Gunties and Teases team up for Disney Whirled!

GET READY for an evening of moving, masquerading, and Mouseketeering. Savannah drag troupe House of Gunt and the Savannah Sweet Tease Burlesque Revue have teamed up to present a whole new world of entertainment with Disney Whirled, an ode to one of the universe’s most beloved franchises.

With so many opportunities to play with gender, challenge a sacred corporate entity, prod neatly-packaged values, and explore double entendre—not to mention all those subliminal messages hidden within many animated features (the, uh, excited priest in Little Mermaid, anyone?)—cross-generational Disney is a performance art goldmine.

Max Arnzen (House of Gunt’s Influenza Mueller) and Anita Narcisse (Savannah Sweet Tease’s Rita D’LaVayne, née Erin GO Brahless) say that a collaboration between the two groups was a long time coming. Gunties have guested at Sweet Tease shows and vice versa, but finally, they’ll take the stage together in a true co-production.

The troupes vocally share sweet admiration for one another. Both boast a penchant for blurring lines and skewing tradition—the Teases take on hilariously irreverent material and the Gunties go above and beyond the pale, reveling in lowbrow art and celebrating bearded drag long before glitter beards inundated the Internet.

A lot of love, care, and practice has gone into making Disney Whirled an ultimate, all-engrossing experience. Expect to see staples like Mary Poppins, portrayed by The Tease’s Regina Lee Snatch, Rachel Fauxrelle as Pocahontas, and Magnolia Minxxx as Cinderella, but get ready for some surprises and unusual twists, too.

“Everyone has a [drag or burlesque] persona, then they have the [Disney] character or attraction,” explains Arnzen. “The smartest thing you can try to do—and, I think, in my case, being Influenza Mueller— is ask, ‘What’s Influenza’s take on that?’ I think everyone is giving all these characters not a back story, but an alternate reality to what that Disney character would have done. This is their real life.” 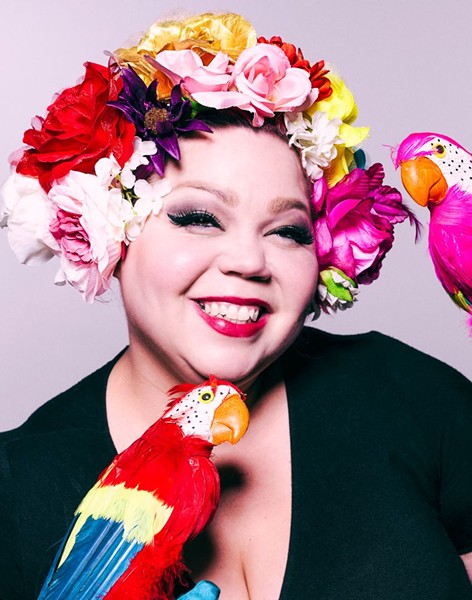 Influenza will take on the character of Madame Mim, the hysterically abrasive witch from The Sword and the Stone. It’s a deep cut, but it’s a perfect fit for Influenza.

“I do take after some of the frumpier characters in Disney,” says Arnzen with a smile.

“I would say Disney’s always influenced me as a person in ways of reacting against it,” he suggests. “It hasn’t really come through in my drag aesthetic; however, the matchmaker from Mulan is a really good reference point for Influenza.”

“I fell off at Little Mermaid when I was like, nine,” says Narcisse of her own Disney connection. “I was like, ‘She left her family for this dude? What?!’

“Disney has evolved and changed, and it’s not necessarily stuff I’m drawn to, but now that I’ve translated it into a performance piece, I love a challenge. I like to push myself, like every concept for every show.”

Instead of going for a character, Narcisse’s Rita D’LaVane will embody iconic Disney theme park attraction The Enchanted Tiki Room.

“This is Rita’s Enchanted Tiki Room,” she says of her two-song routine. “And apparently, she’s really bougie!”

Teaming up has been a learning experience for both troupes.

“We rehearse as a collective,” says Narcisse of the Tease’s show preparation. “You gotta come to three of the six rehearsals.”

House of Gunt doesn’t hold full-troupe rehearsals—it adds to the heat-of-the-moment spontaneity and freshness of their acts—so run-throughs were new to them.

“We were stepping into that world,” says Arnzen. “For better or worse, you can see it, and it’s why we’re so different and why this is such a great collaboration.”

With no DJ and no band added to the lineup, Disney Whirled is set to be one of the biggest drag/burlesque productions Savannah has seen, chock-full of solo acts.

“We try to curate it to build the energy,” Narcisse says of the evening’s flow. “The order came up by light and dark, Gunt and Tease, sort of staggering throughout, so it’s not a crop of villains in the middle of the show or the first five routines are all [Sweet Tease].”

There are two chances to catch the show: Friday night at The Jinx, and Saturday night at Ampersand. The troupes look forward to reaching new and different audiences at both venues.

“I feel like it’s hitting our demographic all the way around,” says Narcisse. “Some people can’t make Friday or Saturday...some people who usually come to Jinx come to the Ampersand show. They’re experiencing a different venue, and it opens them up to come see us there in the future.”

There’s a chance we might see more Disney-themed fun from the Sweet Teases in the future. In the meantime, it will be a treat to see some of our top local talents working alongside one another.

“We’re always wanting to go further outside the box every time,” says Narcisse. “It’s really good to feed off of different people’s energy.”

“Wholesome values is what Influenza is here to destroy,” says Arnzen devilishly. “I think it’s definitely a good thing to react against throughout life.”