DOWNTOWN SAVANNAH is famous as a pedestrian-friendly, walkable area, where destinations from River Street to Forsyth Park are readily accessible on foot, by bike, bus or car. That should be the standard by which we judge any new civic venue in Savannah.

For the new Westside Arena, to be located near West Gwinnett Street and Stiles Avenue, meeting this standard will be near impossible. The problem is both geographic and psychological in being too far for a comfortable walk from downtown, and being a walk that would have to traverse unwelcoming industrial landscapes and large highway overpasses.

Realistically, most people will want to arrive by car, but there will not be enough parking on site unless tremendous garages are built—at great expense and potentially reducing the desirability of the area as a destination.

Parking will be the focus of my next article. For now, let’s consider the broader question of accessibility, something the current Civic Center enjoys in abundance.

The proposed arena site is not realistically walkable from downtown Savannah for most people.  The closest intersection within downtown is MLK Jr. Boulevard and West Gwinnett Street, more than ¾ of a mile or an 18-minute walk to the east.

This alone is more than the width of downtown from East Broad Street to MLK. 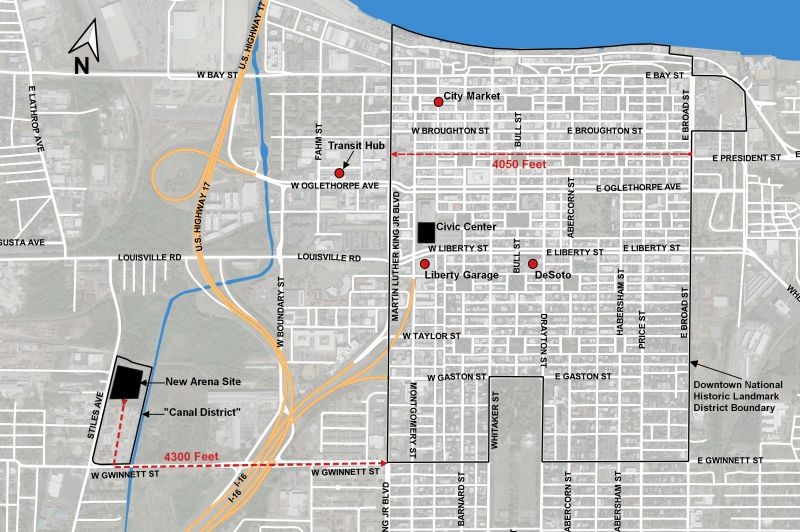 Most people, however, would more realistically depart from areas of downtown farther to the north or to the east. From the Liberty Street Garage or Forsyth Park to the new arena is 1.2 miles, from the DeSoto is 1.6 miles and from Ellis Square is 1.8 miles (36 minutes).

All of these distances are well above the half-mile limit planners generally assume people will walk to destinations.

And how pleasant will that walk be during Savannah’s 95-degree summer days and frequent thunderstorms? At issue is not whether the walk is possible, but whether it is a realistic expectation for many visitors.

Beyond issues of distance, the quality of a walk matters tremendously. There is a vast difference between a ¾-mile stroll across one of the prettiest historic downtowns in the country and a trek along West Gwinnett in an industrial landscape next to speeding cars and under multiple highway overpasses.

Via Gwinnett you would have to pass under three containing seven lanes of traffic; via Louisville Road and Stiles you’d pass under four lanes.

Decades of experience teach us that highway overpasses in cities are both real and psychological barriers. The city of Boston spent billions of dollars to bury the elevated highway that had cut the city off from its waterfront.

Depending on your route, the walk also passes either Chatham Steel and a carwash or a minimum-security prison and petroleum storage facilities.

Land uses can change, of course, so it’s possible that one day the area will host a great variety of shops and restaurants. Even assuming polluted soil can be mitigated and sites found amidst the generally unsuitable swampy terrain, that day is many years away. 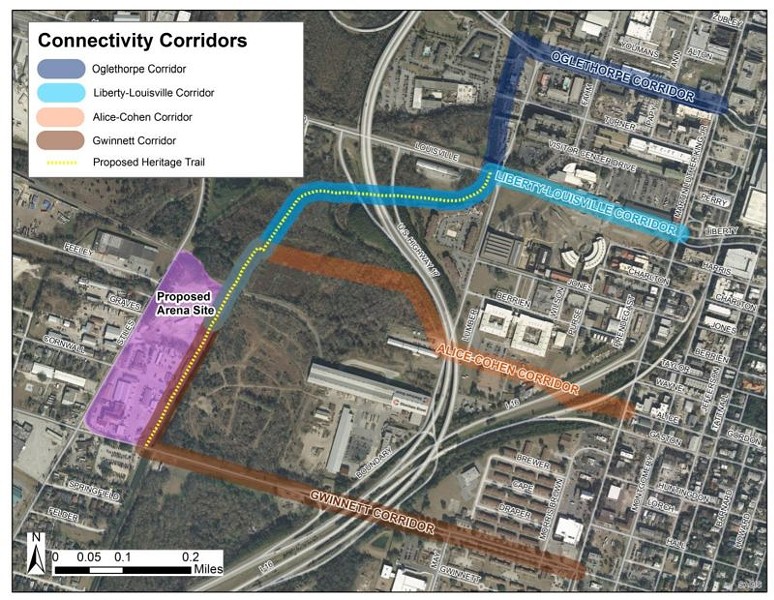 To improve accessibility to the arena site, the City’s plans call for extensive pedestrian and vehicular improvements to both on Gwinnett and Stiles, but these are working at cross purposes.

According to the feasibility study authored by the consultants hired by the City, both streets will be widened to four lanes and additional traffic signals added to meet the anticipated increase in vehicle traffic.

The streets will also gain sidewalks and possibly bike paths, but the reality is that more and faster cars make walking less friendly to pedestrians.

It is the difference between walking on DeRenne and walking on 37th; pedestrians simply prefer narrower streets.

While welcome, sidewalks can only do so much to remedy the near-total lack of shade and points of interest. Wider streets and lengthened traffic light cycles mean more arduous crossings, encouraging dangerous jaywalking.

In the end, no amount of nice new sidewalk will compensate for the sterile and unappealing surroundings. And what about the walk back in the dark at 10 or 11 pm following an event?

Many of the same concerns apply to bicycles. Just like pedestrians, cyclists want to feel safe and travel in pleasant surroundings.

While trips from downtown could be under 15 minutes, the reality of riding next to a busy four-lane artery and returning in the dark is discouraging.  Planners should always aim at the typical cyclist and not the “road warrior” in Lycra.

While Savannah has a greater share of bicycle commuters than most Georgia cities, the fraction is still under 3 percent and largely a function of the SCAD population, according to a City staff report.  It seems extremely unlikely, then, that cycling will account for a meaningful share of trips to the arena.

Aware of these constraints, the Canal District Mobility and Transportation Subcommittee made several proposals for improving connectivity with greenways and a multi-use trail along the canal. Greenways in Savannah are long overdue, but they are not a site-access panacea.

As presented in the subcommittee’s November 2015 report, proposed routes wind through primarily forested and undeveloped areas, some of which will feel quite remote. People are unlikely to feel safe walking or cycling through these points, especially at night.

As noted in their report, the distances to western part of downtown range from 0.8 of a mile to MLK and Liberty to one mile to MLK and West Oglethorpe (see illustration). 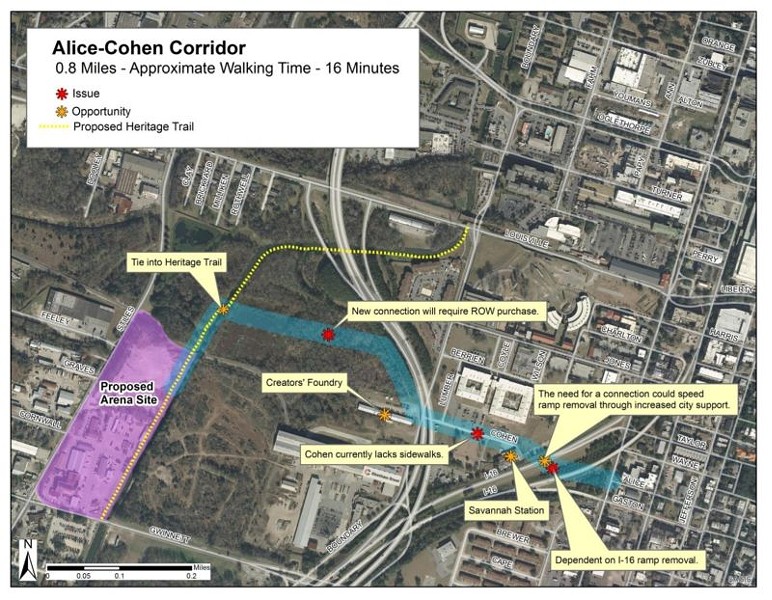 The proposed connection via the Cohen Street “Pedestrian Corridor Extension” hinges on removing the I-16 ramp and acquiring a new right of way, all to shorten a handful of pedestrian trips by a few minutes.

If proposed as a recreation corridor, it’s a fair idea. As a convenient way to reach the arena, it falls flat.

Any discussion of non-car transport is moot for the large proportion of arena visitors who don’t live near Savannah. If the current Civic Center is any guide, approximately half of large event attendees will come from outside Chatham County, according to the arena consultants’ report.

These visitors are unlikely to bother with sidewalks, bike lanes or garages downtown and will expect to drive directly to the arena and park nearby. Even if they were willing to park and walk or take shuttles, one can hardly expect them to know where and how.

Consultants estimate that just 5 percent of arena visitors will bike or walk, but even this feels optimistic given the share of out-of-town visitors and steep barriers to pedestrian access.

What about the current Civic Center?

With access issues for the new arena readily apparent, it’s worth comparing the proposed arena site to the present Civic Center. While the Civic Center deserves the many criticisms leveled against it—a large and ugly parking lot, insipid and out-of-scale architecture, disruption of Oglethorpe’s plan and lack of strong relation to surrounding streets—in terms of accessibility, there is much to celebrate.

It is within easy walking distance of a broad swath of historic downtown, including SCAD dorms, the Visitor Center (with ample tour bus parking), the city’s transit hub and most of the core business and entertainment areas.

It sits between two major avenues that together with Montgomery Street account for nearly all the traffic from points north and west into downtown.

In stark contrast to the proposed new arena site, the current Civic Center is near several parking garages, including the city’s 882-car structure across Liberty Street, which usually has plenty of excess capacity (according to the City’s August 2015 “Parking Matters” report).

Visitors without cars have no problem reaching the Civic Center as there are hundreds of hotel rooms within a 10-minute walk. Numerous CAT (Chatham Area Transit) bus routes pass nearby and Greyhound buses from around the Southeast terminate two blocks away.

No doubt, bus routes can and probably will be adapted for the proposed arena, but the Stiles Avenue site will never have the advantage of a multi-modal transit hub in its backyard.

For anyone taking a bus from outside downtown, they will then have to wait and transfer to yet another bus to get to the arena and then repeat the lengthy operation in reverse to get home. For those with a social justice bent, this is a serious equity issue.

Public perception of the arena and its surroundings are instrumental to its success. According to Bob Coffey, former general manager of the Savannah Trade and Convention Center, the location of an arena in part determines the type of events it can host.

While giving a presentation to a City Council work session on February 12, 2016, Coffey asserted that “location affects programming: to attract and sustain a suitable event demand mix is dependent on patrons’ perceptions of comfort, safety and fun.”

As it stands, the new site is zero for three.  It is very possible that if accessibility to the new arena site is perceived to be arduous, unsafe or both, that could very well impact visitors’ sense of comfort and safety.

Coffey added that “there is nothing more distressed looking than an arena with nothing going on around it.”

For proponents of the development of the Canal District, the new Westside Arena will spark its economic resurgence.  The feasibility of this economic vision will be analyzed in a future article.

Next week, we’ll explore parking issues (including shuttles), where a close look suggests that rather than a vibrant, regenerated district, we are far more likely to get towering garages and a sea of pavement.

This is the second segment of a multi-part Special Report analyzing the proposed new Westside Arena. Next installment: Parking.

Marcel R. Williams grew up in Savannah and holds a Masters degree in City Planning. He has long been fascinated by the unique history, nature, and potential of Savannah's urban form.