TONY COPE may live in Ireland now, but he’s still a Savannah writer at heart.

“Hail to the Chief, Y’all! Presidential Visits to Savannah, Georgia” is Cope’s latest book. Released last week and available for purchase at E. Shaver Booksellers and on Amazon, the book is a collection of stories about the presidents who have visited our city, from George Washington to Barack Obama and all the men in between.

Cope, who is the author of four other books about Savannah, will host a book signing and discussion at E Shaver Booksellers on Dec. 8 at 3 p.m.

We spoke with Cope last week.

How did you first become interested in presidential visits to Savannah?

As a long time Savannahian, before retiring and moving to Ireland, I have always been interested in Savannah’s history. Being away for almost 30 years I am even more interested. I guess it keeps me connected to my home town.

I belong to a discussion group here [in Ireland] and not so long ago dicussed things you may not know about American presidents. There is a big Irish interest in U.S. presidents and they claim about half—rightly or wrongly—of them as having some Irish ancestry. That topic got me wondering about presidential connections to Savannah. 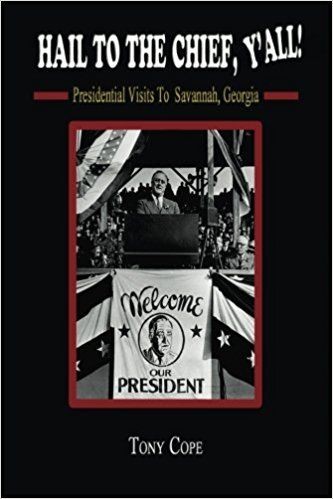 How much research did you take on for this book?

I have done quite a lot of research for the book over the past year. Not easy being four thousand miles away from the topic, but I have a good personal library, found much on the internet and was able to get much information from presidential libraries and other sources and from friends in Savannah.

What’s the real story behind Jimmy Carter standing on the bar at Pinkie Master’s?

Tell us some notable things you learned about the presidents.

George Washington and James Monroe spent several days in Savannah. Presidents in the more modern era generally spent just a day or part of a day as travel was much easier and the could visit many cities on a single short trip. Cleveland was in the city for just one hour to attend the unveiling of the Jasper Monument. Taft and Truman were fun to research because of the stories of them by local people. There is a great one about Truman in the book from Dr. Julius “Boo” Hornstein, my oldest friend, but I don’t want to give that away.

One president visited the city even though the City Council voted unanimously not to invite him and not to spend a penny on a reception if he came. Ironically, one who had a few years earlier been the hated enemy was invited and graciously received.

Many presidents were very complimentary during and after their visits. Washington, while being positive about his visit, also voiced a criticism or two. Many of the early visitors were struck by and commented on the beauty of Savannah women, George Washington in particular.