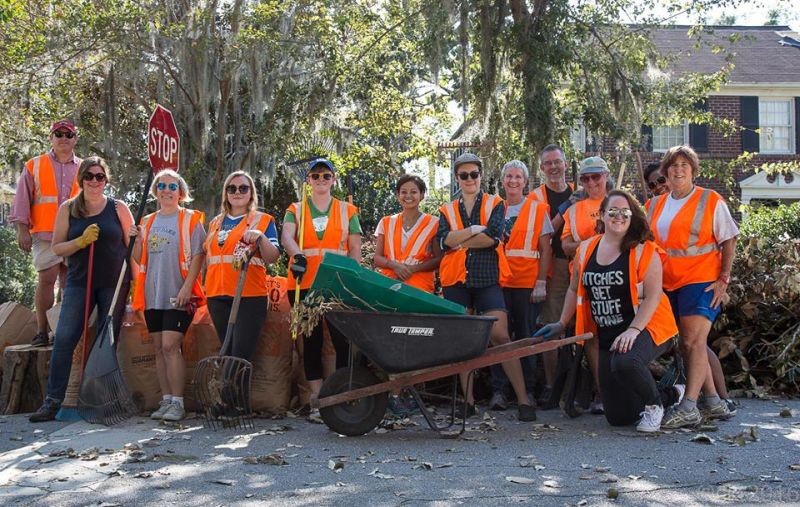 FOR THE MAN on the bicycle, the crash probably seemed like it happened in an instant. But from my perspective, viewing it through the windshield of my car, it transpired in slow motion.

As he tried to steer around debris blocking his way, he began to wobble, and finally tumbled into the center of the lane. I recognized him as a regular bicycle commuter, no stranger to riding on Savannah’s streets.

The debris that took him down likely would have had gotten me, too, I thought. He and his bike were mostly unscathed.

As a driver, I add a generous multiplier to Georgia’s “Three Foot Passing Law” when following or passing people on bikes. Had a more typical Savannah motorist been following him, this scenario could have ended much differently.

This incident illustrated the predicament many have faced since Hurricane Matthew: As our community recovered from the storm, conditions grew worse for those who travel by bike.

Bike lanes and other areas of roadways used by cyclists, that were clear immediately after the storm, were soon being filled with debris from yards and parking lots. Pedestrians, and particularly wheelchair users, faced similar situations all over the city.

City crews and contractors have done heroic work at a task of truly staggering scale. And city leaders have wisely tried to keep the clean-up schedule from becoming politicized, from pitting neighborhood against neighborhood.

That’s why, I was told, the tiny fraction of city streets that have bike lanes were not given elevated priority. The unfortunate and unintended result?

Debris was cleared from two parking spaces on my block, which my neighbors and I got along just fine without, while nearby bike lanes that are used by thousands of people from dozens of neighborhoods every week remained blocked.

In the wake of the storm, I was reminded that people who ride bikes are often not a priority. Not that I needed a reminder.

They are not a priority for our daily newspaper, which published an editorial affirming the rights of people who ride bikes, after a hit and run driver killed Dr. Deborah Ann Wilkowski, then promptly resumed making clickbait from Vox Populi comments denying those same rights.

On Oct. 30, however, people who ride bikes were a priority for 13 volunteers. They gathered at the corner of Washington Avenue and Habersham Street with a mission in mind.

Working their way north to Victory Drive with rakes and pitchforks in hand, they filled 50 lawn and leaf bags and moved huge limbs and sections of tree trunks nearly two feet in diameter. A couple hours later, the bike lanes were clear.

Some of the volunteers lived nearby. Others came from Gordonston, Thomas Square, Baldwin Park and other neighborhoods to help out in Ardsley Park.

Among them was Paula Kreissler, who singlehandedly cleared the Lincoln Street bike lane from Victory Drive all the way to Liberty Street the week after the storm. Some debris has reappeared since these citizens did their good deeds, but city officials suggest they may be more responsive now.

Am I making a big deal out of nothing? Can’t people on bikes just steer around the debris like the guy on the bike described above, just more skillfully?

Yes. They will have to on Habersham Street south of DeRenne Avenue, where the lanes are still blocked a month after the storm.

State law permits people on bikes to move to the center of the lane to avoid hazards and stay there until it is safe to return to the right side of the roadway. But just because this practice is legal, doesn’t mean drivers agree.

People who responsibly and legally “take the lane” should not be surprised by yelling, blaring horns, and other delightful behavior exhibited by impatient drivers.

I try to reassure people that if someone is screaming at you, at least that means they see you. But for some folks, it’s just not worth it.

I talk with people all the time who have given up cycling — an otherwise enjoyable and healthy activity —because of encounters with aggressive drivers. For the thousands of Savannahians who use bikes as their primary mode of transportation, they have no choice but to “share the road,” with motorists who have no intention of returning the favor.

Still, thanks to 13 volunteers, for whom the safety of others is a priority, they now face fewer hazards.