Unusual commute is part of an increasingly common trend 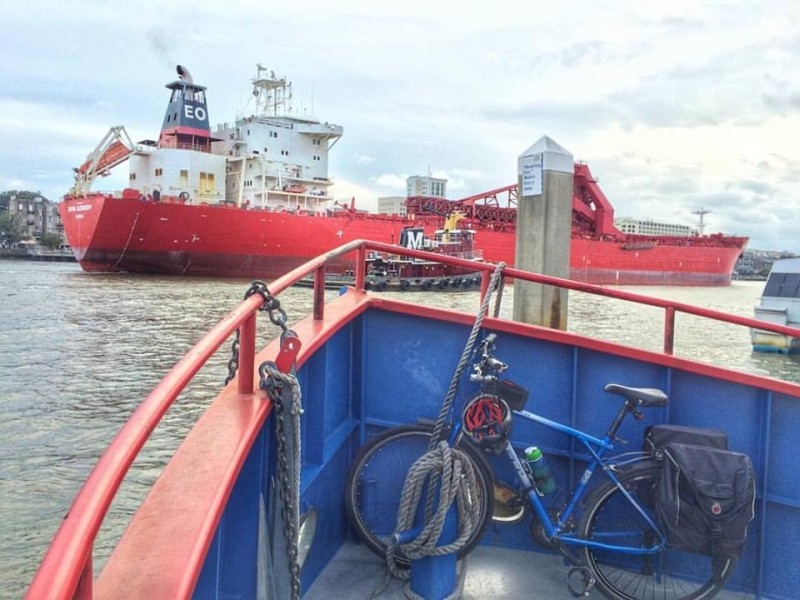 GORDON PARKS has a unique way to get to work. He commutes by bike.

Every workday, Parks rides his bicycle from his home in the Starland District to River Street. There he boards Chatham Area Transit’s Savannah Belles Ferry to reach his job at Wallenius Wilhelmsen Logistics on Hutchinson Island.

Parks has a lot more company out there these days, at least on the bicycle part of his commute. The League of American Bicyclists recently released its annual “Where We Ride” report, which measures trends in commuting by analyzing data from the Census Bureau’s American Community Survey.

Savannah now has the seventh highest rate of bicycle commuting in the South, up from 10th last year. Among U.S. cities with populations between 100,000 and 200,000, we advanced to 15th place from our previous position at No. 20.

Census data reveals that 2.6 percent of Savannahians get to work by bike, but this number drastically under counts bicycle commuting, as it does not measure college students who ride to class or people who do not ride to work every single day.

Some people bike to work out of necessity, others by choice. Parks was nudged into bicycle commuting by a blend of circumstances.

“The main reason I started commuting was my health,” Parks said. “I’m 43 years old and had high blood pressure, high cholesterol and had just been diagnosed with type II diabetes,” he says.

“My wife, Nicole, had found a wonderful group of supportive women called Stroller Strong Moms. They work out a few times a week in the early morning with their kids in tow. My wife began to encourage me to join her in some workouts, but I kept making excuses.”

“I wanted my son to grow up being active and rambunctious, emulating both of us,” he said.

His other reason for trying bicycle commuting is a little less inspiring.

“I’m almost ashamed to say it, but I wrecked my car,” Parks said. “That played a large part in the decision.”

Either way, the results of commuting by bicycle have been beneficial both financially and physically for Parks. He’s saved money and now weighs what he did when he completed Army basic training in 1994.

His advice to anyone who is considering bicycle commuting is simple: Stick with it.

“Accept the fact that initially it’s going to suck until you find your rhythm and the equipment that works best for you,” he said. “However, once all of that falls into place you will start reaping the rewards.”

Parks has even found an artistic angle on riding to work. He posts photos from his commute on Facebook and Instragram and has received an enthusiastic response.

“Everyone has been really nice and I began to realize how lucky I am to have many different routes that I can take each morning,” he said. “I’m to the point that I feel guilty if I don’t ride.”

The abundance of commuting routes available to Parks is due more to Gen. James Oglethorpe’s city plan than to more contemporary transportation projects.

The only northbound bike lane in the historic district is a mess, despite some repairs recently completed by the Streets Maintenance Department.

Parks puts repaving Lincoln Street and moving the bike lane to the correct side of the street at the top of his wish list for infrastructure improvements.

While cities around Georgia are investing millions in bike infrastructure projects, it’s been more than three years since the official dedication of the Price Street bike lane, the last significant addition to Savannah’s bicycle transportation network.

The good news is a number of candidates in the upcoming election, including Mary Ellen Sprague, Julian Miller, Eddie DeLoach and Kim Dulek have voiced support for more bicycle infrastructure.

For his part, Parks is making it possible for more Savannahians to commute by bike as a volunteer with the Savannah Bicycle Campaign’s New Standard Cycles program. He spends several hours each week reconditioning donated bicycles, which are given to deserving individuals who need safe, affordable and dependable transportation.

Parks urges drivers to be patient, for the sake of these folks and others who use bicycles to reach their jobs and other important destinations. The often futile attempt to arrive a few seconds earlier isn’t worth endangering someone’s life.

“When you’re speeding around the squares downtown, the amount of time you’re saving is insignificant,” he said.