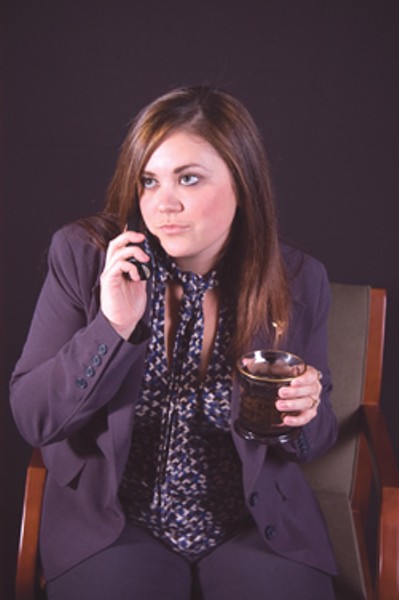 Belles is a play that tells the story of the six Walker sisters, who grew up in Memphis.

Over the years, they have moved away and now all six are scattered across the country. The play will be presented Nov. 30 through Dec. 2 by the Armstrong Atlantic State University Masquers.

Each sister has her own distinct personality, which audiences get to explore because they keep in touch by telephone. The oldest, Peggy, keeps the others updated about their mother’s illnesses.

The second, Aneece, is a bitter alcoholic. Roseann is the wife of a minister -- who is in the process of leaving her.

Audrey is the eccentric sister, a ventriloquist, while Sherry has gone New Age and wants everyone to start calling her “Dust.” Finally, there’s Paige, the youngest, who is looking for a man.

Director Michelle Fekete is a senior at Armstrong who is majoring in theater and will graduate next December. She chose the play not only because it was written by a Southern playwright, but also because she thinks it will speak to audience members.

“The playwright, Mark Dunn, calls it ‘a play in two acts and 45 phone calls,’” Fekete says. “We have a lot of phone conversations.It was definitely a challenge because everyone is on the phone. We don’t get the luxury of showing people’s connections through interactions.”

That’s because of the distance between the sisters. “One might be in Atlanta, while the other is in Seattle,” Fekete says.

While the play is a comedy, it does explore some difficult, even tragic, moments in the sisters’ lives. “They’ve all grown up in the same house, and gone through the same things,” Fekete says.

“Each sister takes a different approach to how she handles life.”

There are only six characters in the play, and the sisters are on stage at all times. “Each one has her own section she must stay in,” Fekete says.“I was a little concerned about that at first,” she says. “You must keep the audience’s attention. But it is a really fast-paced show.”

The sisters don’t only talk to each other, they also talk to friends. “You don’t hear the other person’s part of the conversation,” Fekete says. “But you know what they’re saying by the characters’ reactions.”

The audience learns about each of the sisters through her conversations with others. “They also talk about each other, and you learn even more,” Fekete says. “You find out more about one sister through conversations between two other sisters.”

Each sister has something unusual or quirky about her, Fekete says. “And each of them have a good quality about them,” she says. “The audience members will each have a sister that they just love.”

The play will be presented at the Armstrong Center, a somewhat unusual location. The Masquers’ home, Jenkins Theater, is undergoing a 12-month total renovation.

At first, plans outlined last spring projected that the troupe would have to vacate Jenkins before the start of fall semester. However, the closure was delayed just long enough to allow the Masquers to present a few performances there.

The troupe is expected to move into new temporary headquarters at the AASU Chinese Theater, a former Chinese restaurant located in the Armstrong Center. However, preparations to that space haven’t been completed, so Belles will be presented in a meeting suite at Armstrong Center.

Fekete has appeared in many Masquers productions. “I am a Southern girl, born and raised in the Lowcountry of South Carolina,” she says.

Fekete grew up watching movies and television. When she was 18 and 19, she appeared in productions for CBS and NBC.

Fekete was cast in other productions. “I never got the lead,” she says. “I always got a small part. It’s really difficult to get cast when you have hundreds of people trying out for the same role.”

At AASU, Fekete has played the lead, she’s directed, and been involved in all aspects of theater. “That’s the great thing about Armstrong,” she says. “Everyone has the opportunity to perform, work on the tech side, design or direct. I love it all. I’m just as happy off-stage as I am on stage.”

Because of her role in How I Learned to Drive, Fekete has been nominated to attend the Kennedy Center American College Theater Festival, where she will compete with other college theater majors from around the country.

“Nothing is set in stone,” Fekete says. “I’d love to go to graduate school. I have every intention of keeping on auditioning and performing. I’m married and have a child, and that takes precedence, but I’ll always be involved in theater.”

Fekete hopes Belles does well. “Everyone has put so much effort into it that we want everyone to come out and see it,” she says.

“There are some great, funny moments so many women can relate to,” Fekete says. “It has a great story with a very serious meaning. It’s about family, forgiveness and all the stuff families go through. You don’t have to have a sister to enjoy this show.”