Tune in with Savannah Stage Company

IN ITS "Season of Values," Savannah Stage Company is using the holiday season to push the limits of imagination.

Under the direction of Wesley Pridgen, a cast of five will use their voices to bring the seasonal classic It’s A Wonderful Life to a live audience. Don’t expect a traditional retelling of the 1946 film, though—in Savannah Stage Company’s world, the beloved tale of George Bailey, his family, and his community will be told as a live radio broadcast.

As a troupe that prioritizes physical, action-driven storytelling, it’s a whole new way of sharing stories and challenging actors. 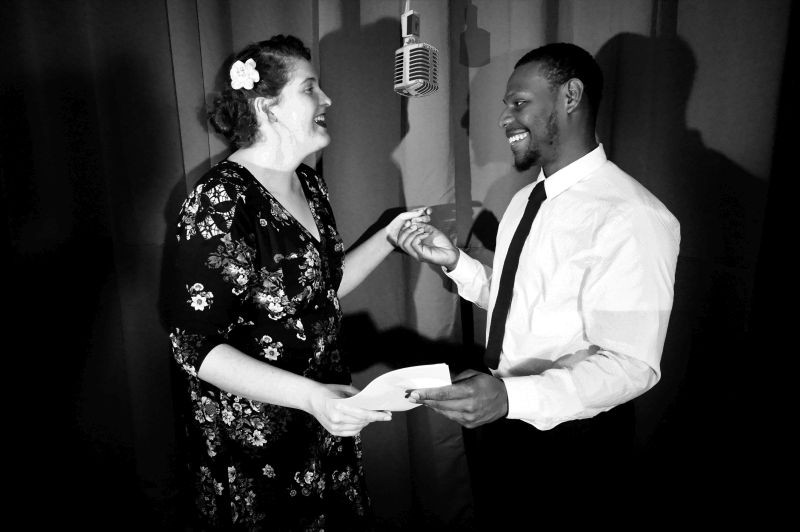 “This play is so focused on things we as a company don’t necessarily focus on,” says Artistic Director Jayme Tinti. “Most of our stuff is so physical. You think of something like Call of the Wild where we’re sweating bullets two sessions into the thing because it was so physical. We’re exercising a different group of muscles than we’re used to.”

It’s A Wonderful Life may be a Christmas movie, but its message is worthy of celebration year ‘round. The film tells the story of George Bailey and a visit from his guardian angel, Clarence Odbody. On Christmas Eve, George is contemplating suicide when Clarence comes to save George so that he may earn his angel wings. Clarence guides George through his life, showing how he’s helped others along the way.

The stellar cast includes Savannah Stage Company founding member Bryan Pridgen, company member Ashley Cooke, McKenna Lyons who got her start with SSC in Call of the Wild, and SCC newcomers Mason Houseman and Christian I. Noble, who takes the lead as George Bailey. Each talented performer must take on several speaking roles in It’s A Wonderful Life; some have up to 15 roles to play.

Audiences will also see a variety of props onstage.

While the internet has been a great resource for learning about sound effects, hands-on time has been invaluable to the SSC crew.

“There’s been a lot of experimenting between Wesley and the cast to figure out what sounds the best,” says Tinti. “That’s a cool part of the process. It felt more collaborative. Wesley went in there with a great setup, then he had five more sets of ears. A pack of cards, opening up and flipping through them, that sounds like money in the context of this play. A cool-guy comb, running your finger on that, it sounds like crickets. We put a playing card in a bicycle wheel, that’s the sound of a car.”

“What Wesley has said in rehearsal is that he’s directing the show for someone who’s blind,” she continues. “The idea is not being able to have sight and have everything you know coming through your ears and having that be a vehicle of imagination.”

There are also visual elements to the production. Expect to see costumes and warm moments of simple choreography and staging that lends itself to the story.

November is a busy month for SSC. In addition to It’s A Wonderful Life, the crew hosts its annual announcement party and fundraiser on Sunday.

At Fall in Love with SSC: Season Announcement Party, guests will enjoy teasers of the upcoming season’s productions, hors d’oeuvres and cocktails, a silent audition, a wine pull, live music, and much more. The event will be held right up the street from Space Cat Books’ stage at Bull Street Labs.

“They’re the nicest people in town right now,” says Tinti. “They’ve been really generous and we’re really excited to be able to work together.”

The celebration follows Sunday’s matinee performance of It’s A Wonderful Life. As we enter the season of generosity, it’s a perfect day for opening the ears, wallets, and hearts to live, local art.

$15 or pay-what-you-can via brownpapertickets.com

$15 (or $25 for performance and party combination) via brownpapertickets.com