Toast to the Coast: Signature cocktails raise funds for 100 Miles

AS IF we needed another excuse to knock a few back around here, ordering a round of adult beverages can be a charitable act this month: Environmental advocacy group 100 Miles has launched a fundraiser that quenches our thirst while shining a spotlight on Georgia’s precious coastal ecosystems.

Each of the restaurant’s resident mixologists has come up with their own unique “Spartini,” available at the bar or with table service as a drink special. For every one shaken and/or stirred, a dollar will be donated to 100 miles through the end of April.

“We thought this would be a fun way to highlight our mission, which is to protect, preserve and enhance the Georgia’s hundred miles of coastline,” explains Kelly Patton, 100 Miles’ membership and outreach coordinator.

“Partnering with some of our wonderful coastal businesses that focus on fresh, local ingredients shows why this is such a special place.”

Some of the cocktails come in a traditional stemmed martini glass, though Lulu’s Chocolate Bar forsakes the vermouth for Pearl cucumber vodka, St. Germain elderflower liqueur, fresh-squeezed lemon juice and a splash of bubbly.

“It’s crisp and fresh, like spring flowers,” describes Lulu’s co-owner Janine Finn. “And we have a tendency to top everything with Champagne around here!” 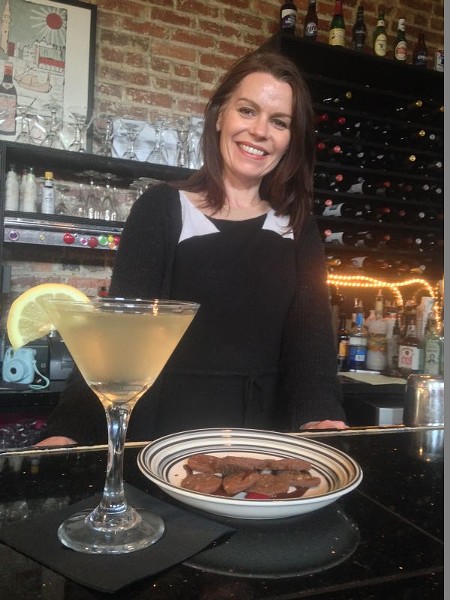 A generous participant in hundreds of fundraisers since it opened in 2007, Lulu’s will host a special Spartini night on April 19, donating half the evening’s proceeds—on top of the dollar per $9 drink—to 100 Miles.

The Wyld Dock Bar has a different take on the Spartini, presenting its crafted creation into an icy highball tumbler. Bartender and general manager Nicholas McNabb calls the gin-based cocktail “The Sparteum Rush,” with tasty elements of housemade honey syrup, lemon juice and rose-flavored Adelaide liqueur.

“I was really trying to make something refreshing and capture the beautiful colors of the marsh,” says McNabb.

“We’re lucky at the Wyld that we get to look out on to it every day.”

Over at the Tybee Island Social Club, the Spartini takes on an exotic flair with a generous pour of VeeV spirit, a distilled grain alcohol derived from açai berries, acerola cherry and prickly pear. A lil’ limoncello is added to a pair of lemons, and the whole shebang is shaken, strained and finished with a bit of Champagne and a sprig of fresh rosemary.

“Rosemary is our signature and logo, so we decided the drink should be light and refreshing like the ocean air,” says manager Jimmy Prosser, who serves them up in a stemless martini glass that’s a perfect seaside vessel.

Out of the 12 restaurants participating in the Spartini fundraiser, the three above lie within a local’s reach. If you’re road-tripping or sea-faring over the next month, you can seek out the other participating venues, including Basil Thai and Sushi and The Southern Table in Brunswick, plus Latitude 31 and The Driftwood Bistro on Jekyll Island. Those planning to head to St. Simons Island can booze cruise between the Blackwater Grill, Georgia Sea Grill, Halyards, The Rooftop at Ocean Lodge and Tramici Neighborhood Italian.

Georgia’s salt marshes make up a third of the total salt marshes on the East Coast, fed and filtered by the twice-daily tides. The shimmery ecosystems serve as home to diverse wildlife and as a buffer against hurricanes and flooding and are under constant threat from pollution, development and other human activities.

100 Miles works to educate communities about the importance of the preservation of these fragile environments. It is part of the Georgia Coast Cooperative, a coalition of 13 other conservation organizations, including the Nature Conservancy.

Most recently, 100 Miles was one of the leading advocates against offshore drilling on the Atlantic coast, an effort that ended in success recently when the White House announced it was tabling its proposal to offer five year leases in the ocean to oil companies.

That’s good reason to raise a glass, and 100 Miles’ Patton hopes thirsty coastal dwellers will support the Spartini cause.

“Right now we’re really in a victory moment,” she says.

“It’s a good time to celebrate.”