IN THE first installment of the Starland Village Files — all drawn from emails in the public record — we learned of the City’s strenuous efforts to work closely with The Foram Group, the developer behind the controversial, $40 million modern mixed-use development in the Victorian neighborhood, opposed by many residents mostly for its sheer size and incompatibility with other buildings in the area.

This week we take a closer look at the Request for Proposals (RFP) to purchase a police precinct, and the battle over zoning.

AS EARLY as January 2017, the president of The Foram Group, Travis Stringer, has a breakfast meeting with Mayor Eddie DeLoach, City Manager Rob Hernandez, and the City’s Strategic Initiatives Manager, Liz Tascherau, who previously worked with Hernandez in South Florida and was hired concurrently with him to come to Savannah.

Foram identifies an active Savannah Police Precinct at 2115 Bull Street as perfect for Starland Village, and lobbies the City to declare the Precinct surplus property, with the City clearly considering Foram the intended buyer.

While Stringer initially emails Taschereau to say, “We would prefer not to go through an RFP process as that is time consuming,” nonetheless the City does initiate the usual legal protocol of putting out Request for Proposals (RFP).

A first round of RFPs goes out in April. Submitting proposals are The Foram Group, Ele Tran (who owns The Vault across the street), and CORE Consulting and Development. 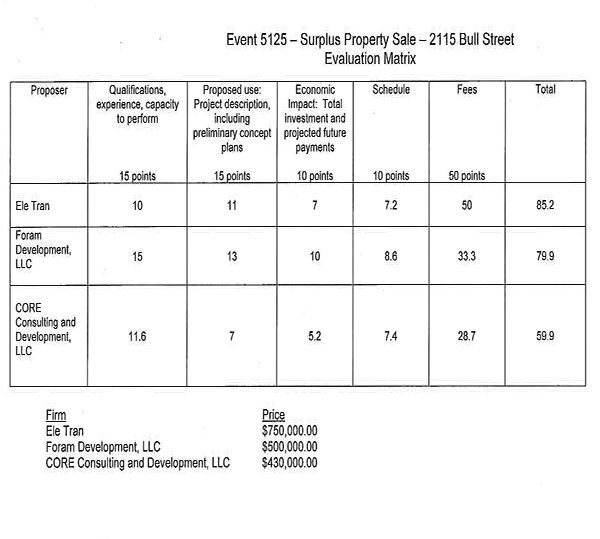 The proposal from Ele And The Chef is for a similar mixed-use development, but smaller than Starland Village and without the controversial parking garage now set for Starland Village.

Ele And The Chef’s proposal not only receives the highest scores from the scoring committee, they also offer the City more money for the property — $750,000 vs. Foram’s offer of $500,000.

The City of Savannah, as they are legally allowed to do, opts to reject all bids that August rather than accept Ele’s high-scoring, high bid.

The City puts the Police Precinct out for bid again, a month later.

This time, Foram gets the high score – though Ele And The Chef’s offered price is again higher than Foram’s.

By November 2017, Foram’s purchase of the surplus Precinct property is finalized.

IN 2018 the focus moves to zoning struggles. Foram wants a brand-new district, TC-3, specifically to accommodate the size and scope of Starland Village, largely not allowed under existing TC-1.

In a Feb. 6, 2018, email response to Foram attorney Robert McCorkle, MPC Director of Special Projects Charlotte Moore says, “Without specific information for each parcel/building, it [is] difficult to prepare an ordinance.... The challenge is providing rationale why a new district is necessary.”

She tells McCorkle, “ As a planner, I’m going to question the following things: Why don’t the existing districts work? Why aren’t variances being requested when possible? Why isn’t a text amendment proposed?”

The next day, McCorkle forwards Moore’s response to Liz Taschereau and to City Attorney Brooks Stillwell, expressing his disappointment with Moore’s progress on writing the ordinance for the new TC-3 District.

“Unfortunately it appears that Staff has not made any progress on the drafting of the Ordinance since our last meeting, Unfortunately, despite our previous meeting it looks like it is being put back on us.   It also appears that they are looking to the website created by a couple of residents that oppose our project as a source of information.”

“This is not what was agreed upon at the last meeting on January 26; this Friday will now be two weeks ago.”

On Feb. 27, the Metropolitan Planning Commission takes up whether to create the new TC-3 zoning district to accommodate Starland Village.

As a deadlock appears to develop on MPC, Foram agrees to take the TC-3 petition off the table in return for an amendment to the existing CIV category instead.

In what opponents to Starland Village consider a moral victory in their battle, Foram is granted zoning to the CIV category by a 9-2 vote on MPC.

(Charlotte Moore is no longer with the MPC.)


THE issue then heads to City Council March 29 for a vote on whether to allow that amendment to CIV to make way for Starland Village.

Despite many citizens taking time to speak against the project — mostly based on its sheer size, and the size of the parking garage — City Council votes 6-3 to allow the zoning change.

At the meeting, an unusual scene develops when Starland resident and entrepreneur Curtis Bellenot addresses Council about “the president that is also getting money from SEDA, who Foram Group gives money to.”

It’s a clear reference to Thomas Square Neighborhood Association President Clinton Edminster, who was a key player in helping secure neighborhood support for Starland Village and who chairs the Board of Directors of The Creative Coast.

The Creative Coast is a project funded by the Savannah Economic Development Authority (SEDA).

Another link is also inferred: Sitting on the SEDA Board of Directors is Loretta Cockrum, a partner in The Foram Group, and Travis Stringer’s grandmother.

The same morning, a letter to the editor runs in the Savannah Morning News from Ele Tran, who unsuccessfully bid twice on the surplus police precinct, expressing her full support for Starland Village.

“I truly believe the entire community will benefit from the added value and community-centric uses of the project,” she writes.


ON April 25, 2018, Taschereau sends Foram’s Travis Stringer and his attorney Robert McCorkle a link to a highly complimentary WTOC story about Starland Village that aired the day before.

“It will be an amazing development and addition to the Starland Village District.  Travis, thank you to you and your family for choosing Savannah,” she writes.


ON July 2, 2018, the first lawsuit against Starland Village is dismissed. The suit, brought by four residents in April, alleged that the City illegally used spot-zoning to push forward the project.


ON Aug. 28, the MPC approves the Starland Village site plan review — despite the MPC’s own staff report saying that virtually every component of new construction in the project is not visually compatible with the surrounding neighborhood.

At the meeting, City Manager Rob Hernandez follows through on published reports earlier in the month saying he would bypass the full MPC and take over as sole “Design Administrator” to approve the project’s Certificate of Appropriateness.

The Mid-City zoning ordinance, adopted in 2005, allows this, saying:

Hernandez’s power play is totally legal, but according to many observers, unprecedented in practice.


ON Sept. 17, a second lawsuit was filed by citizens to stop Starland Village, this one alleging that the City didn’t provide legally required notice on the sale of the surplus property nor on the March 28 adoption of the zoning amendment; and that it’s a violation of state law for the Thomas Square Historic District not to have a dedicated historic review board to oversee the granting of Certificates of Appropriateness.

Significantly, the so-called NewZO (New Zoning Ordinance) under discussion by the City – intended to be a comprehensive modernization of current zoning — would install such a review board when, and if, it eventually passes.