The sounds of the sea

I’VE BEEN working with microphones, headsets, audio editing software and sounds for 25 years. As a radio professional, I’ve always said that audio is a medium very close to you because it requires you to create images in your mind.

And what if you have the images but no sound? That’s the “television on mute” that Gray’s Reef has been until now.

Gray’s Reef National Marine Sanctuary, a federally-protected live-bottom reef 19 miles off Georgia’s coast, has a whole new sense to it now that marine scientists have put hydrophones – underwater microphones – under the ocean’s waves to record its natural and man-made soundscape.

And let me be the first to tell you, it’s a jungle out there.

“To me it sounds very similar to what one might expect while walking into a tropical rain forest at night,” says Kimberly Roberson, the GRNMS research coordinator.

Oyster toad fish, with their grumpy looks, grunt with a low guttural sound. Snapping shrimp, with their large claw, produce what I’ll call “radio static.” Dolphins whistle. And above all this, at times, the rain falls pitter-pat on the ocean’s surface. Yes, they recorded the sounds of a tropical storm underwater. It sounds much like it does on your roof.

“I’ve been a diver all my life and I did notice that it was a rich acoustic environment but I didn’t really know anything about it,” says Jenni Stanley of Woods Hole Oceanographic Institute, one of three lead researchers on the soundscape project, which also studied the sounds of National Marine Sanctuaries off the Texas, Florida and Massachusetts coasts.

Stanley didn’t need 25 years of field work to become interested in underwater sounds like me. She got hooked on the topic in her native New Zealand, where a college professor talked about how fish use sounds to tell them how to migrate.

“Once I heard that lecture, I went to the professor and said I want to pursue this in grad school,” she says.

Stanley also does research on how man-made sounds affect marine life, a topic of great concern nationally as seismic testing, sonar work and ship traffic make the ocean more and more a “sonic soup” that’s simply “boiling over” for everything from zooplankton to Atlantic right whales.

But man-made sounds weren’t the main focus of this project.

“I envision soundscape monitoring as being something that we can utilize to better understand the health of our underwater environment.” Stanley says. “By looking at the diversity of sounds we’re hearing from one day to the next – or one year to the next – and understanding how those sounds are changing over time, it gives us a record.” 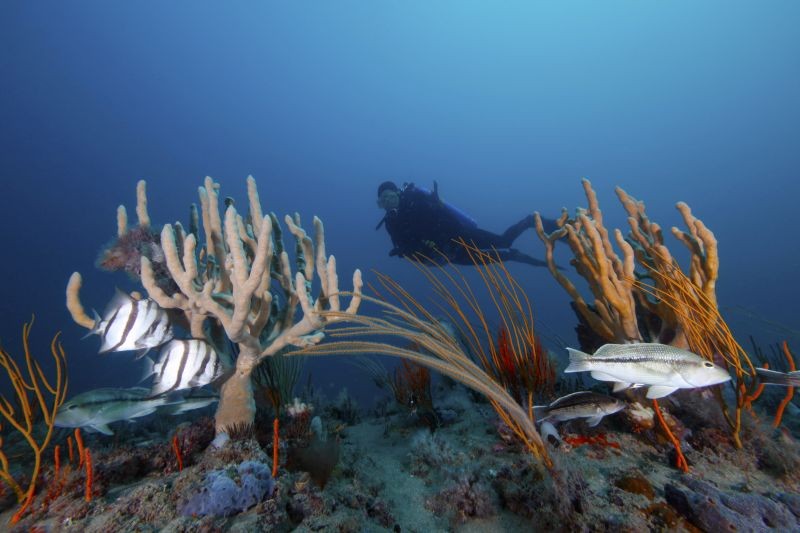 The sounds change from day to night and season to season. They also change from one area to the next. Researchers put one hydrophone near the GRNMS buoy, a large marker known to boaters and where a lot of them hang out.

They put another one in the southern portion of GRNMS, which is the “research only” zone, closed to fishing and diving.

“That allows us researchers to have a comparison between areas that are open to human use and a smaller area within the sanctuary that is closed to human use,” Roberson says.

The made-made sounds at Gray’s Reef include plenty of recreational boaters – the kind of zoom-zoom you hear near-shore – but not as many large ships as recorded elsewhere.

Until there’s an online exhibit of all this research, the sounds remain, like Gray’s Reef itself, largely inaccessible to the general public. But just like we don’t check out every book in the library, we’re glad they’re all there.

I hope that reading about these sounds brought you just a little bit closer, if only in your own mind, to our vast and living seas.