The Oscar Nominations: When in Roma… 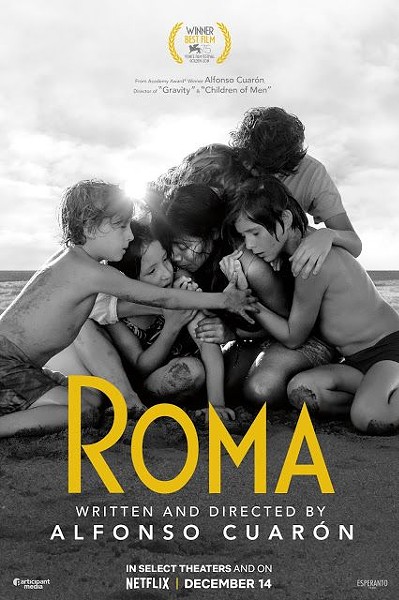 FOLLOWING the recent announcement of the nominations for the 91st Academy Awards, many favorites — or should that be favourites? — still find themselves in the mix while the good fortune of other stars is suddenly stillborn.

Here, then, are the highlights, low points and other notes of interest associated with this year’s crop.

* The 10 Nominations for The Favourite. Director Yorgos Lanthimos’ bawdy period romp earned my vote as the best picture of 2018, so it was gratifying to see it tied with Roma for the most overall nominations. Speaking of Roma, that was #3 on my 10 Best list, joined by fellow Best Picture contenders A Star Is Born (#6), Black Panther (#10), and BlacKkKlansman (Honorable Mentions list). As expected, the Academy continued the awards season category fraud by placing The Favourite’s Olivia Colman in Best Actress and co-leads Rachel Weisz and Emma Stone in Best Supporting Actress, but I suppose that was the only way all three could have been honored for their excellent turns.

* Black Panther for Best Picture. The absence of The Dark Knight from the 2008 Best Picture race was so blatant — and so controversial — that, moving forward, the Academy immediately opened up the number of nominees from the normal five to up to 10 to accommodate the likelihood of more popular favorites being nominated. Of course, that has led to dubious Best Picture nods for some less-than-stellar blockbusters (e.g. The Blind Side, this year’s Bohemian Rhapsody), but on the plus side, it has finally allowed a superhero movie to nab a Best Picture slot — an overdue Academy first.

* The Best Animated Feature Lineup. Remember that internal rule change instigated last year, the one that allowed the feeble toon flick The Boss Baby to slip into the Best Animated Feature race? It was expected that this awful turn would continue this year with the desultory likes of The Grinch and Sherlock Gnomes up for Oscars, but happily, that’s not the case. I have yet to see the Japanese anime yarn Mirai (though it’s been thus far receiving positive reviews), but the other four nominees — Incredibles 2, Isle of Dogs, Ralph Breaks the Internet and Spider-Man: Into the Spider-Verse — are all worthy contenders and deserve their bids.

* Sam Elliott for Best Supporting Actor in A Star Is Born. Perhaps my favorite performance in any film this past year came from Elliott, a never-before-nominated veteran who initially seemed like a lock for a nod until he was ignored by the Golden Globes and BAFTA. Thankfully, the Academy came through. When he learned of the news, Elliott amusingly stated, “It’s about fucking time” before turning more humble. He got it right with that first quip.

* No Noms for Youthful Leads. The best leading performances I saw in 2018 both came courtesy of young’uns: 15-year-old Elsie Fisher in Eighth Grade and 21-year-old Lucas Hedges in Boy Erased (he was also excellent in Ben Is Back). Alas, both were overlooked for nominations.

* No Noms for Critical Faves. You wouldn’t know it from the relative lack of publicity, but Ethan Hawke won a head-spinning 28 critics’ awards for his leading role in Paul Schrader’s First Reformed — more impressively, he went 3-for-3 in nabbing them from the biggest of the groups (New York, Los Angeles, and National Society). But longtime Oscar prognosticators knew his sort of performance rarely gets singled out by Oscar, and we were right, as he was denied a nomination. Other critical darlings who failed to make the cut: Hereditary’s Toni Collette, Support the Girls’ Regina Hall, Burning’s Steven Yeun, and Widows’ Elizabeth Debicki.

* Bao for Best Animated Short Film. Pixar shorts routinely get nominated in this category regardless of quality, but Bao might be the worst the company has ever produced. Nevertheless, it garnered a nomination.

* Three Identical Strangers MIA. There were so many stellar nonfiction features produced in 2018 that a few gems were bound to be left out. Worthy efforts like RBG and Free Solo made the cut, but, to the shock of most, the beloved Mr. Rogers doc Won’t You Be My Neighbor? was overlooked. For me, the most disappointing omission in the Best Documentary Feature category was Three Identical Strangers, the only doc this year to land on my 10 Best list.

Other Points of Interest

* Every single critics’ group worth its salt — a whopping 30 in total — gave the 2017 Best Supporting Actor award to Willem Dafoe for his remarkable and low-key performance in The Florida Project. Alas, later-in-the-season outfits like the Broadcast Film Critics, the Golden Globes, the Screen Actors Guild, the Academy, and, shamefully, my own Southeastern Film Critics Association predictably preferred Sam Rockwell’s showboating, look-Ma-I’m-acting! turn as a lovable racist cop in Three Billboards Outside Ebbing, Missouri. Perhaps the Academy felt guilty about its wrong choice, since practically nobody predicted Willem Dafoe to immediately nab another nomination this year, this time as Best Actor for his intense turn as Vincent Van Gogh in At Eternity’s Gate. The performance is certainly worthy, but the film was mostly forgotten throughout the season. Incidentally, besides Dafoe, only one other nominee from last year is up again this time. That would be, yup, Rockwell, repped this time in the Best Supporting Actor category for his amusing if hardly golden turn as George W. Bush in Vice.

* Last year, Mary J. Blige became the first person to ever be nominated in both an acting category and a music category in the same year, earning nods for Best Supporting Actress and Best Original Song (“Mighty River”) for Mudbound. History repeated itself immediately, as Lady Gaga now becomes the second person to pull off the feat, grabbing noms for Best Actress and Best Original Song (“Shallow”) for A Star Is Born.

* Black Panther nabbed an impressive seven nominations, but, rather surprisingly, it failed to snag one for Best Visual Effects. Instead, the superhero genre is repped in that category by Avengers: Infinity War. For the record, the other four nominees are Christopher Robin, First Man, Ready Player One, and Solo: A Star Wars Story.

* Despite writing the scripts for three of Martin Scorsese’s best films — Taxi Driver, Raging Bull and The Last Temptation of Christ — Paul Schrader has never been nominated for an Academy Award … until now. With First Reformed, the writer-director is in the running for Best Original Screenplay.

* Actress Meryl Streep and composer John Williams are Academy favorites, seemingly earning a nomination every time they leave the house. But for 2018, they were both ignored. Streep appeared in small roles in two sequels, Mary Poppins Returns and Mamma Mia! Here We Go Again, but was rightly bypassed for both. As for Williams, he actually didn’t compose an original score or song in 2018. I mean, you would think that would guarantee he wouldn’t be in the running, but after rewarding him with 51 nominations, I’m surprised the Academy didn’t find a way around that.

CRITICS' 10 BEST
Based on a national sampling of 810 critics, these were the films that appeared the most frequently on 10 Best lists.
1. Roma
2. First Reformed
3. The Favourite
4. If Beale Street Could Talk
5. Eighth Grade
6. Black Panther
7. BlacKkKlansman
8. Burning
9. A Star Is Born
10. Hereditary
(Source: www.criticstop10.com)

...AND THE WORST
OK, we now have a sense of which films reigned as the biggest and/or best of 2018. But what about the worst? Glad you asked. Based on cumulative scores at Rotten Tomatoes, 10 Worst lists, and other factors, these were the year's biggest turkeys:
1. Gotti
2. Death of a Nation
3. Slender Man
4. Holmes & Watson
5. The 15:17 to Paris
comment