The Howlin Hound features America’s top sandwiches under one ‘Ruff’

Celebrating one year as an all in one sandwich eatery

SOUTHERNERS may never get over their fascination with fried green tomatoes and shrimp & grits, but as Americans they certainly also obsess over the infamous hand-held delight between bread: the sandwich.

A quick Google search will generate numerous lists of the Best Sandwiches in America. Some of the greatest sandwiches like the Reuben, Cuban, Philly Cheesesteak, Muffuletta, Po’Boy, Gyro and of course, the burger, can each be found at different eateries throughout Savannah. But what if I told you that there is one restaurant whose menu is based entirely off of the Top 20 Sandwiches in America?

The Howlin Hound, on Waters Ave., has been owned and operated by Kirk Blaine since November 1, 2015.

Blaine grew up with hardworking parents who own Barnett Educational Supplies. He developed a strong work ethic through assisting his parents with various tasks around the store. “All I knew is how to work,” Blaine says.

Blaine’s first position was at the Driftaway Café in Sandfly, where he remained until accepted into the Culinary Institute of America. After receiving a Bachelor’s in Hotel Restaurant Administration and Culinary Arts Management, Blaine decided to “come back (to Savannah) and live a more simple lifestyle.”

Following eight years as executive of the Driftaway Café, Blaine became owner and chef of The Restaurant at Cohen’s Retreat.

Once he decided to end this venture, Blaine sought to repackage his business into something more approachable and casual, rather than taking the ultra-fine dining route. He aimed to find a way to take the quality ingredients that he was using at Cohen’s and disseminate them to everyone.

Blaine and his wife came to the realization that “customers gravitate towards familiarity,” so they developed a menu of The Top 20 Greatest Sandwiches, relating to every taste and palate. They purposely labeled classic menu items in laymen’s terms, in order to entice sandwich connoisseurs and traditionalists alike.

Their ultimate goal was to “evoke a home-like feeling” for their guests.

Blaine aims to treat his customers and staff like family. Regulars, some that come five times a week, are known by name and order. Blaine also tries to be as loyal to his staff members as they have been with him, some of which who have been with him through multiple restaurant ventures. 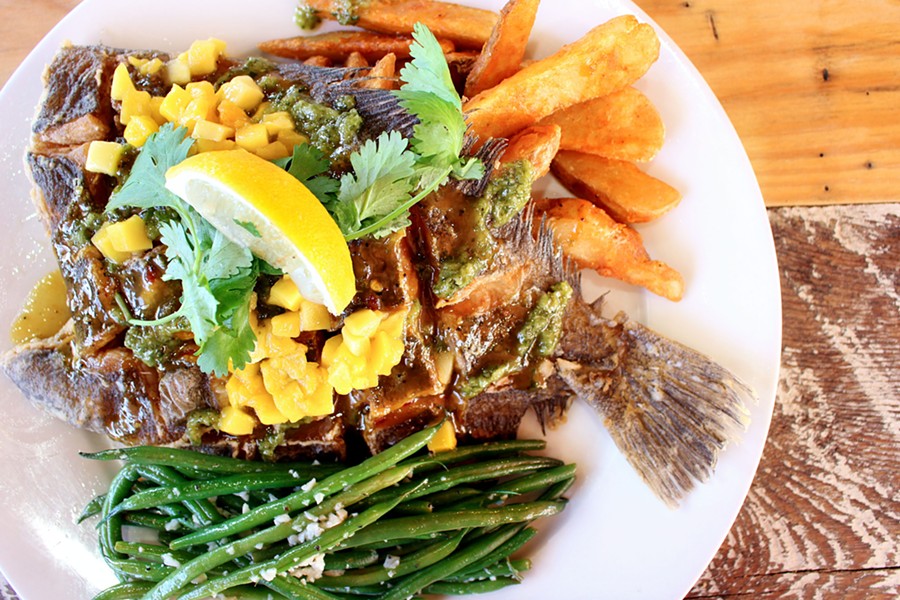 Given that The Howlin Hound occupies a building that was once Burger King, unfamiliar patrons may be initially perplexed by the building’s exterior. Blaine, on the other hand, was not deterred by the previous fast food joint’s façade. He saw a proverbial diamond in the rough. The spacious kitchen, with its deep walk-in cooler and extensive prep space, was ideal for Blaine’s catering business and sourcing partnership with Castaways. “It had everything that Cohen’s did not,” he says.

The interior was converted into an open-concept warehouse style dining area, with vaulted ceilings and exposed wooden beams. Wooden planked walls and tables, accompanied by golden chairs, create an inviting laidback atmosphere. The back wall features a chalkboard of playful sandwich caricatures and the weekly specials.

Next to the walk-up counter there is a half glass wall that allows for an open kitchen, where guests can see their meals being prepared.

What about the old drive-thru, you ask? It’s up and running too. Given that The Howlin Hound’s fare is served from a former fast food chain’s kitchen, it remains every bit as fast.

As self proclaimed “masters of efficiency”, The Howlin Hound staff boast a “7 minute ticket time.”

Blaine saw the restoration of the old drive through as way to reach those on-the-go patrons.

While the food is prepared in record time, that is the only characteristic that it shares with the former tenant. Blaine views quality as his top priority.

Take his ground beef for example. In an effort to “think of a way to do a burger that is better than everyone else’s,” Blaine chose to partner with Bethesda.

One reason this ground beef is so special is that Bethesda does not provide beef to any other restaurant or chef in Savannah. Each year he purchases 7-8 grass-fed cows for his burgers.

Since grass-fed cattle are lean, they would make for tough and chewy steaks.

“But when you grind the entire cow into a burger, you get all the steak cuts, like the New York Strip and Filet, blended together. This gives it a more universal flavor,” Blaine explains, saying the burgers he serves “taste like a steak as a burger.”

Blaine takes his sandwiches, salads and sides as seriously as he would an entrée at a five-star restaurant.

Essentially everything on the menu, from the hamburger buns to the waffle-cut chips, is made from scratch.

Timeless sandwiches are prepared with techniques and components that are not normally associated with a fast causal sandwich shop. With products like Boursin cheese, truffle and Georgia pecan pesto, Blaine seeks to layer simple yet refined flavors into each meal.

We experienced the Short Rib Hash and Eggs from their breakfast menu. It was a play on corned beef hash, but elevated with house brined short rib corned beef served over tater tot hash, topped with over-easy farmhouse eggs and a hollandaise swirl. To make the hash, Blaine fries battered balls of his mother-in-law’s secret potato casserole recipe. The meat was rich and the tater tots were decadently crispy, teeming with an oniony smoked Gouda flavor.

For lunch, we first dug into an all American staple, the Grass-fed Bethesda Burger. This sandwich boasts 100% grass-fed beef, American cheese, bacon and 1000 Island dressing, all on a homemade ciabatta roll. It was served with crispy gaufrette potatoes, which were essentially BBQ seasoned waffle chips that were double fried.

The meat can be described as a perfectly charred patty with a deep beef flavor that only comes from a true respect for the product itself.

It is this respect that creates a burger that stars the actual meat, not the “stuff” you put on it. Yes, you can truly taste the difference. 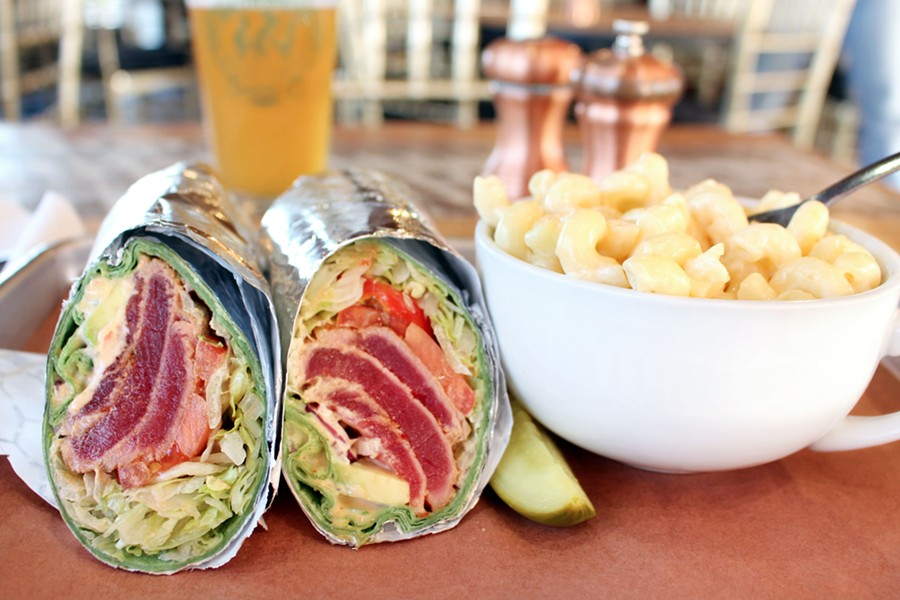 We were then treated to an Ahi Tuna Sashimi Wrap. This showcased an incredibly generous helping of spice crusted Ahi yellow fin tuna, creamy avocado and Blaine’s own fierce firecracker sauce, which was all swaddled tightly in a garlic herb wrap. The tuna, which was seared rare and sliced thin, melted in our mouths.

To make this hand-held delicacy even better, it was accompanied by an indulgent cup of macaroni and cheese. The cavatappi pasta was coated in velvety white American cheese, which made for an ideal bowl of comfort.

As if breakfast and lunch were not enough, we were also introduced to The Howlin Hound’s dinner options. Although some popular sandwiches grace the menu, Chef Blaine also offers seafood, steaks, ribs and chops.

As a Savannah specialty, we opted to taste the Crispy Scored Flounder. The fresh local flounder was diamond scored, flash fried to a golden crisp and draped in two house made sauces.

First, there was a spicy mustard-based Rakies Island sauce that had notes of teriyaki and garlic.

Then there was a raw chimichurri of finely chopped herbs, oil and spices, which brightened the dish. The whole fish was garnished with fresh mango and cilantro, creating a vibrant harmony of island flavors.

This entrée came with thickly cut steak fries and fresh garlic green beans. My husband and I were left wanting to lick the sinfully addictive sauces off the plate after we were finished.

As I drove away from this restaurant, I smiled happily. This is the exact experience that I hope for every time I enter an eatery. I experienced a chef who was passionate about what he did. I experienced a product that was handled with respect, care and expertise.

I experienced a meal that left me delighted, inspired and satisfied. The Howlin Hound experience reminded me of all the reasons why I love to eat.