The Habit of Being

SAVANNAH loves it some Flannery O’Connor, and that love makes itself evident this weekend at Location Gallery.

Southern Discomfort is the biennial exhibition and silent auction of Flannery O’Connor inspired artwork. This year, more than 20 local artists responded to a call for art put out by co-chairs Meredith Gray and Peter Roberts. The one-night-only event is May 18 from 5 to 8 p.m.

“I’m on the board, I’ve been on for two years, and I’m stepping down this year. This is my last hurrah,” says Gray. “So Peter and I are chairing this event jointly. It’s just a perfect marriage.”

“We’ve got a lot of the previous artists from Southern Discomfort, and then we’ve got a whole new slate that have never done it before, which is cool,” Roberts enthuses. “It’ll be an interesting sort of mix.”

“I think we have one of the largest groups that have agreed to participate,” Gray says.

Being artists themselves, Gray and Roberts had at their disposal a long list of artistic friends they wanted to participate in the exhibition.

“For most of the people, I thought they’d be really great, so we asked a few people before we did the invitations,” Roberts says. “You want a really nuanced show. You don’t want too much of the same thing.” 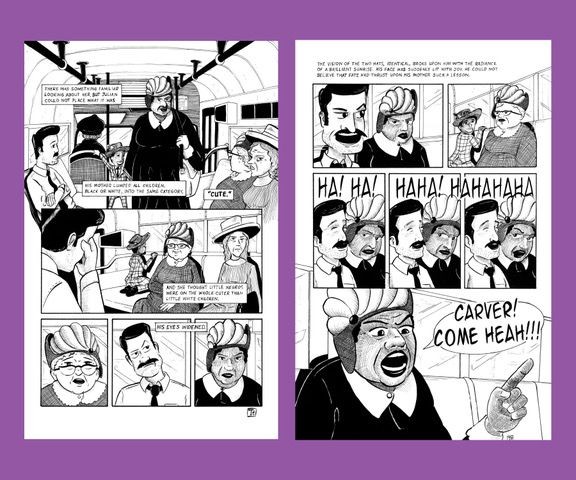 In the invitation letter, Gray and Roberts asked the artists to submit work inspired by one of Flannery’s short stories: "Revelation," "Everything That Rises Must Converge," "A Good Man Is Hard to Find," "The Geranium," and "The Enduring Chill." The list was just a starting point, as artists were free to seek inspiration from other stories, or just from Flannery herself.

With so much artistic freedom to dive into Flannery and her work, the art is impressively varied, from Alexandro Santana’s oil and acrylic painting to Christine Sajecki’s encaustic on birch.

Tim Taylor created a comic strip inspired by “Everything That Rises Must Converge,” which, Roberts and Gray note, fits better than it seems.

“She was a cartoonist—she did a series of cartoons,” Roberts says.

“At a very early age, she had this very artistic streak, not just with writing but with drawing,” Gray shares, “and she did these woodblock panels.”

Since Southern Discomfort is also an auction, the work appeals to an audience with the intent of purchasing, both aesthetically and financially.

“It’s affordable, and for some of it, you would not know it was based on Flannery,” Gray says.

“Some of them are not that specific, or they broadened out,” Roberts adds.

“If you don’t want to hang a picture of Flannery on your wall, you can still come and find something beautiful,” says Gray.

Also of note, the artists participating receive 50% of the winning bid, a fairly rare find in silent auctions.

“We’re giving the artists a significant portion of the proceeds because everyone is tapping out the artist,” Gray says.

“They can take that money and donate it back to the O’Connor Home if they choose, and I think that’s why we got such a good response,” Roberts muses.

“It’s like, is an artist’s time not worthy of compensation?” Gray asks. “Almost every one of us is an artist that has their side stuff too, to support the habit.”