The end of the world with Jane

I remember telling her that any town that can deal with a sassy Jewish woman writer is my kinda place. When I moved here for good a decade ago, it never occurred to me to wonder if Savannah was big enough for the both of us. 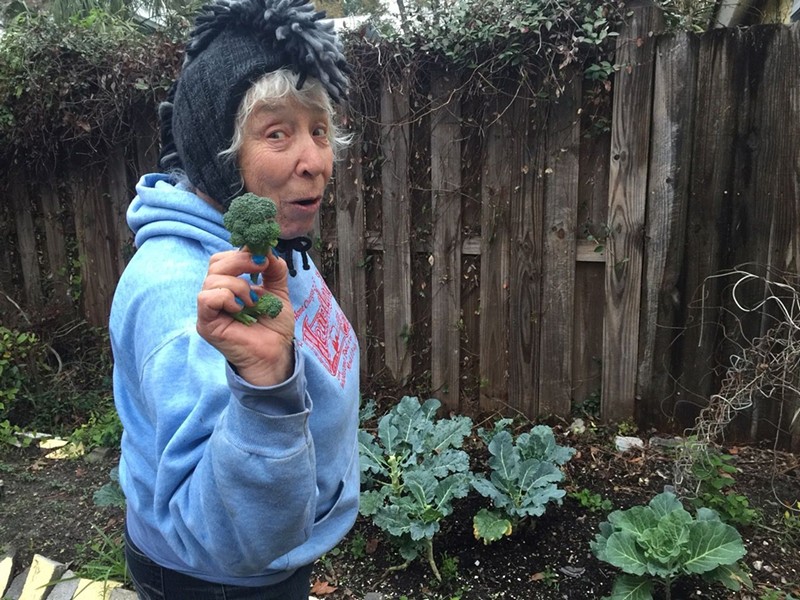 MAYBE IT wasn’t the best idea to go looking for comfort on the darkest day of a very dark year from another misanthrope.

“It’s cold and miserable and I want to throw up,” Jane Fishman informs me when I knock on the front door of her Parkside bungalow.

“Yeah, well, perfect weather for this dumpster fire of a year,” I growl back, brushing the dots of mist clinging to my coat.

We both laugh, because being mildly depressed during winter is such a cliché, as is already the term “dumpster fire” to refer to 2016.

Jane doesn’t do clichés. She prefers—nay, champions—unconventionality both in her writing and her other favorite endeavor, digging in the dirt and planting stuff. The two converge once again in her latest book, I Grew It My Way: How Not to Garden, a hilarious, informative collection of local herbal lore and urban horticultural adventure that heralds appreciation for nature’s overlooked gifts.

I figure I’ve brought the perfect offering, a few Meyer lemons purloined from the ungated backyard of a vacant house on my block. Or not.

“Oy, I’m up to my ears in citrus!” she says as she adds the deep yellow orbs to a basket overflowing with oranges and grapefruits. “The orchard over on 38th Street is going nuts.”

We head towards the kitchen, Pavarotti hollering from the record player.

“Maybe your mood would improve if you didn’t listen to opera in the morning,” I suggest, taking in the dining room table full of partially-wrapped holiday presents and indigo seeds ready to be sorted.

She shrugs and squeezes me a glass of orange juice from her grandmother’s ancient steel countertop contraption, a pulpy shot of straight-up sunshine.

“There, that’s better, isn’t it?” she says after we toast, the twinkle that’s been temporarily robbed by the dreary weather returning to her eyes.

I saw that same sparkle the first time I visited Savannah—exactly 20 years ago this week, come to think it—when the dear lady who would become my mother-in-law (God rest her sweet soul) dragged me over to meet Jane at the synagogue social hall. My future MIL thought it remarkable that she knew two newspaper columnists (back then I was a cub scout at Northern California’s Pacific Sun, one of the country’s oldest altweeklies) and seemed a little star struck by Jane, who shook my hand, bemused.

I remember telling her that any town that can deal with a sassy Jewish woman writer is my kinda place. (When I tell Jane this story, she giggles. “What the hell was I doing at Mickve Israel anyway?”)

When I moved here for good a decade ago, it never occurred to me to wonder if Savannah was big enough for the both of us. Instead, I read her books and columns religiously (“oh my god, stop it with the religion already,” she groans, rolling her eyes) and basically followed her around (not easy, since she likes to hide out in three different gardens around the city and sometimes on Ossabaw Island.) I still haven’t figured out how to grow a banana but I did pick up a mysterious, three-pronged jumping lily at one of her bi-yearly plant swaps.

Jane rides her bike everywhere and wears blue nail polish to cover the crud under her nails. She spends her Social Security checks on local art and healed her own broken kneecap with a paste made from a comfrey plant growing in her driveway. She once got arrested for keying a street sweeper and had to do 40 hours of community service pulling weeds at the Bamboo Farm.

She is the eccentric, DGAF auntie my children always needed and probably the closest thing to a mentor I’ll ever have.

“Oh pssssht.” Jane waves off my sentimental drivel and hands me a cup of sorrel tea made from the deep red petals collected from the sprawling bush on the city-owned side of the back fence.

We sip the hibiscus-flavored brew and talk shop instead. We’re both best motivated by deadlines and agree wholeheartedly with Dorothy Parker, that grouchy scribe supreme who put it best: “I hate writing, I love having written.”

Jane must love the past pluperfect tense a lot, because she’s already working on two more books, Something about 70, which promises to be a most unconventional treatise on aging, and an homage to her late mother, When Did You Get So Jewish?

“My mother always thought it was hilarious when I started putting Yiddish in my columns,” she recalls. “Who knew people would think being Jewish was so funny?”

We get all subdued again as we consider that might not be the case in the coming alt-right assault on the media and beyond.

We visit for a few minutes with her menopausal girls, only giving up a single egg every other morning between them these days. Then we head out the back gate to the lane, where Jane has fashioned an amazing garden in the strip of earth between the wooden fence and the garbage truck route.

Frilly skirts of kale, proud crowns of broccoli, sweeping fans of collards are lined up in surprising order (in her book, Jane loves to brag about how disorganized she is) next to turmeric shoots and garlic toes pushing up green stalks. This incredible winter bounty is fed by compost heaps of broken egg shells and carrot ends moldering into magic a few yards down, waiting to be shoveled and spread directly onto the ground.

“I hate raised beds. They remind me of coffins,” she grumbles, pulling a stray weed in an area marked off by a Barbie leg.

That sets off my misery again, flooded with frustration about Savannah’s pernicious problems and the heartbreak of Aleppo and watching Clown Voldemort and his Sinister Council of Ignoramus Deatheaters usher in the end of the world.

“Oh, Jane, what are we going to do?” I cry, feeling the cloak of darkness hovering above in the slate-colored clouds.

She hands me a comfrey leaf. “We wait until spring.”

This is the solace I’ve come for, I realize as she continues to poke her blue nails around the plants, humming with contentment.

This is what I need to hear from the wisest person I know on the darkest day of a very dark year: That nature always comes through no matter what, and the days only get longer and brighter from here.

Wishing a blessed and bountiful 2017 to all.