Ukranian quartet returns with an original score of Dovzhenko’s Earth 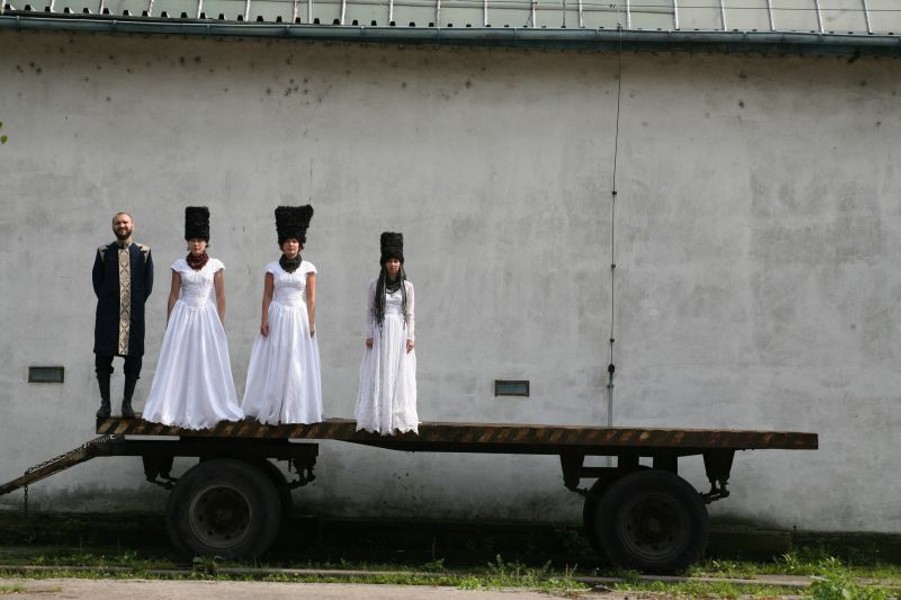 You just never know what you’re going to see in Savannah Music Festival’s eclectic lineups. The festival acts as a sort of global tour, honoring great musical traditions while nesting eclectic fusions of classic sounds in the program. Perhaps one of the annual musical celebration’s finest hours occurred on the 2015 festival’s closing night with DakhaBrakha.

The Ukranian folk quartet offers an entrancing performance that’s unlike most anything Savannahians have seen. Shout-singing, bird calls, and thunderous drumming create a tiny thunderstorm onstage that inspires crowds to get on their feet, dance, and shout along.

DakhaBrakha was originally a project of the DAKh Center for Contemporary Art in Kiev, Ukraine, meant to be a live theater music crew.

Created by the avant-garde theatre director Vladyslav Troitskyi, the quartet is easily recognizable for its members’ tall, black woolen hats and the traditional white wedding dresses worn by the ensemble’s three women.

Though their sound is rooted in Ukrainian folk music, DakhaBrakha is a rhythmic journey around the world. Its members perform on traditional Indian, Arabic, African, Russian, and Australian instruments. Marko Halanevych performs on the goblet drum (a single-head drum with a goblet-shaped body, commonly used in the Middle East, North Africa, South Asia, and Eastern Europe), the tabla (a South Asian percussion instrument similar to bongos), didgeridoo (a wind instrument created by Indigenous Australians), harmonica, accordion, and cajón (a box-shaped percussion instrument).

Olena Tsybulska plays percussion and sings, while Nina Harenetska sings and plays cello and Iryna Kovalenko plays the djembe (a rope-tuned, skin-covered goblet drum), flute, piano, ukulele, and buhay (a Ukrainian friction drum that typically requires two performers to operate it, usually with one person holding the drum and the other pulling a tuft of horsehair that runs through the instrument using moistened fingers).

The culmination of all those sounds, resulting in what the band calls “ethno-chaos,” can sometimes resemble experimental drone music, traditional folk, and, in other moments, raw punk rock.

Their 2015 Tiny Desk Concert for NPR’s All Songs Considered remains one of show producer Bob Boilen’s favorites to date.

The name DakhaBrakha means “give/take” in the old Ukrainian language and is the perfect moniker for the band. In their songs, voices merge in unison, rise above one another, and call and respond.

DakhaBrakha released their first album in four years, The Road, in 2016.

“This album was created at the very difficult time for our Motherland,” the group explained upon the record’s release. “We want to dedicate it to those who gave their lives for our freedom, who continue stand over its guard, and who go the challenging way of a free person without losing hope.”

Their 2015 Savannah Music Festival concert had the whole town talking, and 2017’s performance is sure to be an unforgettable multimedia experience. DakhaBrakha has created an entirely original soundtrack to the classic 1930 film Earth by Aleksandr Dovzhenko and will perform it at the festival.

Considered to be one of the most important films of the Soviet era and one of the best films in the history of world cinema, the film is a love letter to the countryside and the people who live and work there. Earth was banned only nine days after its original release and garnered favor after Dovzhenko’s death in 1956.

“Making music for Alexander Dovzhenko’s Earth was a great honor for us and a difficult creative challenge,” the band shared in a statement. “Frame by frame, this Ukrainian masterpiece of world cinema impressed us every time we worked on it. No matter how we tried to work on the film as a self-contained artistic endeavor, avoiding ideological evaluation, we could not. Of course, we voiced the film in the human terms of the 21st Century, even while being aware that after 1930, when the work was completed on Earth, came the years of the Communist famine of 1932-1933, the years of repression, and we know about the difficult fate of the Dovzhenko socialist empire. Together, we tried to convey the authenticity, and also the naivety, of those feelings and messages brought to us from that time and that era, to us today and our Earth.”

With the release of their sixth studio album and unique projects like the scoring of Earth, DakhaBrakha continue to gain a loyal following around the world. When ethno-chaos takes over the stage at Savannah Music Festival, it’s a beautiful and rare thing.

Lucas Theatre for the Arts