The art of living

HOSPICE SAVANNAH celebrates 40 years this year, a momentous occasion for an organization that is one of the biggest supporters of local art.

The hospice center on Eisenhower’s art gallery has played host to a variety of exhibitions through the years.

When Location Gallery opened three years ago, its director Peter Roberts put out an online survey to determine the benefactor for the first show’s gallery profits. Hospice Savannah won.

“We’ve always had a really nice relationship with them,” says Beth Logan, Director of Marketing and Volunteer Services for Hospice Savannah. “He’s just so generous and he’s so giving.”

This year, Roberts and Location Gallery were able to repay the favor by helping Logan plan Hospice’s The Art of Living party.

The party takes place May 23 at Cha Bella and includes food, music, and an art auction with art by 40 local artists.

“We wanted to do something around the art of living because the theme of our 40th year is ‘The Art of Living,’” says Logan. “We’re looking for a younger, sexier vibe. I want it to be a joyful thing. Hospice is not all death and dying. It’s something to celebrate that we are community-based and give so much away.”

The art represents a broad swath of Savannah artists, from Betsy Cain and Bellamy Murphy to Troy Wandzel and A.J .Perez and everyone in between. Each artist has one piece in the auction.

“Most of the artists are who you would think of,” says Logan. “There’s jewelers, there’s painters, there’s sculptors.”

By hosting a variety of artists and retaining a youthful vibe, Logan hopes to make the concept of palliative and hospice care more accessible to talk about.

“We want people to understand that if they’d access palliative care earlier and hospice eventually, they could have such great support for years and years instead of waiting until last minute. It’s just such a misunderstood product line.” 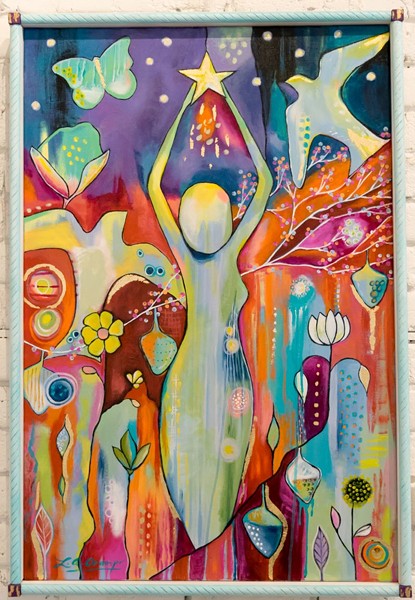 For Hospice Savannah to make it 40 years is a major milestone.

“That’s kind of prestigious,” admits Logan. “There’s a whole lot of hospices in this town—like 15 or 16—but we’re the original one and we’re the only nonprofit one.”

In addition to being an art auction, the party is also one of Hospice Savannah’s Summer Nights parties, a tradition that Logan says began years ago.

“We came up with this concept to encourage people to have parties for us,” Logan explains. “It’s Savannah—you’re going to have a party anyway! It could be as casual as having brunch at your house, having a spaghetti dinner, having a picnic in the park—whatever.”

At Summer Nights parties, attendees are given a donation envelope, but a donation isn’t mandatory. It’s a low-pressure way of raising money for a good cause.

The Art of Living Summer Nights Party and Art Auction

For more information and to buy tickets, visit artauction.eventbrite.com.