Everyone loves The Golden Girls, right? The iconic 80s sitcom, starring the late Bea Arthur, Rue McClanahan, and Estelle Getty, and of course the immortal and mega-beloved Betty White, was a massive hit with an even more massive legacy.

It’s a show that has woven its stars into the fabric of American television history. The Golden Girls has a continued life in reruns that most shows will never experience.

Just when there seemingly wasn’t anything new left to add to the immeasurable Golden Girls legacy, along came the Kansas City Late Night Theatre to do just that.

The theater group has been staging Golden Girls Gone Wild, a live parody starring four men in drag as the show’s legendary characters, for several years throughout the country. 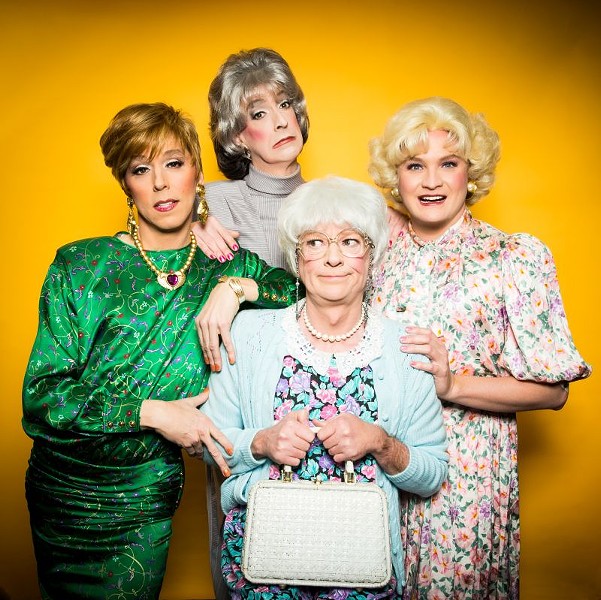 This year, they’re bringing their unique tribute to the classic sitcom to the Tybee Post Theater, opening on July 19 and running for two weekends.

Ahead of the show, we talked to the group’s Ron Megee—who plays Bea Arthur’s Dorothy in the show—about the genesis of the idea and what audiences can expect.

How did the idea for this show come about?

Megee: Our theater has been around since 1997 in Kansas City, and we do parodies and camped shows. Five years ago, we decided that we wanted to explore Golden Girls, because we're getting older as actors [laughs]. This is our third incarnation of the show—this one is the new one. We do different episodes every two years.

What does the process of deciding what episodes to take on look like?

Megee: It depends on what makes me laugh, really. Sometimes, people give us suggestions. I looked it up in the Google world, and the ones we picked for this show are in the top 10 Golden Girls episodes of all time.

Tell me about the episodes you'll be tackling at the Tybee Post Theater.

Megee: It's kind of a mashup! The story is that the four girls are having flashback moments, and they flashback to different iconic scenes. We parody them and camp it up.

They’re mixed up like that because the girls keep having flashbacks while eating cheesecake.

In true Golden Girls fashion! I’m curious, was this a show that everyone in the group was a fan of?

Megee: Yes! I loved Golden Girls. I watched it the first time around. I find myself still watching it. It's like, "Oh, Golden Girls is on. I guess I'll just watch it!" And soon I've watched the entire episode.

It's definitely one of those endlessly funny, classic American comedies.

Do you have a favorite episode? Is there one you haven't done yet that you'd like to in the future?

Megee: I'd love to do the one where Blanche has to give her kidney to her sister. That, I think, is a very funny episode. And I also like when Stan is dating the younger woman. I'd love to do more Stan stuff. We have Stan very little in this show. But we are doing the one where they go to a nudist colony!

How much of this show is verbatim? I'd imagine that you're taking some creative liberties given that it's a parody.

Megee: Oh yeah, it's got creative liberties. With parodying or doing camp, you push different areas. First off, we're four men dressed as women. So there's the drag element. And in my scrunchy boots, I'm 6'5"—that right there is funny. And we're bringing over sixty costumes. We do a lot of their 80s costumes. And in between them we throw in some musical numbers, because we think it's funny to watch Bea Arthur sing.

So it really is sort of a reimagining of these scenes?

Megee: Yes! But Golden Girls fans will go away happy.