Tea (and taste) for two

Dept. 7 East shares space with The Tea Room on Broughton 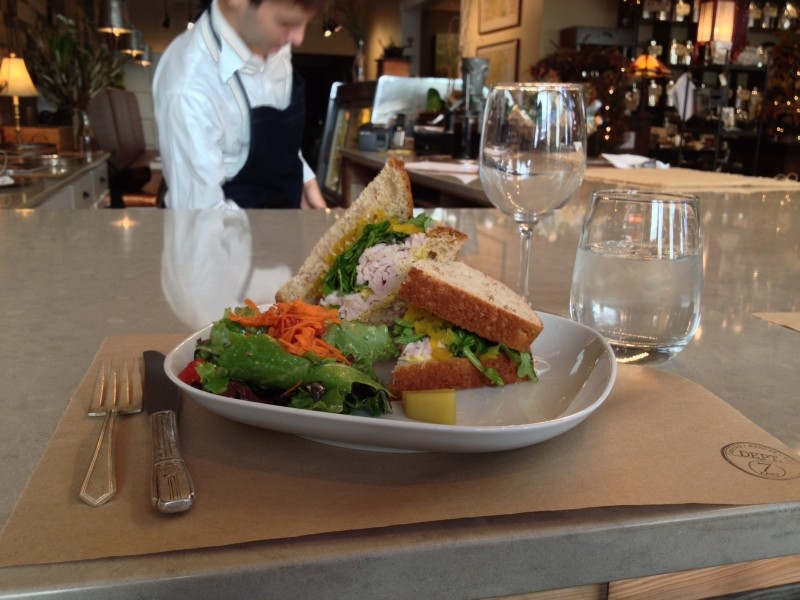 There's something brewing in 7 East Broughton Street ... and it's not coming from The Tea Room.

Well, not exactly. When walking into 7 East Broughton, you'll now notice that the Tea is on the right side of the room while the Party is hosted by the business on the left — but no worries, there are no polarizing partisanships in this space.

Dept. 7 East bistro moved in with The Tea Room earlier this fall. "It takes people a second to get used to that," says owner Meta Adler.

"We're two separate businesses but we work totally together. If anyone wants their tea, we'll serve it in the restaurant," she added.

Sitting at the bar at Dept. 7 East may seem odd because of its close proximity to shoppers perusing exotic herbs in The Tea Room, but the space is only complimented with the presence of the new restaurant. It's not overcrowded, just cozy. The two businesses have adapted to their roommate situation wonderfully — it's tea for two, after all.

The bistro's side of the space is paneled with fresh cut wood and mason jar lights are strung above the restaurant's bar and lights above their booth seating are repurposed metal buckets. The quaint dining room establishes the warm and inviting environment with a fireplace, large paintings and a tasteful touch of taxidermy.

"It was the day before we were getting ready to open and I remember getting emotional, and I never get emotional," shares Adler. "So I was like, 'what the hell is going on?' but it was just really neat to see the design and the menu and how it really came together and compliment each other."

But, the interior isn't the only well designed aspect of the new bistro. Attention to detail is brought to the design of their menu as well.

Co-owner and Executive Chef Michele Jemison shared that her and Adler's creative process for the menu started with inspiration boards showing a compilation of ingredients that reminded them of certain seasons, starting with fall.

"So, we did ingredients that we wanted associated with Fall, and then from the ingredients we took the ones that we liked and built our menu from that," mentions Adler.

Cane syrup was one of the most inspiring ingredients for this season's menu at Dept. 7 East. Adler shared that while she was growing up, her family would spread cane syrup over biscuits and other fall comfort foods, so now the smell always reminds her of the season.

This particular ingredient is used in the restaurant's cane syrup vinaigrette house dressing, a sophisticated and sweet addition to the salad that sides with a turkey commander to make a lunch that demands attention.

But to get an idea of how at ease the environment at Dept. 7 East bistro is, try the "Perverted Roast Beef," or go after "A Teasy Chicken," but you can also '"Vegemite This!" off of the sandwich menu. Or, you can take it slow with a cheese plate and some wine.

Another seasonal sensation from Dept. 7 East is the mulled wine. This special consists of a brew of red (or white) wine with warm apple cider, cinnamon, orange zest, mace, and other spices — a concoction that could be considered East Broughton medicine. It was even presented in an oriental-style teacup.

While the menu has been carefully crafted, this dept. is constantly under development. And Jemison (whose previous culinary living arrangements were at the Red Door on Wilmington Island and Swank Bistro on Skidaway Island) finds the constant change in menu to be an advantage for the new business.

"There are so many things that are exciting about it because it keeps morphing into something else. Like, we want to open for dinner in January. So, for dinner we want to do light bites and beer and wine. The two of us are going to get together again and do our little inspiration boards," explains Jemison. "For me that's thrilling, I love constantly creating."

The freshly produced cuisine is inspired by the spirit of the season and its harvest. They even offer on-site catering for any event, or reason, to hold a cup of tea or toast with a glass of wine. The separate businesses of retail and restaurant get together to produce an environment that promotes R&R.

Dept. 7 East's business model may seem complicated, but the outcome has presented something simply sophisticated. It can tickle your tea fancy but remains humble and comfortable — raise your pinky if you please.