Tangled up in a view

This place matters…but can it be saved?

IN HIS column last week, Connect editor-in-chief Jim Morekis highlighted the irony of the National Trust for Historic Preservation coming to Savannah just as many locals are practically coming to fisticuffs over downtown's development free-for-all.

Other than opining that it seems totally bananas to put a huge arena a mile away from the major hotel sector...and a ballpark on sinking landfill...and a bunch of chain stores on a storied commercial strip, I try to stay out of the fray. Besides, there’s already been enough blood shed on Facebook about this stuff to float a post-Panamax ship.

But I found myself literally tangled up in the conversation when the Savannah Yarnbomb Squad hit the Hutchinson Island ferry landing as part of the National Trust’s Past Forward conference and its ongoing #ThisPlaceMatters social media campaign.

Held across the river at the still new and very shiny Savannah International Trade Center (not so much an ironic as a pragmatic choice of venue), the convention brought together over 2,000 preservationists, architects, urban planners, scholars and anyone else in the business of “saving places.”

(Lord knows, our places need saviors. If not for the Historic Savannah Foundation and the efforts of SCAD, our downtown might have been razed long ago for one massive Family Dollar circle of hell.)

Longtime National Trust member Carolyn Bennett of the Foundation for Historical Louisiana knows keeping the past relevant can be a challenge, and she wanted to kick up the dust this year for her fellow guardians of yore with the seditious riot of color known as a yarnbomb. A knitter herself, she enlisted Preservation Pennsylvania executive director and fiber cohort Mindy Crawford in an endeavor they call Knit, Purl, Preserve.

“Knitting creates keepsakes that are kept in families and passed down—the old sweater reminds a newer generation of a grandmother and prompts storytelling of past times,” explains Carolyn, threading the seam between purling and preservation. “That’s what treasured old buildings do.”

Carolyn and Mindy put out the call for local hook-and-needle nerds for help, and the intrepid SYS kninjas answered: Every time the National Trust colleagues crossed the river or walked from the lobby of the Westin, they were met with a shimmering kaleidoscope of string.

Yarn of every color and texture covered the landing railing and a couple of benches. A splashy mandala emblazoned on a reclaimed Goodwill sweater stretched across two pillars, the National Trust maxim “This Place Matters” embroidered on one side.

The fiber pirates even festooned a garbage can along the river walk, eliciting the giggly observation that that it resembled R2D2 wearing a beanie. 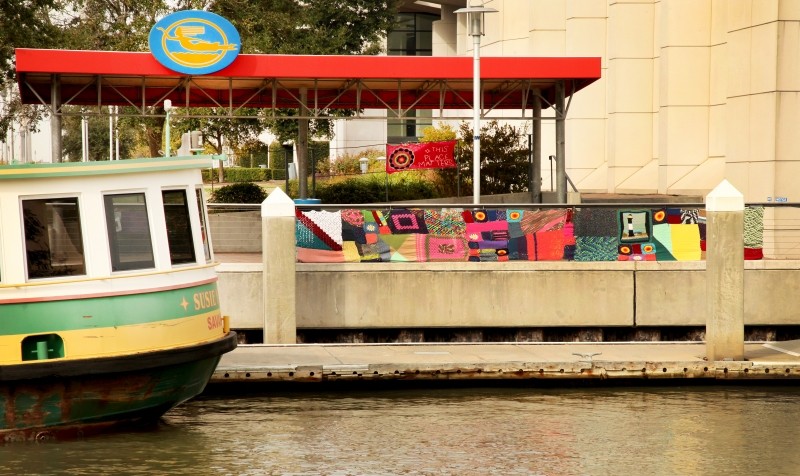 Points on the Savannah side of the river were targeted, too. Jennifer Schofield and her crew at the Frayed Knot gave the statue Waving Girl Florence Martus a lovely skirt and matching scarf, and a group of SCAD students took on Reynolds Square.

“It makes the viewer stop for a minute and get into color, design, zaniness and a bit of fun.”

Lady, you don’t need to tell me! I’m all about colorful zany art popping up in unexpected places. (Hey, have y’all seen the new mural at 40th Street and Drayton yet?)

In fact, I was so dizzy with delight with this National Trust project that it rendered me a little stupid.

When I drove down River Street the first morning of the conference to find that the Waving Girl’s accoutrements had been removed by the City before the sun even hit the squares, I was actually shocked. I scratched my head for a full ten minutes, wondering what happened.

What a knitwit. I’ve only written about eleventy billion stories about the City’s public art policy. I am fully apprised on the role of the MPC’s Site and Monument Commission. I of all people should have known better to think an unsanctioned art installation on public property would be tolerated, even if it were commissioned by the Messiah.

Yet it took me until after the fact to realize that there was no way this enterprise would have ever possibly been issued a per-knit—er, permit. (Thanks for the pun, Matthew McCully.)

Hoping to rescue the materials from the landfill, I tracked down the big ball of yarn at Park and Tree, the department in charge of keeping Savannah’s sacred monuments free of extraneous accessories.

“If the Waving Girl was meant to be wearing a sweater, she would have been created with one,” rebuked Park and Tree director Jerry Flemming, adding that drunk tourists are always trying to put beads on General Oglethorpe during St. Patrick’s Day.

(Flemming will be leaving next month for a city manager position in Texas and is quoted in an article about trees on page 12.)

Fortunately, the ferry landing is under the jurisdiction of the state maritime authority, so that yarnbomb stayed snug for the duration of the conference.

But the incident illuminated Savannah’s paradoxical relationship with the sacred and profane: When it comes to temporary public art like a mural or a crocheted hat for a trashcan, there is a doctrine of protocol that borders on the religious.

Yet when it comes to longview commercial development that inexorably alters the skyline, the holy zoning codes suddenly become more elastic than the waistband of Mama June’s sweatpants.

The juxtaposition was contained in the view: During the National Trust conference, you could look through the colored fabric towards the eastern end of River Street, where the gold dome of City Hall glimmered, its sister statues of “Art” and “Commerce” presiding over Bay Street from the 110-year-old front façade.

But one small turn towards the west, the sharp-edged pumpernickel cube of the Marriott rose from the bluff, indicative of an architectural period I call “Bourgeois Modern.”

You wouldn’t have been able see the Waving Girl’s friendly greeting, since Morrell Park was blocked by someone’s colossal black yacht. Can’t say for sure that it belonged to a certain notorious developer—who knows? Maybe Batman was in town.

But I swear, when it comes to saving Savannah from itself, it sure seems like we’ve got our priorities all tied up in knots.