Take the plunge into Martin Parr's ‘Life’s a Beach’

The water’s fine at this Jepson photo exhibit 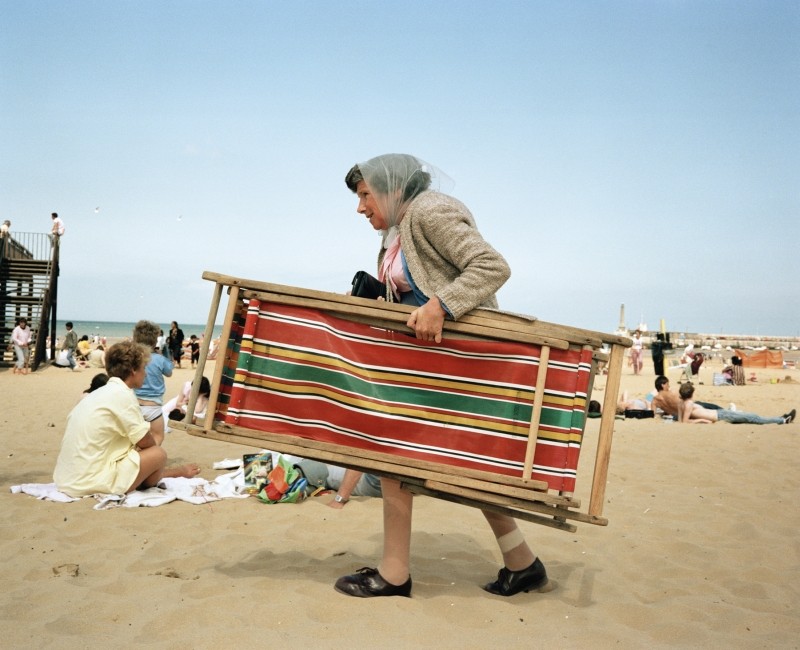 THE GAZE of Telfair Museums' Curator of Fine Arts and Exhibitions, Courtney McNeil, falls across the gallery to a Martin Parr photograph. A group of 60 to 70-somethings donning bathing caps wade into the sea forming two semi-distinct lines.

A hazy pier jutting out in the distance compliments their formation. It is a simple image with gravity, humility and the perfect touch of humor.

“If you were standing 100 yards away and saw that happening, this is not any monumental occurrence. There’s nothing that would jump out at the average viewer as being poetic about this moment, but the way he captures it really just heightens it,” she appreciates.

While the British photographer is known for his sharp social commentary in “Life’s a Beach,” opening this Friday at the Jepson Center, Parr shows his true talent to be observation, not sarcasm.

“More a humorous edge,” is how McNeil describes the spirit. “Life’s a Beach” is a romp through beaches across the globe, revealing resonant idiosyncrasies of beach culture.

The original exhibition coincided with the Aperture Foundation’s book release of “Life’s a Beach”. Now the exhibition is on an extensive international tour. (Copies of the limited edition book will be available for purchase in the museum gift shop.)

The book mimics the classic family photo album but integrates sophisticated details mom would never have thought of. The installation carries this same feel. The images hang unframed, affixed to the wall by sleek magnets and are casually arranged salon style.

“It’s deliberately a little off kilter,” McNeil says of the light-hearted style.

While the images span three decades, McNeil notes, “You would be hard-pressed to observe time passing in these images. It’s much more surprising to me to look at the dates for the works and say, ‘Oh that was 2007? That could have been 1987.’”

Timelessness and pervasive seaside sights from skin-baring suits and sunburns to flippers and sand largely obscure geographic location. As Parr visits the UK, continental Europe, the Americas and Asia, “people let their guard down,” says McNeil.

Pointing towards an image, she remarks, “Those people in the lounge chairs, that could be Hilton Head or Tybee. Then looking at others, they are much more geographically specific. Like these three in the corner are all England and you can see they have this tough, rocky coastline.”

For the opening reception, Telfair is pairing this globetrotting exhibition with their reoccurring Art on Tap event and a special fashion show from global citizen, local jewelry designer and boutique owner, Zia Sachedina.

Sachedina brings his multi-cultural background into his exotic statement jewelry. Splitting his childhood between Kenya and the U.S., he has a Japanese-American mother and an East Indian father.

The collection he is showcasing began as four distinct cultural expressions but the regional turned universal.

“I started seeing a common thread throughout them. It’s more just a cohesive globally inspired collection. It’s hard to pinpoint in each specific piece which country or region had influence,” Sachedina says.

This fashion show is him first solo runway effort and commemorates the 10th anniversary of ZIA, his Broughton Street boutique. Pairing up with stylist Ashley Borders, 40 Volume Salon & Spa and Halo Talent Savannah, Sachedina’s bold and eye-catching Kalahari Collection will shine against the models’ swimwear attire.

The beach ready models will descend the grand staircase in the Jepson Center atrium and “snake their way through the audience,” says Sachedina.

In some ways Sachedina takes similar inspiration to Parr.

“My inspiration truly just comes from my travels around the world and my own cultural heritage. I think that keeps the collections unique and fresh, not completely tied to what’s on trend right now. I want this jewelry to be timeless,” Sachedina says.

But upon entering the gallery to view “Life’s a Beach” audiences will find a contrast between the two visions. 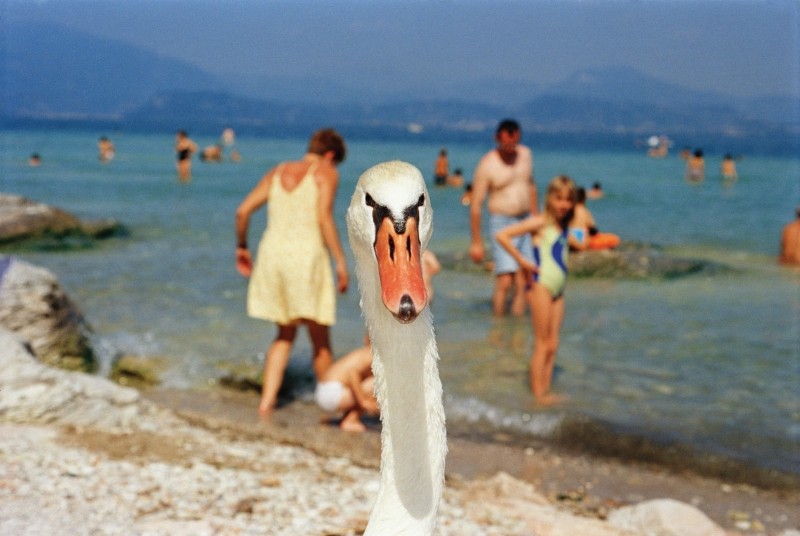 Sachedina brings an element of fantasy in the beautiful swimsuit-clad women. Comparatively, McNeil says “If you think about the way the beach is depicted in popular culture or commercials, you don’t see Martin Parr’s people.”

She notes that Parr “gives equal visual weight and importance to his subject regardless of whether it’s conventionally beautiful or not, whether it’s graceful or awkward.”

Parr is strikingly kind in his depictions. He reveals that “if the wind’s blowing, everybody gets wind blown. And if the sun is out, everybody gets sunburn,” McNeil says.

Class dissolves as Parr finds “the innate humanness in all of us and the sense of humor that bonds us together.”

He doesn’t confront his subjects but, through compassion, challenges the viewer.

“If you look at these images and you sort of rush to the judgments that many of us do at the beach about someone’s appearance or what they’re doing or how they’re acting, it makes you aware of that judgment. He really puts the onus on the viewer to observe with fresh eyes and not to make judgment,” says McNeil. 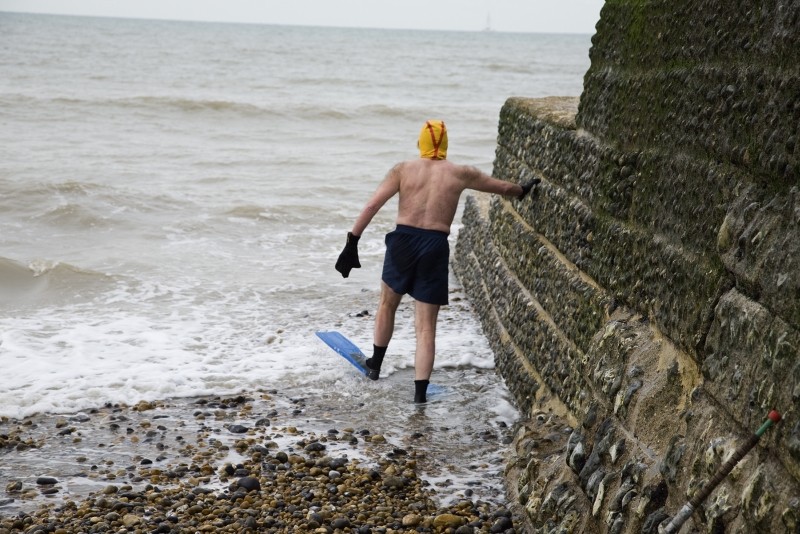 For a tongue in cheek exhibition featuring American flag Speedos, silly sunhats, bug-eyed glasses and even an appearance from a swan, he prompts some soul-searching.

But what Parr truly leaves the viewer with is, when it comes down to it, life is a beach and we should all dive in.

'Life's a Beach' Art On Tap: Zia at the Beach 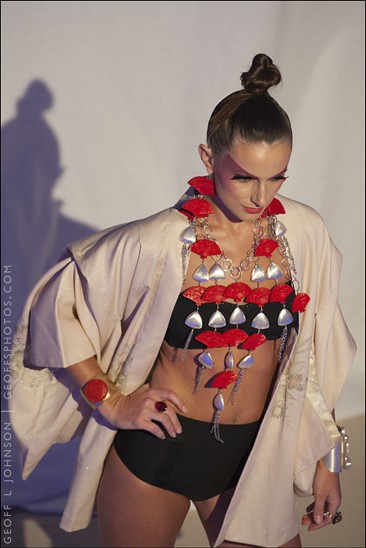 Speaking of Jepson Center For The Arts

In the now with Alicia Eggert at PULSE Art + Technology Festival

Henry Dean: An artist of process