Tacos for a cause

WHEN Peter Roberts returned from Manhattan in mid-March, he came home to a very different Savannah.

Coronavirus threatened to ravage the city, just as it was about to do in New York. Roberts was forced to postpone his upcoming exhibitions at Location Gallery, including Rubi McGrory’s solo show, and quarantine himself for two weeks.

Once his time was up, Roberts came back strong with a big idea: the Moveable Feasts.

In lieu of a physical art exhibition and sale, Moveable Feasts is all online and features the usual suspects from Location’s roster. Typically, the gallery donates its profits to a featured nonprofit, but the sales from this show go towards purchasing Bull Street Taco’s taco boxes that then go to feed frontline health workers. Each piece of art for sale is accompanied by the number of taco boxes it will purchase.

It was the perfect arrangement for Roberts, who wanted to help nurses in a meaningful way.

“My sister-in-law is a nurse, and she said, ‘I know it sounds crazy and really simple, but feed the nurses,’ because they’re not getting the break or the proper nutrition,” says Roberts. “Then I learned that Bull Street Taco was already sort of doing it, and I realized that instead of dispersing our dollars to a local nonprofit this time, we would disperse them to our frontline healthcare workers.”

Bull Street Taco began collecting donations for taco boxes for healthcare workers because owner Johnathan Massey’s wife, Sharon, was a speech pathologist and well-connected in that field. They’ve also partnered with Meals for Medical, a group run by Jennifer Green who coordinates the needs and delivery.

“I decided to go ahead and start taking donations, and with that being the case, if somebody donates $5, they can trace that $5 bill through our restaurant and into the healthcare system to feed the healthcare workers,” says Massey. “That $5 goes to two causes: it helps us keep our staff working, keeps us paying the business, and it feeds the healthcare workers at the same time.”

In that way, Moveable Feasts are a win-win-win-win situation: Bull Street Taco’s employees keep working, Location Gallery’s artists sell some work, healthcare workers get fed, and customers get to buy art that goes towards a good cause.

As of this writing, Bull Street Taco has donated and delivered over 100 taco boxes, and Location Gallery is responsible for 37 of those boxes.

“There’s a lot of good people out there,” says Massey. “Money is tight for everyone right now—every business, every industry. Everyone’s kind of pulling back, so there’s still a lot of generosity going out there.”

This has been a paradigm shift for both Location Gallery and Bull Street Taco, in two different ways.

“It helps Location to just be relevant and to keep some dollars flowing to them,” says Roberts. “We just had to. At that point, they were only allowing 50 people to gather, and we get more than that at an opening.”

“I hated these taco boxes,” laughs Massey. “I couldn’t stand them before the pandemic. I said, ‘These things don’t make us any money, they’re expensive, it’s a custom-made box, we don’t sell enough of them, we don’t make a ton of money on them.’

“I thought we’d just run out what we have and I won’t reorder them, and then the pandemic hit and these things have been our saving grace. They were just kind of made for a pandemic—it’s as easy as ordering pizza.” 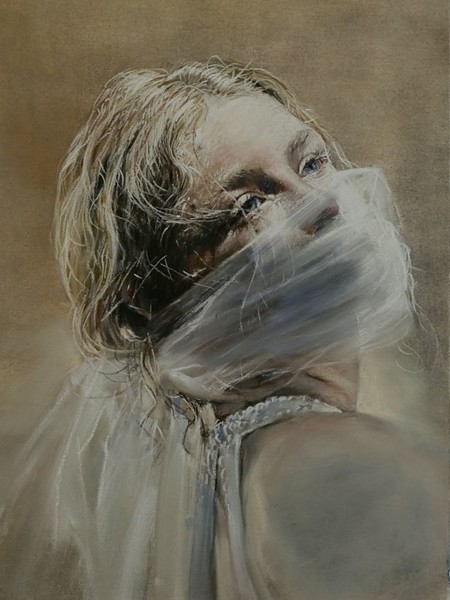 The partnership will last as long as it makes sense to do so. Location’s artists are busy creating new work inspired by the pandemic: June Stratton’s “Breathless” depicts a woman with cloth over her mouth, and Stratton is donating all proceeds from the sale of that piece to buying taco boxes.

Lisa Ocampo also painted “Under Siege,” a depiction of the Statue of Liberty with a mask, especially for the exhibition, and Tate Ellington offered a watercolor painting of Bull Street Taco.

As the pieces fly off the virtual shelves, Location replaces them with new work, ensuring that the project will live on as long as the need is there.

The reaction so far has been popular, even in far-flung places, which reassures Roberts that art is essential, perhaps even more so than ever.

“This is a way to define art and restaurants as essential and figuring out our essentialness,” says Roberts. “I’m getting Instagram messages from people in other cities and they’re like, ‘How cool, can we do this?’ Absolutely. Who doesn’t love art, tacos and nurses?”

For more, visit locationgallery.net, bullstreettaco.com, and Meals for Medical on Facebook.