Simmons left her native London when she was 16 to become a musician, but got stage fright the first time she performed. Her switch to writing about music led her to a 40-year career with gigs at multiple outlets, including the famed CREEM Magazine.

Simmons also wrote “I’m Your Man: The Life of Leonard Cohen” in 2013 to acclaim.

Simmons will talk and perform at the Book Lady on Mar. 30 at 7 p.m. before heading to the Roasting Room in Bluffton, S.C., for a performance with Jim White on Apr. 5. 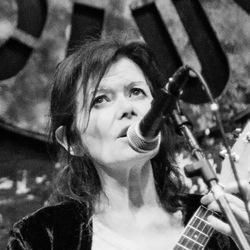 We spoke with Simmons last week about her career.

How’d you start writing about music?

There’s a big cliche that people become music journalists because they’re failed musicians and I’m that cliche [laughs]. When I was younger I was a hippie and writing sad songs on guitar. I went on stage with a band of boys and got such stage fright, I made a sound like a bleep. I cried like you do if you're a girl, so I decided I was going to be a rock journalist.

But, I didn’t realize you needed a penis to be a rock journalist! I managed to bypass a lack of penis and went to L.A. in 1977.

How did you find success being a woman in a male-dominated field?

It was a matter of sheer luck, but where I went to in America when I ran away was to Los Angeles which, at that time, believe it or not, did not have a a big presence with record companies that dealt with musicians. There were not that many journalists there, so I didn’t have that competition had I gone to New York. I had my own little kingdom there.

So I got on with everything and was a correspondent for the British weekly Sounds—that was cool—and I wrote for CREEM Magazine in America and different magazines in Japan and Germany.

Nothing was digital—everything was much looser. I think what happened is it came with the digital revolution in publication in the 80s, where they didn’t have to send these things off to the printers and now that they can design the magazine on the spot, they give you word counts. But back then you had to read them over the phone. It really seems like the 70s is the Stone Age but I remember seeing my first fax column!

You sound like you were so busy back then.

I was looking back in this old black book, and all I’d put in it was the name of the band I’d interviewed and a clue to what magazine and I’d tick off if I got paid. I started it in 1978 because I didn’t believe it was going to last. I thought someone would call my bluff and I’d stop. But I have 40 years of pages and at the very beginning I was doing eight interviews a week. Back then, it was just a wonderful world, kind of a golden age of music writing. One of the first things I was sent out to do was go on the road with Black Sabbath in 1977.

It was pretty awesome, but pretty wild. It’s a very different thing. Back then, there was a strange relationship between journalists and bands. Pre-MTV, there wasn’t many things to break a band other than the music press. There was kind of a wild arrogance amongst the journalists and the bands because in a way, journalists could break a band by putting an unknown band on the cover.

There was camaraderie among the bands and journalists, but also the opposite. Some of the metal bands would be quite physical and the journalists would get punched on the nose if they gave a bad review. I guess they figured none of them would hit a girl!

At times it could be like, “Eh, not that again,” but it was great being part of that boys’ club but in a different way. It was really a wild tour. Free records, free shows, free drinks every time you went to a show.

They used to say writers are all failed musicians, but really they’re huge music lovers. None of my peers were not about music. They basically lived with tables made out of CDs. Geeky guys and geeky girls, every now and then, who just adored music, and I was one of them.

How did you start the Cohen bio?

My agent had been nagging me nonstop about saying yes to a project or coming up with a project, and I just came out with the only person I want to write about is Leonard Cohen. One day we did an interview in London that was three days long and even with that, there was so much more I wanted to know. There were so few books on him and I didn’t like any of the books on him. There wasn’t any kind of thorough thing that gave me some insight into the mystery of this man. So I just proposed to him that I wanted to do it and he said yes. It was a wonderful projects—it’s had twenty translations. It just got the contract today for the Croatian translation.

What does that book’s success mean to you?

It’s amazing, some of the things that have come through. It was such a pleasure to work with him. It’s such a labor of love to write a book of that intensity. It luckily turned out to be a bestseller. It also changed my life in a way because my American publisher didn’t have an interest in sending me out on book tours, so I kind of went out and did it with my ukulele. I knew all his songs, so I went out with the book and sang his songs.

Readings get boring! How many people do you see secretly looking at their phones? But if you’re a Leonard Cohen ukulele playing jukebox, they pay attention.

Tell me about losing your stage fright.

It’s such a fascinating time to live your life inside someone’s head for so many years. I lost my stage fright four decades later and got persuaded to make an album of my own.

Back then, I wrote all these horrible little songs through minor chords and hoped being a cute 16 year old girl would get me away with murder. I really enjoy working in that short format. I love that creativity, and it’s something I guess I’ve just always wanted to do because it doesn’t seem that difficult to me. I love that and I love performing.

I’m doing a proper show with Jim White, who I’m touring with. He’s a fascinating singer-songwriter who’s been around a long time and considered one of the pioneers of Americana music. He was signed by David Byrne from the Talking Heads. Both of us like playing slightly odd reflective melancholy music.

I’ve been very fortunate. It’s interesting to become friends with people I’ve written about over the years and suddenly I find myself on the stage with them since my album [Sylvie] came out in 2014.

Sylvie will talk at the Book Lady Bookstore Mar. 30 at 7 p.m. She appears on GPB for a conversation w/ accompaniment by Velvet Caravan. Her performance at the Roasting Room is April 5.