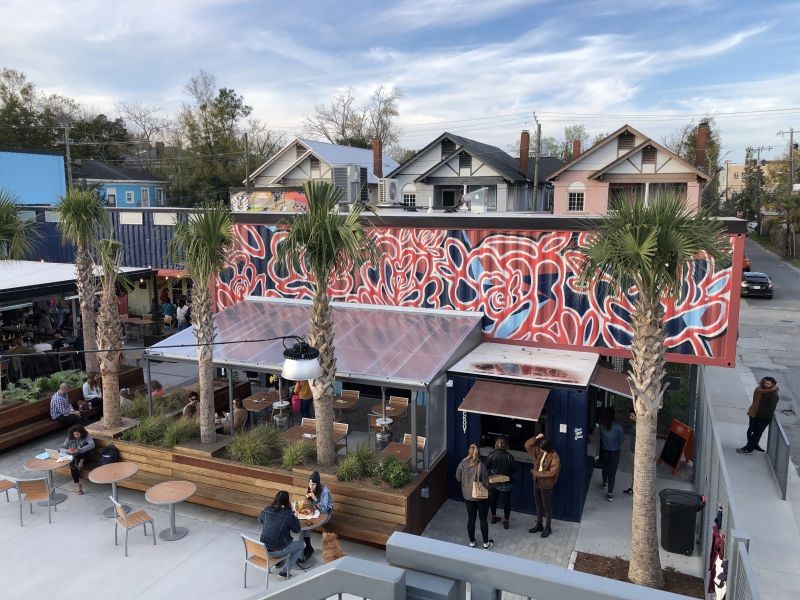 If you’re looking for some St. Paddy’s Day fun outside the sea of green downtown, head to Starland Yard for some low-key fun.

First up, the folks at Creature Comforts host a keg release of their Classic City Lager on Sat., Mar. 14.

“We are one of Creature Comforts’ biggest accounts, so we’ve been talking about different ways they want to do promotional things with us,” says Ava Pandiani, general manager of Starland Yard.

Classic City Lager is one of the more popular beers in Creature Comforts’ lineup. It’s a refreshing American lager with a citrusy flavor.

“It tastes like a really good Coors Light, so people really like it because of that,” says Pandiani.

While Creature Comforts is brewed in Athens, it’s not widely available in Savannah, but Starland Yard offers two options of the beer.

“If you went to school in Athens, this is kind of your spot,” laughs Pandiani.

Creature Comforts returns for another event on Sun., Mar. 22, well after the craziness of the festival weekend.

“Everyone has a St. Patrick’s Day party, but we really were trying to look how to get involved in the community, look how to give back, things like that,” says Pandiani. “We really wanted to do something that would be a service industry appreciation day, and they were totally gung-ho about it.”

On that Sunday, any service industry worker who lives in Chatham County will receive their first beer on the house, courtesy of Creature Comforts.

“The idea is just to say thank you for working such a crazy [weekend],” says Pandiani. “People work the most insane hours that weekend—it’s a lot. They’re dealing with the public on a magnitude that’s hard to even understand, especially if you work downtown.”

Equally as important to the event is the partnership with Giving Kitchen, a group based out of Atlanta that looks to serve those who serve us.

“They were founded on being a charity and a resource specifically for people in the service industry,” says Pandiani, “so the thing they’re mainly known for is a lot of people in the service industry don’t have health insurance. So if you break your foot and you’re a waitress, you can’t work your shifts. You’re not getting hourly, you’re not getting your tips, there’s no backup. They were founded to help alleviate the stress of wages lost specifically from injury and sickness.”

Giving Kitchen was created after well-known Atlanta chef Ryan Hidinger was diagnosed with stage four cancer in 2012. The community’s response to Hidinger’s diagnosis was enough to inspire him and his wife, Jen, to create a support network for service industry workers in need.

At the event, Giving Kitchen will have a table set up with information on their group.

The final event of Starland Yard’s shenanigans is on the big day itself. On St. Patrick’s Day, the Yard will open early for a day of family fun.

“We’re doing a very family centric, family friendly party. The idea is that if people went to the parade, they can come on their way back,” says Pandiani. “We’re going to have a moon bounce and a face painter and things like that. We’re definitely gearing it for Savannah families—they’re not going to go further downtown to eat, so what’s their option if they’re heading towards Pooler? It’s a way easier stop to come this way.”

Take advantage of the Starland Yard’s proximity away from the green wave in the days surrounding the holiday.