Spring has sprung with José Ray

‘Pollen’ exhibition is on display this Thursday at Mansion on Forsyth

Let’s say this first: José Ray is a Gemini.

For those unfamiliar with why that matters, these air signs excel at balance, and Ray is a classic Gemini in that way.

“I’m always thinking about those things and in all aspects of life,” says Ray. “I like the balance aspect of it, especially when I’m working with graphics of nature, balance and process and rhythms in nature, so you see that engrained in the work.”

Balance, indeed, is a major theme in Ray’s life and work. You may know him for a variety of different artistic pursuits: he’s an author, an illustrator, a painter, and a DJ.

Ray’s balance is a little out of whack with his latest exhibition, “Pollen: A Celebration of Spring in Mixed Media,” which opens this Thursday at the Grand Bohemian Gallery at the Mansion on Forsyth Park.

Ray is the newest artist in the gallery’s Savannah Series, and, true to title, gallery director Carmen Aguirre found him in a very Savannah way.

“[Aguirre] is the mother of Kat Dagen, who’s been a friend for a long time,” recalls Ray. “I guess I hadn’t realized that Carmen started following me on Instagram, and then Kat said, ‘Oh, my mom’s really into your work—she’s the gallery director over at the Mansion. I was like, ‘What, really?’”

Sure enough, Aguirre had followed Ray on Instagram and liked a few photos, but instead of sliding into his DMs, she came to one of his shows, “Flora” at Sulfur back in the fall.

“She was impressed by the work and said it popped more in person than it did on Instagram,” shares Ray.

Some of those pieces from “Flora” will be on view for “Pollen,” but Ray has primarily created new work for this exhibition.

“I wanted to make a whole new series, and it’s been a bit of a marathon because there’s so much layering and working back into it with different mediums that I end up spending ... I’d like to time it,” says Ray. “It did all come together quickly.” 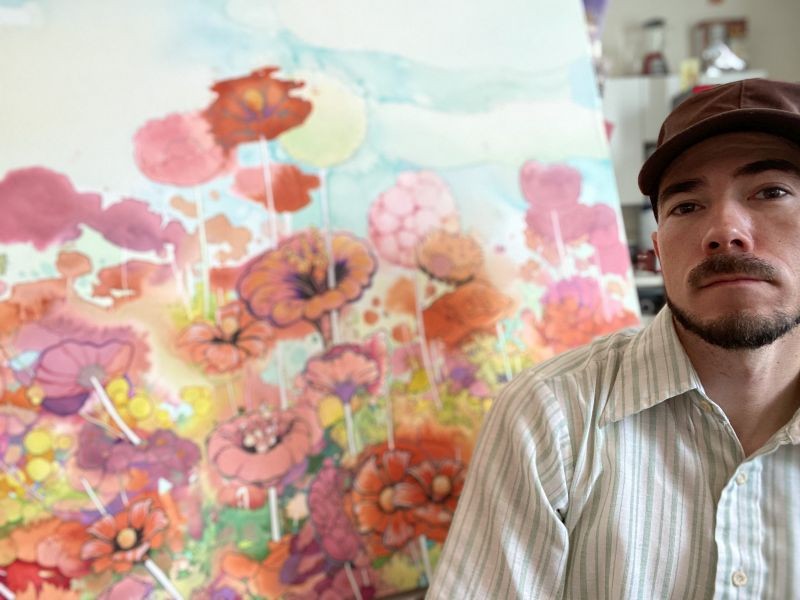 “Pollen” is the perfect springtime show with lots of florals and bright colors. Ray’s process for creating these works is very detailed and involves watercolor, ink, gouache and marker.

“The substrate is a process in itself—I’m building and framing out a panel. I’ve been trying a lot of different papers: mixed media, oil, watercolor,” says Ray. “Once I get that set, the process is just really loose watercolor, like as I’m going, saying, ‘Okay, I’m going to corral it this way or pull a little bit out here.’ What I love about it is, it’s too loose for me if the whole thing was like that, but it’s great for providing atmospheric perspective. Those are flowers in the distance, and the audience is on board for that.”

Ray begins the work with watercolor and adds touches of ink to bring out the inherent balance in the piece.

“You’ll see the detail in these other ones that have ink and colored pencil and marker and gouache,” says Ray. “The ones I render up really in depth, they are also a contrast between all the elements. It becomes an exercise in design, where I’m constantly stepping back and being like, ‘Okay, this is starting to form here,’ and I jump back in to balance it by going into another spot.”

Watercolor does demand a certain patience, which Ray certainly has.

“It’s a lot like looking for shapes in the clouds,” he muses. “People who work with watercolor know you have to let the watercolor do what it wants to do. If you try to control it too much, it’s going to look like trash. You can corral it a little bit, you can whisper to it, but you have to let it do what it does.”

A major part of Ray’s artistic process is the act of stepping back and looking. That’s something he also urges in his students when he gives art lessons.

“I tell my students a lot, ‘You don’t always need to be doing. You need to stop and look and just breathe. Take in what you’re doing and think about how someone else sees it when they see it for the first time,’” says Ray. “It’s hard to take yourself out of, this is my precious artwork, and just step back.”

Ray loves the individuality of each of his pieces.

“I get a lot out of the actual process. It’s also the fact that each piece is different,” says Ray. “When I’m throwing down the watercolor that’s loose and expressive, and then I step back, it’s like, what are the colors saying? What part sticks out? Where do I go in first? Sometimes I go in with ink first, other times I go in with marker first, but every piece requests something different from me about how to work on it, which I really like. It’s another part of not just jumping right on autopilot, but letting the piece tell me what it needs and responding to that, keeping that balance.”

As he gets ready for this show, Ray’s balance is thrown off a bit; he admits to letting emails sit in his inbox until he forces himself to answer them. (Don’t be offended if that’s one of your emails.) For right now, his priority is getting the work for “Pollen” out, since it’s a big opportunity for him to show his work to a different clientele.

In addition to the show at the Mansion, Ray is also involved in the Arts on Waters project, an initiative by the City of Savannah to revitalize the Waters Avenue corridor with local artists.

“We’re trying to get content right now from folks in the neighborhood to make sure the mural fits and means something to the people that live in the area,” says Ray.

Ray may have a full slate of projects, but he’s learned over the years how to make all the moving parts work.

“At my age, you learn that burning yourself out can be a huge detriment,” says Ray. “I’m trying to balance that, just like I’m balancing the pieces.”

Pollen: A Celebration of Spring in Mixed Media

On view through mid-April