Soup it up for Loop It Up: Connecting the dots

IT’S IMPOSSIBLE to fully encapsule the legacy of Howard Morrison as he touched so many lives in Savannah. His philanthropy and community involvement is unsurpassed.

Loop It Up is an example of his enduring gift to Savannah.  A community art program, Loop It Up began in 2008 by serving 10 students.

Now the organization serves 5,000 children a year with over fifteen programs weekly at different locations in Savannah’s urban neighborhoods.

After attending the Craft Yarn Council of America meeting, Howard Morrison came back excited about a program called “Warm Up America,” which is a senior and youth outreach program where experienced knitters and crocheters teach young people how to knit—an initiative to engage children and teens in community service work.

Morrison was on the Board at the West Broad Street YMCA and wanted to pilot the program there. While looking for good community partners, he contacted the SCAD fibers department.

Cue the spotlight—that’s where Molly Lieberman enters the picture. 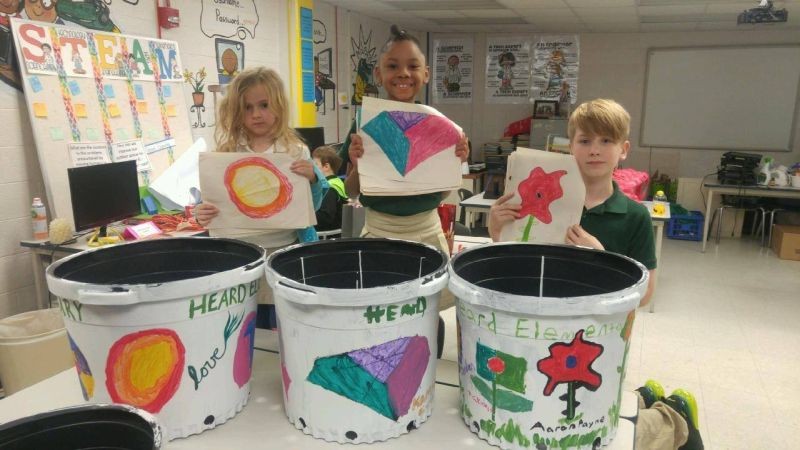 Lieberman came to Savannah in 2006 to go to SCAD, and after quickly falling in love with the children of our community, she never left.

“Make Things & Be Nice” is the motto that has sustained Loop It Up for nearly 12 years now, and it’s hard to find someone in Savannah nicer than Lieberman.

Eventually, the organization started to expand beyond knitting and crocheting to give children more ways to explore different types of art to express themselves.  Loop It Up’s growth has led to many partnerships in our city, including with schools and other community organizations. Lieberman is generous in sharing the praise of the success of Loop It Up with the partner organizations.

Loop It Up Savannah augments what Savannah Chatham County Public School System is already doing, working with after school programs.  Through 21st Century Community Learning Center grants, Loop It Up has a contract with SCCPSS to coordinate enrichment programs. “Staff and volunteers are in lots of schools every single day,” bubbles Lieberman.

“It’s important for children to see that arts careers are an option, making the most of these gifts that we have in our community,” she says.

The organization also provides summer camps for children throughout the city.

One success story that Lieberman recalls is a 7 year-old boy who was in her first class of students at the YMCA 12 years ago.  She recently ran into him again, now 19, at the ribbon cutting ceremony for the Savannah Urban Tree Garden. That young man is pursuing a career as a trained arborist and landscaper.

Lieberman still has some of his original artwork from all those years ago, and says that she takes joy in “seeing him doing something that he is passionate about, grown up and benefiting from community collaborations.  It is an example of what what we can do when we put aside our organizational egos and bring together partnerships in a really thoughtful way.”

Originally a knitting term, Lieberman says, “The name Loop It Up has kind of taken on a new meaning for us, because sometimes we don’t manage to close the loop, sometimes the dots don’t really get fully connected.”

She says, “I really see that as some of the work that we are here to do as an organization, just connecting the dots and making sure that families are able to take full advantage of the resources that organizations are working so hard to provide. Sometimes there are missed connections and missed opportunities, but because Loop It Up is in so many different neighborhoods and schools, we are able to help and connect the dots.” 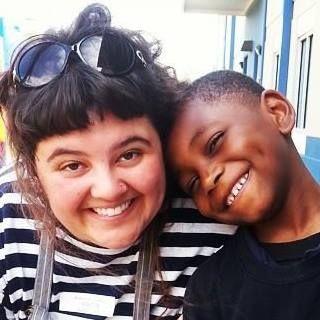 Loop It Up, Lieberman says, “taps into the power of art as a connector that brings people together.”

She further explains, “Creating situations where through art and creativity people end up standing next to somebody and having a meaningful experience and a creative experience with someone that they would not have in other situations, and that is really how social change happens.”

Many of the programs that Loop It Up run are completely volunteer driven. Lieberman’s philosophy about volunteer recruitment and retention is to “find people and let them share what they love to do anyway, an hour or two a week with our kids.”

“Everytime that you see kids just feel good about themselves,” Lieberman says. “There are so many things that are hard, and I can’t do anything to make those things go away necessarily.  I can make sure that there is all of this positive stuff going on, happening as consistently as all the things that are hard, and that is the commitment that I have made, and therefore this organization has made, to this community.  There is going to be this awesome stuff going on as much as we can make it happen and we are going to do it all together. We will do it in ways that really respects and values our community rather than from a top down approach.”

“Loop It Up brings many cultures together around community engagement.  The programs reach so many and epitomizes ‘connect, inspire, grow’ — always engaging various different sectors of the community that need it the most, especially the children,” Kreissler says.

“Art is the medium being used to connect kids to possibility.  Children begin to see themselves through art, and adults get to see children through their art. Kids get an opportunity to learn how to work in groups,” he says.

But Kohler recognizes that the success of Loop It Up has a not-so-secret weapon. “Quite frankly, Molly is on fire. Her heart and soul are so big and her hands are so capable.”

“Loop It Up is actively trying to expose children to many different arts, history, and culture in Savannah.  Starting partnerships, open to partnerships, at a very grassroots level in our community,” says Amanda Hollowell, Community Organizer at 9to5 Georgia Working Women and co-chair of the Black Heritage Festival.  9to5 Georgia Working Women is one of the too-many-to-list partnerships with Loop It Up.   Hollowell is also one of the judges for the “Soup It Up for Loop It Up 2019” taking place on Saturday, March 30.

Kohler, a regular at the organization’s signature fundraiser, Soup It Up, boasts, “You will be with a group of people where you don’t know everyone in the room.  The chefs do a fabulous job. There is so much joy in the room because you will get to meet some of the children.”

The event celebrates the end of the Annual Campaign and features a festive night of delicious soups and sides by local chefs, auctions, raffles, live music, and awards.

Lieberman admits that she has the best job in town, albeit not the easiest, but the rewards are abundant with smiles from “cute little people.”

'Soup It Up for Loop It Up' is at the Knights of Columbus, March 30, 7 p.m.  Restaurants competing for the honor of The Golden Soup Bowl and Platinum Ladle are Atlantic, B Matthew's Eatery, coffee.deli, Cuoco Pazzo Cucina Italiana, Fork & Dagger, Sweet Potatoes Kitchen, and Unforgettable Bakery & Cafe.

Tickets can be purchased from Loop It Up's website at www.loopitupsavannah.com and are $60 each, or $100 for a pair, and include your food and drinks for the evening.