A Nickel Bag of Funk

A resilient band of innovators, longtime Best Of winners A Nickel Bag of Funk have recently suffered a great tragedy. Driving back from seeing Stevie Wonder at NOLA Jazz Fest, vocalist Leslie Adele and founding manager/silent partner Kesi “Pip” Shaw were in a devastating car accident in Florida.

The trip was a part of a “fan tour” the duo had planned for the year—they’d caught Prince’s final show in Atlanta the week prior.

Nickel Bag’s number one fan and biggest supporter, Shaw, did not survive the crash; Adele was very seriously injured and was airlifted out of the scene.

Adele was released from the hospital last week and has been “furiously putting her feelings to melody,” Sabrina Cooper of OCS Entertainment, LLC shares on behalf of the band. “Leslie isn’t performing yet, but she has assured us that as soon as she is up to it, Peter at Dollhouse Studios is going to take this tragedy and turn it into our most personal and inspirational original material yet.”

The album will be named Epiphany after Pip.

In a post on the band’s Facebook page, Adele called Pip “the one who believed in us, even when I doubted. The one who knew greater was just over the horizon, if we just pushed a little harder. She supported us, kept us focused, fed us, chauffeured us, hit us upside our heads when necessary and offered us hugs when we needed. Protected us, believed in us, pushed us, paid us, financed us, and kept us in and out of trouble. She was the original number one fan and also our harshest critic. OK wasn’t good enough, we had to be great, and we did not want to disappoint Pip.”

As Adele heals, backup vocalist TreStyle has been taking the lead; Adele plans to return to the stage for ADA’s Kiss-A-Pig Gala. It’s an important and fitting return: Pip’s father suffers from diabetes, as did Adele’s grandmother, who passed away in 2002.

The band expresses gratitude toward Connect readers for consistently supporting and voting for the group each year.

“We do not take that for granted,” Cooper imparts. —Anna Chandler 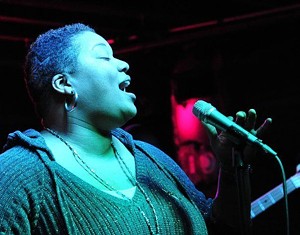 Music & Culture Best Of Savannah 2016 A Nickel Bag of Funk