“Everything I do is always extra,” she laughs. “It’s extra details, it’s always with materials I’ve never worked with before, so it’s troubleshooting. I love a challenge, and I hate a challenge. It’s a terrible thing, but I have to do it—it’s a vice.”

This project is certainly extra. Garrigan’s taken up residence at Cedar House Gallery for just a few weeks, where she’ll be working on “The Rest is All Drag,” her return to sculpture after three years away.

“It’s a relatively short residency and my first sculpture series,” says Garrigan, “so I’m hoping to have at least five finished products.”

She might be best known for her photography—Garrigan has been photographing Savannah’s drag troupe House of Gunt for years and created a campaign for the Savannah Sweet Tease Burlesque Revue this past summer—but she doesn’t like to limit herself.

“Whenever someone asks me what my medium is, I understand that question, but it kind of boxes artists in,” she says. “I like to tell them I work in whatever medium makes sense for the idea that I have, whatever medium will get the idea across. For this, I think it needs to be real. A photograph is two dimensional, and a sculpture of somebody’s face feels like a real person in front of you.”

In “The Rest is All Drag,” Garrigan uses Styrofoam heads in sculpture to accompany a portrait series of drag queens as fashion icons from the 1960s.

After an alternative printing class at SCAD, Garrigan learned about photo emulsion with digital skins. The transfer process in particular caught her eye. 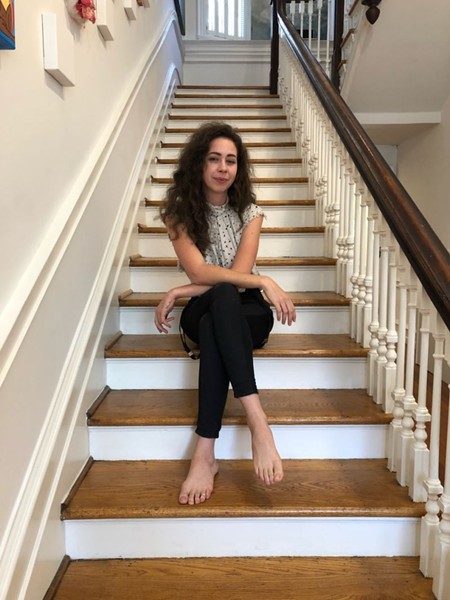 “I was working at Civvies at the time and surrounded by drag queens and mannequin heads and a lot of creative ideas,” remembers Garrigan, “so seeing the way they have manipulated their mannequin heads, it made me think to adhere one of the drag queens’ faces to a Styrofoam mannequin head.”

The switch from two- to three-dimensional brings to life a form of performance art that demands to be seen to be believed. A House of Gunt show truly is best experienced in person.

“You just have to come to the show and be enamored yourself,” says Garrigan. “You can’t peel your eyes away. It’s so intense. To me, they are a drag performance [troupe], but every show is performance art. It’s some idea they’re getting across in a really avant-garde way, which is not classic drag.”

Indeed, the House of Gunt subverts the classic cabaret-style drag performance and does some truly incredible things onstage, but there’s a whole group of people that will never know what that looks like.

“It’s hard for some people to wrap their head around, because it comes with so much history or with negative connotations,” shares Garrigan. “But besides that, with performance art, it’s in your face. It’s a real person in front of you, almost having a real conversation.”

Drag itself is subversive in the conservative South. As such, performers are often relegated to bars or private venues.

“As much as we are in a liberal pocket in Georgia, we’re still surrounded by a bit of that good ol’ boy culture,” says Garrigan. “My friend recently asked why she never sees drag queens out in the daytime, because where she lives, she sees them dressed up. I reminded her, “Hey, you’re in an area where that’s not a faux pas.’”

By doing the work she does, both in photography and this residency, Garrigan gives space to performers who aren’t always welcomed into certain circles.

“I’m really excited to have them perform in a gallery space, a little hoity-toity,” she says. “It brings them in. ‘Hey, they’re meant to be here. They’re just as much an art form [as anything else]. It’s okay to watch them and question, because that’s what they’re doing on the stage. What they’re doing is totally valid.’”

At the closing show on Nov. 1, drag queens will perform in the gallery amid the work that Garrigan created through the residency. Her work will obviously be on view, as well as the work from the juried show that Garrigan and Williams chose.

“A bunch of members from the community submitted work that deals with femininity and beauty,” she explains. “It could be any medium, any size, and just had to look like a cohesive showing. It’s a really broad array of ideas of age and gender, which is really fantastic.”

Next, Garrigan plans on moving to New York to pursue some other opportunities. But for now, she’s content with the project she’s worked on so passionately.

“This project is a celebration of self-creation. It’s a celebration of creating your own identity,” says Garrigan. “I think we’re in a world where we are told who we are, but why is someone else’s voice more important than my own when it comes to who I am?”

"The Rest is All Drag" will go on view Oct. 18. Open studio days are Thursdays and Fridays through Nov. 1. Garrigan will also host an artist workshop on Oct. 26 at 5 p.m. Cedar House Gallery is located at 122 E. 36th St.