OUR waterways are under siege.

Over five trillion pieces of plastic are already in the world’s oceans. 70 percent of marine litter is non-degradable plastic. Eight million tons of plastic trash leak into the oceans per year.

Hearing those numbers, you might feel resigned to hopelessness—after all, what can one person do to affect such a drastic change? 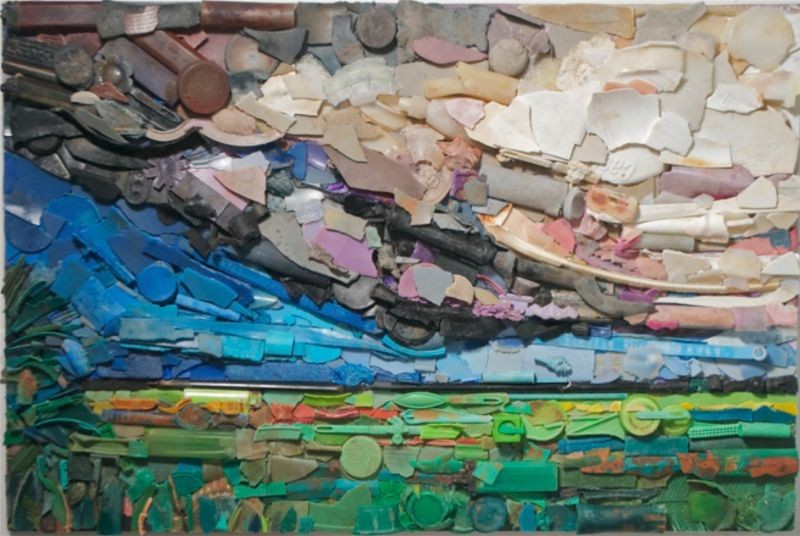 However, Making Waves at Ships of the Sea sets out to show us that a drop in the bucket can still fill it up, drop by drop.

Making Waves is a multi-faceted project that began May 18 with an art exhibition and website launch.

Wendy Melton, curator of exhibits and education at Ships of the Sea, curated the art exhibition, which includes art by twelve artists.

“I knew a few of the artists before, but there were some new interests, too,” says Melton. “I asked them to send me pictures of their previous work and their ideas of what they wanted to show—it wasn’t a juried show.”

The project has been in the works for over a year.

“Our goal was to eliminate single-use plastic. We have a lot of events here at the museum, and we were going through a lot of garbage,” explains Melton. “One day over a year ago I was walking around the grounds and found straw stirrers everywhere, and I was like, ‘This is so much!’ I knew I wanted to do this exhibition, just not what kind of format. But we couldn’t do it if we weren’t going to do something about the problem.”

The art in Making Waves is subtly shocking. Harry Delorme’s work uses found plastic to drive home the point of how prevalent plastic is in our environment.

“Harry has been doing this for over twenty years,” shares Melton. “He goes out to these locations and he picks up all this plastic from those sites. Then he takes a picture of the site and paints it and covers it with the plastic he found there. It’s labor-intensive—he’s creating the environment with what’s left of the environment.”

In addition to work in the gallery, Making Waves also includes installations outside in the North Garden. Cynthia Knott’s huge painting, Healing Waters, hangs above a pool of water. 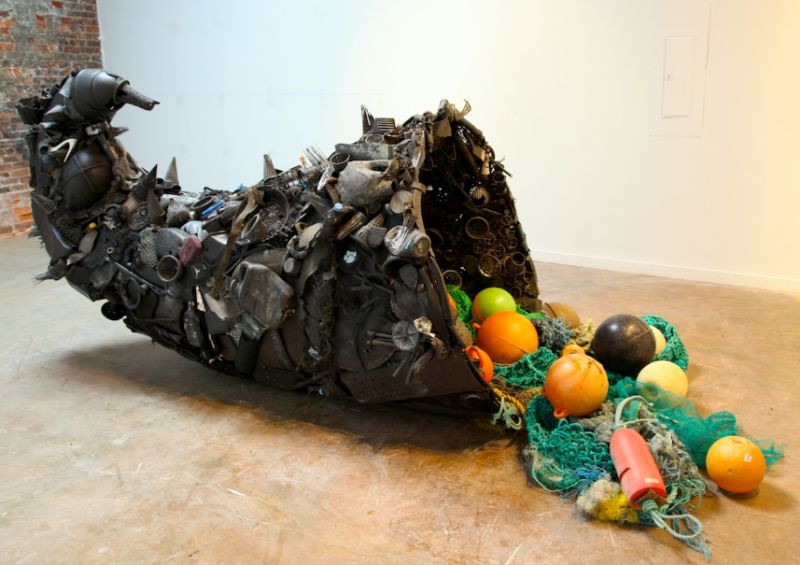 “Her concept is that for centuries, we’ve considered our waters to be healing, but now it’s time to heal our own waters,” Melton says.

The next step is the community conversation on June 15. The participants are Jason Buelterman, mayor of Tybee Island; Harry Delorme, artist and senior curator of education at Telfair Museums; Dr. Jay Brandes of Skidaway Island Institute of Oceanography; and Tim Arnold of Fight Dirty Tybee. The conversation will be moderated by artist Pam Longobardi and was put together by artist and activist Paulita Bennett-Martin.

“A friend and colleague of mine, Pam Longobardi, is doing a show at the Telfair, and through discussions Telfair identified me as a local expert on this issue,” explains Bennett-Martin. “The two of them said, ‘This is an issue that we’re not quite as familiar with and might you help us buy figuring out how to put together a discussion that will promote critical thinking?’ I think they wanted something new and different.”

Longobardi’s piece, “Bounty, Pilfered,” is a large cornucopia of plastic found in the ocean. That piece will be placed in the Jepson Center’s Complex Uncertainties exhibition on June 15.

“With environmental issues, people feel like they don’t have any way to help,” says Bennett-Martin. “We’re in an age of receiving an onslaught of problems, and that’s bad. It’s almost an exhaustion. They don’t feel connected to the problem; they often resign to being part of the solution and letting other people deal with it. If you approach things too scientifically, you put it in the silo of science, and people without that knowledge turn away. If you put it in the silo of activism, people look at things through deeper analysis and statistics. It takes any kind of perspective [brought] to the table to find solutions.”

Bennett-Martin knew to choose a wide variety of experts because she and Longobardi worked previously with a cleanup group in Belize.

“Since I had built the relationships, I catalyzed the community to come out and create public art with [Longobardi],” she explains. “That was my biggest lesson in why you need different disciplines in a discussion. Some people didn’t connect with the science part or weren’t interested or didn’t feel like they had what it takes, but they connected with the art part. It’s another entry point to the issue. Yes, you have to focus on an issue, but you have to remember how it’s connected to everything. It’s wild. The plastics thing, we use it for ourselves and then we lose it. Everything in the ocean is not there because we intended it to be. Who knows where it ends up? Maybe in a trachea of a whale on the other side of the planet.”

The discussion is preceded by a screening of the film “STRAWS” by Linda Booker, which shows the part that straws play in plastic pollution.

“It highlights the frivolous nature of straws,” Melton says. “Who really needs them, unless you have a medical condition? They can’t be recycled; they’re useless.”

She points out that recycling isn’t always the answer either since the recycling system in place in Savannah isn’t reliable.

“The best solution is just not to use it,” Melton says. “Give up straws. Carry a container with you. Use canvas bags. Those plastic water bottles can be recycled, but people aren’t doing it, so if you don’t use them you don’t have to recycle them.”

“We have our singular responsibility,” agrees Bennett-Martin, “but when it comes to pollution of our waterways, it’s the federal system that needs to be called into check. The amount of stuff can’t just fall on the shoulders of the consumer; it has to be regulated from the top down. It’s interesting how the government puts the responsibility on us. We can take action while also urging our government to make policies that protect us.”

“I hope people recognize it’s time for them to get involved,” she says. “That was the whole purpose for this conversation. It’s going to take all of us—it’s bigger than one entity or organization. It’s time for individuals to just take action and find one simple thing they can do. That’s been our carry-through for everything we’re doing in conjunction with this exhibition.”

Making Waves: A Community Conversation in partnership with Telfair Museums