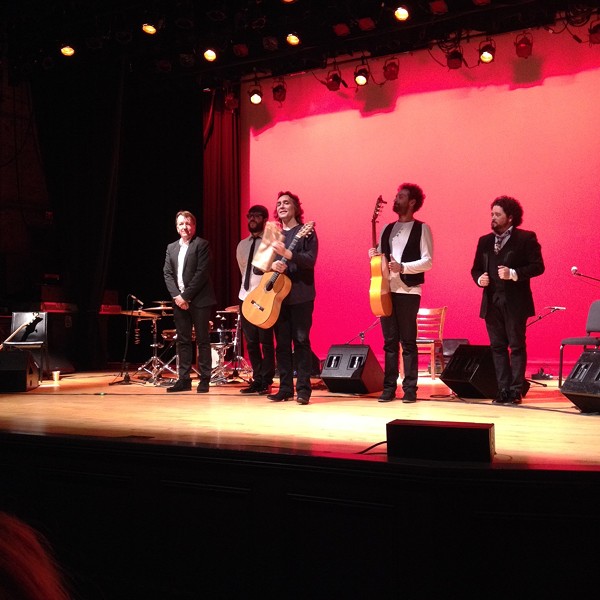 ONCE you’re bitten by the Flamenco bug it’s in your blood for life. And like jazz, it’s a musical genre particularly best experienced live.

One of the things for which I’m most grateful about the Savannah Music Festival is their dedication to featuring top-shelf Flamenco artists in the old world tradition. It’s a conscious decision which they are by no means obliged to do, and I and others continue to appreciate the effort most sincerely.

The Festival has booked many Flamenco luminaries, including Tomatito and of course the late legend Paco de Lucia. They followed up this year with a dynamic performance at the Trustees Theatre by Vicente Amigo, who passes for an “experimental” artist in a folk genre known for its fierce zeal in maintaining the purity of this unique art form that draws from Gypsy, Spanish Andalusian, North African, and Judaic musical traditions.

Amigo’s set mirrored the deeply communal aspect of any authentic Flamenco performance. You witness the passing-on of the tradition to the next generation in real time, as an older, established guitarist with great gravitas and charisma -- Amigo in this case -- shares the stage with younger performers clearly eager to learn from the master. And to impress him if at all possible!

The departures from tradition throughout Amigo’s performance are subtle, and mostly involve phrasing. The performance began in the typical Flamenco style, with the featured guitarist taking the stage alone for an extended solo, in Amigo’s case at least 10 minutes. Then the other performers – a percussionist, a guitarist, and the cantaor, or singer – walk onstage and the group show begins.

While Flamenco might be this world’s last unabashed celebration of raw unfettered masculinity – in the best sense of the word -- in the end it isn’t just a display of male virility through art (though it is certainly that!). Flamenco is an invigorating, passionate, yet ultimately warm and welcoming display of community.

Amigo’s most obvious nod to a jazz influence is the addition of an electric bassist for about half the performance. Playing a five-string bass, Scottish musician Ewen Vernal provided a solid bottom end for Amigo’s aggressive guitar stylings, unusually crisp and clear by Flamenco standards.

Indeed, while most critics focus on Amigo’s jazz/fusion elements, I see him as the most metal of all the Flamenco masters I’ve seen, more a shredder than a musical storyteller. Not only is his guitar tone quite assertive, his picado technique – the Flamenco style of picking with extremely rapid alternating of the index and middle fingers – is likely the most clearly articulated you’ll hear.

Singer Rafael de Utrera was used sparingly, but wasted none of his featured time. The young performer expertly channeled the distinctively passionate, improvisational cante Flamenco vocal style and clearly will be a continued presence in the Flamenco scene.

Few in the Flamenco/Gypsy music tradition speak English, and as per usual with these shows Amigo addressed the audience only in Spanish. Savannah Music Festival world music shows always bring a more diverse audience, and there were also many Spanish-speakers in the audience, many of whom responded with shouts of "Ole!" and other encouragement en Espanol.