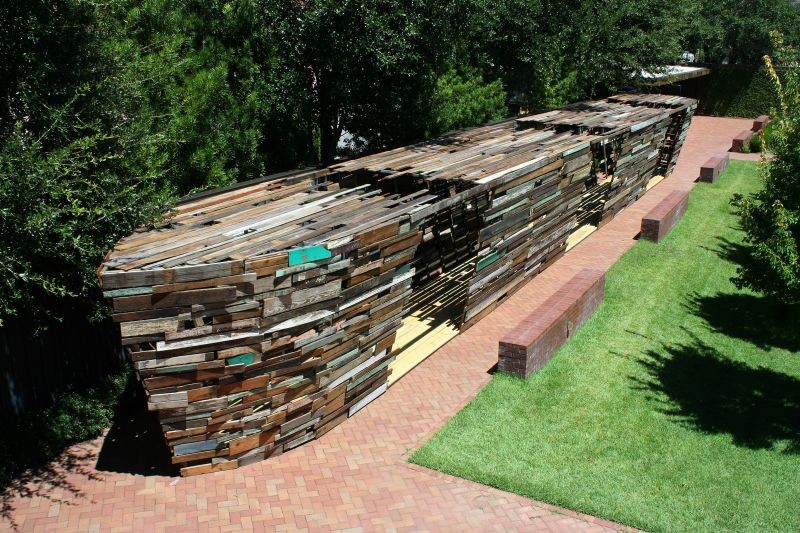 ON THE edge of the North Garden at the Ships of the Sea Maritime Museum sits a 75-foot long wooden husk of a ship.

Like an artifact from a dream, the ship lays in the garden as if it’s always been there–like it somehow washed up onto the brick walkway in the night.

On the contrary, it’s the result of over a year of planning and work by artist and SCAD professor of Foundation Studies, Chris Nitsche.

Even further, it represents the continuation of over two decades of fruitful examination of maritime forms by the artist.

The wooden hull is a site-specific installation by Nitsche titled “Gestalt”–the museum’s first installation of this kind. The ship will be unveiled to the public at an opening reception on Friday, August 26 at 7pm but will remain up at the museum through December.

If you can brave the heat, I promise it will be worth it. “Gestalt” is a rare art experience in Savannah, where outdoor works of large-scale art (let alone huge sculptures or installations) don’t come around very often.

Resting on the edge of the garden, the piece offered some cover from the high afternoon sun when I visited it last week. 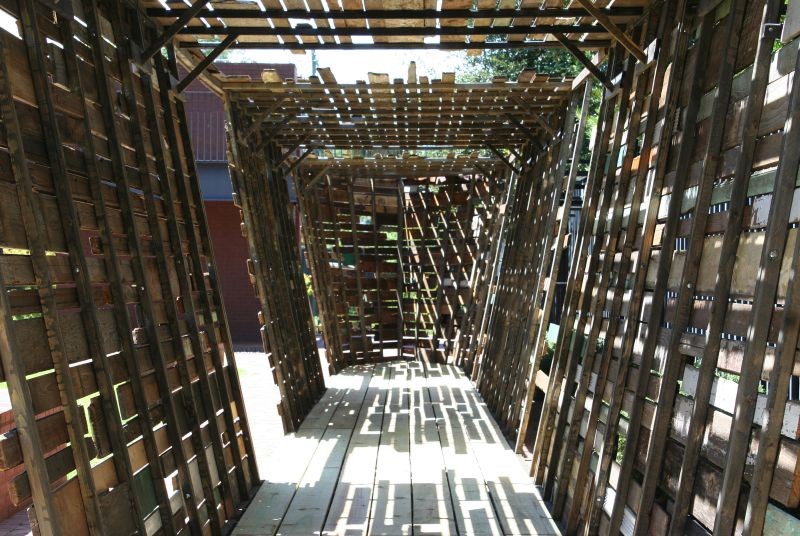 Wide breaks in “Gestalt”’s slatted wooden body invite visitors to step inside, creating a sense of total immersion with the artwork. From further away, the weather-beaten tones of its exterior seem to play exclusively with texture and color. Inside, it’s a different matter entirely.

The word “gestalt” means “an organized whole that is perceived as more than the sum of its parts.” It’s a term that appears at almost equal intervals in psychology and design textbooks.

In design, gestalt is usually associated with works that feature several discrete parts which, when unified by principles like symmetry or proximity, come together to form a cohesive image.

On the outside, Nitsche’s installation can be viewed as a “whole”–it’s obvious that what you’re looking at is the hull of a ship. The idea of a ship is so minimally represented though (Nitsche has scrubbed the piece of all but the most necessary visual markers) that once you step inside, it seems to melt away.

The interior of “Gestalt” is a playful world of light and shadow. It makes sophisticated use of the sun’s appearance through its wooden boards to create patterns of shifting golden sun and gray shadow that filter its entire 75-foot length.

The effect is a meditative one. With the sound of the garden’s many trees shifting in the breeze, the smell of heat on brick, and the visual effects of “Gestalt”, the overall experience is quite beautiful.

Amazingly, it’s an experience you can have for free.

The Ships of the Sea Museum will (very generously) offer access to the installation via its garden for free for the duration of its display.

The second component to the installation–an exhibition of process documents in the form of beautifully-rendered watercolors–is housed in the museum building. You’ll have to pay the admission fee to see it, but considering Nitsche’s heavy emphasis on process I would recommend it.

“Educationally, I think it’s important to offer [my process] up to my students or any students who are interested in the fine arts or in doing a grand-sized project like this one,” he told me.

“I want them to understand what’s entailed in something like this: the timeframe, the planning and structuring done in advance, as well as the fabrication and set-up on site, and the need for extra help. It’s a means to demonstrate the arc of creating. I like to de-mystify it.” 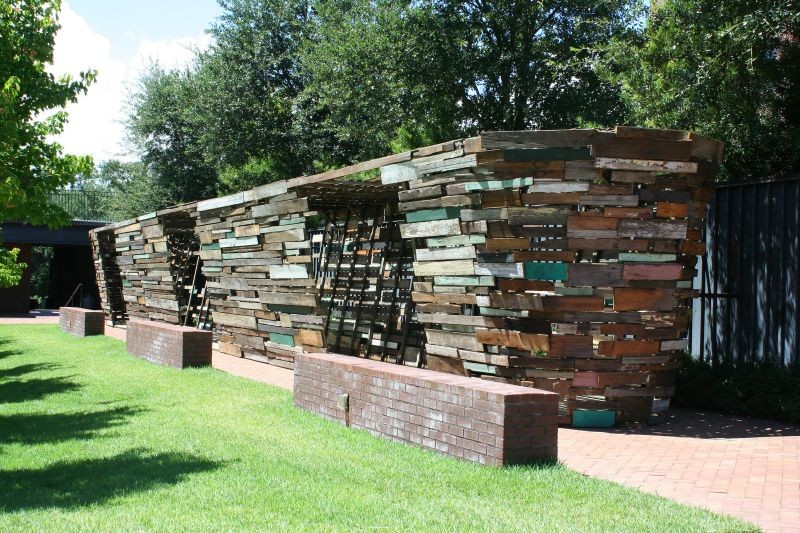 The process of making “Gestalt” real was no easy thing.

Nitsche began surveying the site and making initial drawings last summer. Since then, he’s been collecting materials (all of the wood was donated by the Southern Pine Company) and working with the museum’s director, Tony Pizzo, and staff to ensure the safety and structural integrity of the artwork.

Perhaps most notably, the installation process took place over eleven days during the hottest summer on record.

For Nitsche, it was more than worth it. The artist, whose fascination with ships stretches back to his childhood, is excited to be able to continue his exploration of what he considers to be “too rich of a subject to let go.”

“[Ships] mean so much throughout the world. There’s metaphorical and sociological associations related to a ship, what it could mean spiritually or practically... I find that I can explore so many various ideas and embody them in the form of a ship. I find that, for me, it’s created a wonderful sense of purpose and structure.”

“Gestalt” is free and open to the public during museum hours through December. If you’re interested in learning more about Nitsche’s process, view the entire thing at chrisnitscheblog.wordpress.com.