Run into Charlie Fog at the Tybee Post Theatre

A group full of fans, they’ve culled their experiences together to create a consistently authentic Dead experience

SINCE 2011, the Charlie Fog Band has been playing the music of the Grateful Dead. A group full of fans, they’ve culled their experiences together to create a consistently authentic Dead experience.

Their Tybee Post gig Saturday is their third at the venue.

The band — the name comes from the Dead tune “Tennessee Jed” — consists of Dan Berman on lead guitar, Jim Todesca on rhythm guitar, Peter Roaman on bass, Hugh McLauren on keyboard, Billy McIntosh on drums, and James Gartside on percussion. 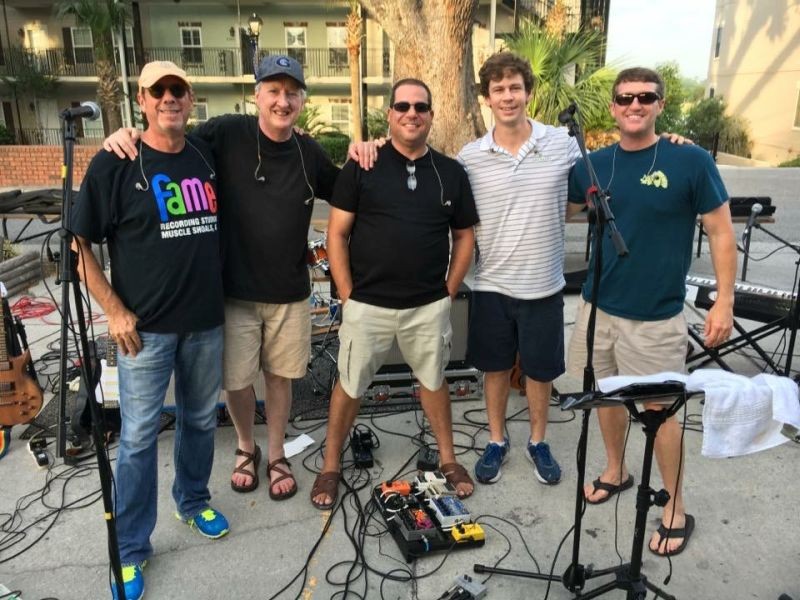 We caught up with Dan Berman and Peter Roaman last week.

How long has the Charlie Fog Band been around?

Dan Berman: The full band started in 2011. A buddy of mine who I was in a band with in Charleston had moved down here and we started playing as a duet. Then we picked up a mandolin player and did acoustic for a little while. Peter came along a year and a half ago. We were a Grateful Dead cover band in Charleston—a lot of us have a different history with the Dead.

How did you first get into the Dead’s music?

DB: I grew up in northeast Pennsylvania, so two hours away from everywhere.

PR: My best friends were Deadheads, like serious Deadheads.

Were you guys serious Deadheads too?

DB: It’s funny, I went to somewhere close to 70-plus Grateful Dead shows in my time, and I’d camp out and stuff, but always dressed [casually]. Jeans and a T-shirt, no dreadlocks, I didn’t sell stuff in the parking lot. When I moved to Atlanta, my brother-in-law is a musician there and I was doing bluegrass and Dixie jazz with him for a while. Peter’s been in bands his whole life, and as far as the Grateful Dead thing is concerned, it’s amazing how the music has really brought the people in the band together.

PR: As the new guy and also the least Deadhead of the band, the people come to see us and we have an incredible following, not just locally, which is amazing.

DB: It’s definitely a community for sure.

PR: I’ve played in bands my whole life, and it’s amazing for a band to have that big of a draw locally.

What gives Charlie Fog Band that big of a draw?

DB: It’s not just the music; I think it’s probably the honesty in which we play it. We don’t play note-for-note stuff.

PR: The Dead don’t play like that. I’ve learned a lot in the last year and a half.

DB: I think it’s the music and the honesty and maybe if I dare say the integrity we bring, and the community—all these people we bring together.

What makes the Grateful Dead’s music endure through the years?

DB: I wouldn’t put them in the same technical category as the Beatles, but it’s the same timeless quality.

PR: It’s very generational and it’s got an appeal. Not just, “Oh, I listened to them at this age.” I listened to them, then my brother, then his roommate in college. I used to work in a record store and the kid brothers of my friends would come in and buy it.

DB: The really close friends that come to see us play in Savannah that we’ve gotten close with, none of them have ever seen the Grateful Dead. They’re only 27 years old! They’ve never seen them. It’s so about the music. It’s American music. The Dead was one of the biggest cover bands in history.

PR: A big amount of songs are covers. They would do it in the context of a show and know it.

PR: They did a cover of “Won’t Get Fooled Again” by the Who, only once.

DB: They often played a song like “Big River,” a Johnny Cash tune, and they’d play that hundreds of times. It was part of their staple. So what we do with the music is we don’t necessarily do it exactly the way they did it. Some bands say, “We’re going to do a show from July 21, 1977.

PR: A lot of bands do albums.

DB: We really try to tap into the essence of a Grateful Dead show, or at least the way we interpreted it. Our rhythm guitar player, his first show was in ’76. My first show wasn’t until ’87. Our keyboard player is 27, he’s never been to a Dead show. Our drummer just turned 40 and he’s never seen them with Jerry Garcia. We’re obviously fans and we know the music and we listen to so many shows. So many of us have been to so many shows that we feel like we have our take on what the essence of a Dead show is. Generally we’ll do a couple sets. The first is very similar to how the Grateful Dead would do it. The second set is where we do more of the improvisational stuff. The set list really determines on what we played last gig.

PR: A lot of people come to see us at multiple shows.

DB: It’s what the Dead did. One year I saw them in Madison Square Garden in New York and they did nine or ten shows—they sold out the Garden. I went to three shows, and back in the day they had a circular in the parking lot that had a set list every show from all the previous shows. For the whole nine shows they were in in New York, they repeated two songs.

PR: They had a huge repertoire. I’ve been in the band a little while, and I’m like, this is the version from ’69, and a later version is different.

DB: I look at their music in that regard as symbolic of human growth. They do a song in ’69, they’re 40 years old in 1987 and have grown as musicians, therefore the music is more mature. Now, there’s something to be said about the raw, youthful energy of 1969, which none of us are tapping into [laughs].

What can fans expect from your Tybee Post Theatre set?

DB: We’ll basically be shooting for the field with a Grateful Dead theater gig. We’ll do our show, which in essence is what we’re hoping people would feel if they went to a Dead show, with all the ups and downs. We’re meandering and then something happens. It’s about the ride, the trip, the journey.

PR: That’s the thing about the Dead—a lot of bands were very structured. These guys were all about the moment. But on the other hand, this I learned, they were great musicians and spent an incredible amount of time rehearsing. Where things were, what they wanted to do. People thought they were spaced out.

DB: As far as the set list, we haven’t put it together, but we do know we want to do some fun stuff we don’t usually do. Fun—that’s what people can expect.

PR: The Dead at the Capitol, not in some field.

Tickets $15 adults, $5 children and 12 under via tybeeposttheater.showare.com.