Rooting down: Roots Up Gallery closes location, transitions to online

MAY 1 should have been a day of celebration at Roots Up Gallery.

This Friday marked six years since the folk art gallery opened its doors. How perfect that the anniversary naturally fell on a Friday; it was set to be a big day.

Instead, it was a somber day as artists trickled through the gallery to pick up their pieces and wave to owner Leslie Lovell from a distance.

May 1, instead, was the day that Lovell announced Roots Up Gallery would be closing its brick and mortar location and transitioning solely to online operations, effective immediately. 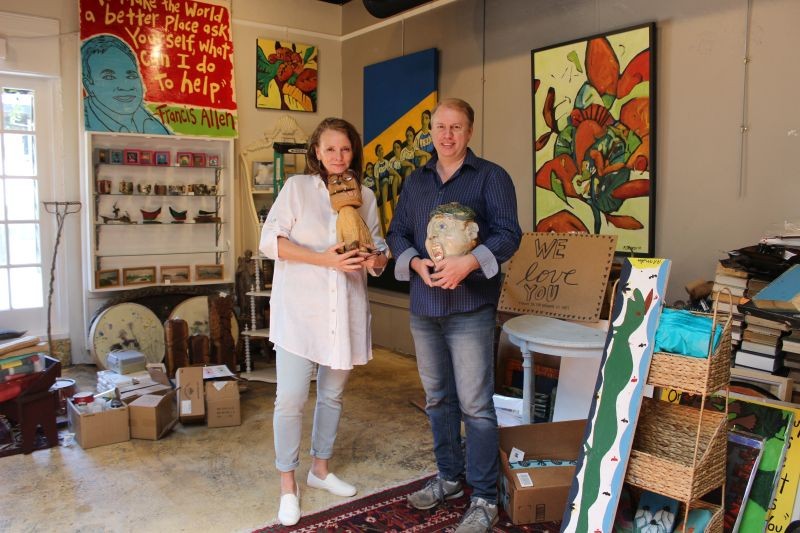 The shocking announcement wasn’t easy for Lovell to make, let alone come to.

“It wasn’t taken with a grain of salt to make that decision,” says Lovell. “I went over there today and I was like, ‘I’ve got this, I’m cool.’ I turned around and the gates opened; I was just bawling. I know it’ll happen tomorrow.”

Six years is a long time for a gallery to stay open in Savannah, but Lovell has felt each of those six years.

“It’s a freaking miracle that it did make it six years,” laughs Lovell. “This one’s just taking me down now.”

In 2014, Lovell was looking for a space to run a co-op gallery after another one had pulled its lease. She and her husband, Francis Allen, had been passionate about folk art for a long time.

“He was really into public art that was affordable and approachable,” remembers Lovell. “He knew a lot more about it than I did at that point because he went to Georgia when all that was coming out.”

The time was right to make the jump. Lovell and Allen found the space at 6 E. Liberty St., right above the Book Lady, in February. It was the perfect catalyst for a busy spring: Lovell and Allen got married April 19 and opened the gallery May 1.

But by February of the next year, Allen had become ill. By the time he went into hospice care two years later, Lovell was now also dealing with a less-than-pleasant landlord who was slow to repair hurricane damage and sought to raise rent on the building.

“Francis was literally dying and I was having to deal with him,” says Lovell of the landlord.

Allen passed away on Aug. 30, 2017, and Lovell and her business partner Russell Kueker—“Saint Russell,” as Lovell calls him—signed the lease at 412-C Whitaker St. not very long after.

“When the transplant came about and we had to leave immediately for Atlanta, Russell said he would be there to help with the gallery,” says Lovell. “I’m not lying, I threw the keys at him and I bolted. Russell did so much.”

For a while, Roots Up was hitting its stride in the Downtown Design District. Lovell and Kueker brought lots of great exhibitions by esteemed artists like Helen Durant and continued to be a treasure trove of folk art for both locals and travelers.

At the end of the day, through illness and moving and heartbreak and triumph, there was always Lovell.

Anyone who knows her doesn’t need me to confirm that that was a joke—Lovell is tirelessly selfless. Her love for folk art and the artists that created it has always been apparent through everything she does.

Roots Up represents about 30 artists, and Lovell called each one personally to break the news before announcing the closure on Facebook.

When the effects of the pandemic were first beginning to be felt, Lovell started the Creatives in Need initiative on her website as a way for unrepresented artists to have a place to show and sell their work. Artists retained 80% of the sale, and 20% went to benefit WRUU—Lovell didn’t take any of the money.

But as the days went on and the pandemic seemed like it would never end, it became harder for Lovell to run her business as she used to.

The answer seemed pretty obvious. Roots Up’s online presence had already been pretty good thanks to Lovell’s background in marketing and graphic design. The day after the City of Savannah went on lockdown, Lovell was up at 6 a.m. working on the website.

“I feel like it’s starting to take on its personality, and I think it’s going to get even more so,” says Lovell. “Before, it was just like, ‘Hey, here I am.’ But I think it’s just going to keep getting more and more personalized and incorporating the whole soulfulness that was in the gallery, that I hope will come through online.”

During this time, Lovell has also been accepted to Gallery 209 as a 3D artist and to Signature Gallery as a 2D artist, two big steps for her personal career. Lovell’s own artwork could tend to get overshadowed by the work she did as a gallerist.

Lovell is confident that this step is the right one and is taking the change in stride.

But still, the closure of Roots Up Gallery’s physical space serves as a sobering look at what could be ahead for the art world.

We don’t know how long the effects of the coronavirus pandemic will last. We don’t know which businesses will make it through the inevitable recession to the other side. Roots Up Gallery is just the first local gallery to make a significant change to their plans.

But, for Lovell, making big changes isn’t really anything new. She likens the experience to getting a job in a field that’s not what you went to college for. This is just another punch she’s got to roll with.

“It builds character, they say,” says Lovell. “I guess I’ve got a lot of character now.”