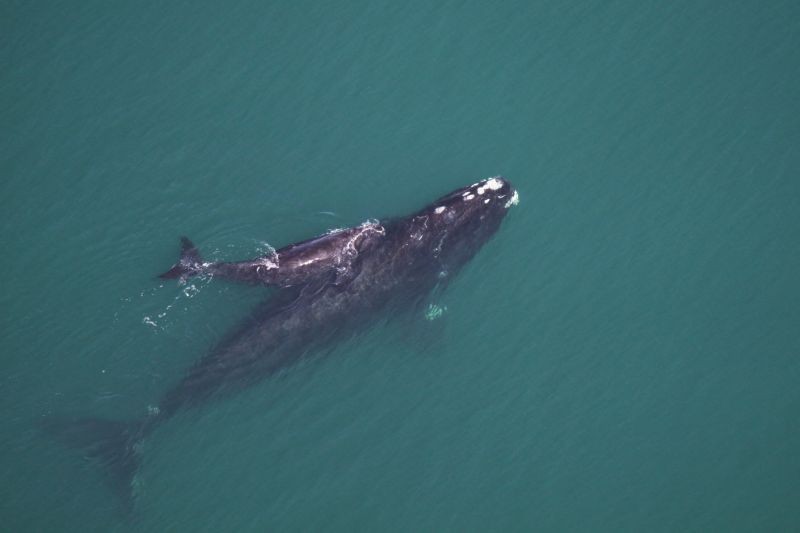 GIANT and graceful, the North Atlantic right whale is the most endangered of all marine mammals. Hunted almost to extinction for their blubber, there are only an estimated 450 of these majestic creatures left in their habitat.

In spite of their protection from poachers in U.S. waters, the right whales appear to be in further decline. A record 18 dead whales have been discovered in the past year, the most recent off the coast of Virginia Beach last month, and no newborn calves have been spotted over the winter.

It is a dire situation that has scientists wondering if right whales will become extinct from the Atlantic Ocean within the century.

Known as “the urban whale,” the massive mammals are often documented within sight of city shorelines. The species migrates annually along the Eastern seaboard, and mothers often calve along the Georgia Coast, where they are continually risk from injury and death from commercial fishing lines and strikes from shipping vessels.

“There’s a lot of wild speculation about what’s happening to the right whales, be it temperature changes or food source issues,” explains environmental scholar and activist Paulita Bennett-Martin.

“What we do know is that the majority of the carcasses were found entangled in fishing line, the kind generally used to harvest snow crabs and stock all-you-can-eat seafood buffets.”

In response, new line-less fishing techniques and other technology are currently being developed, and the National Oceanic and Atmospheric Administration is ramping up enforcement of laws meant to protect the whales from commercial industry. Sonar testing related to offshore drilling that damages the navigation abilities of right whales’ and other marine life continues to be opposed at state and local levels.

But true safeguards must come from strong legislative policy, and elected officials often respond to public outcry. In spite of its imminence, the right whale crisis has not yet found its way into the activism mainstream.

“I’m amazed at how many people aren’t even aware of the species and how close it comes to shore,” says Bennett-Martin. “No one is going to take action for a species they’re not aware of.”

In order to increase awareness of the North Atlantic right whale and its plight, Bennett-Martin has organized “Lines & Strikes” at Sulfur Studios on Feb. 9. The visual art exhibit and auction features whale-inspired pieces by local artists, including Julia Licht, Carole Wilde Jackson and Liz Rhaney as well as globally-known names like Jiha Moon, Tara Garrigan and Pam Longobardi, whose work often fetches four to five figures.

“We are showing artists from Spain, Korea and Atlanta as well as Savannah, and there will be opportunity to purchase pieces at a variety of price points,” promises the curator. “We want everyone to be able take part.”

Musician and spoken word artist Chase Anderson will present a live presentation of Moby Dick, and Gray’s Reef Foundation Chair and noted naturalist Cathy Sakas will speak. Tybee Island Marine Science Center staff are also bringing along a life-side replica of a North Atlantic right whale to give folks a tactical experience of the animals’ scale and beauty.

One hundred percent of funds raised go to Tybee Island Marine Science Center’s new right whale program, which will bring specific education and actions to schools and other public spaces.

“This is the only comprehensive right whale program in coastal Georgia, and we have a lot of work to do,” says Bennett-Martin.

The idea is to foster what the ocean scholar calls a “corridor of consciousness” in coastal communities, from the right whales’ northernmost habitat in Canada’s Bay of Fundy all the way down to the calving grounds of the Georgia and Florida coasts.

“By creating awareness, we’ve been able to save other species in our Eastern waters—the manatees, the sea turtles,” she reminds.

“Now it’s time to give our attention to the right whales.”