Ride on for MS

What would you do if a doctor told you that you’d be in a wheelchair in ten years?

That is, after you knocked over the brochure display and those jars of giant Q-tips and yelled until your throat stung?

What if you were given a diagnosis of multiple sclerosis, a disease that erodes the protective covers around your nerves until your legs and eyes and brain stop working, a deteriorative neurological condition for which there is no cure, one that can lay dormant for years then flare at any time or just slowly steal your strength day by day until you can’t remember what if felt like to run around a lake or pull weeds from the garden? You might head to bed, pull the covers up and eat ice cream until you exploded, and no one would blame you.

Or, you might realize that dairy bingeing isn’t all that helpful. So you’d join the fight, linking up with others seeking support and a cure. You’d find fortitude and counsel on how live well as part of the National Multiple Sclerosis Society, and if you’re feeling up to it, you’d show up to the annual Georgia Chapter MS Walk around Daffin Park, taking place this Saturday, May 7. If you’re feeling crappy, maybe you’d drag yourself there anyway, knowing that the empathy and positivity will buoy you like nothing else could.

If you were told your muscles would stop working sooner than later, you might eliminate all the inessential bullshit from your life and start doing whatever it was you said you really wanted to do with your time. Maybe you’d sell everything and hitchhike across America like local author Kim Evans did when she was diagnosed with MS 15 years ago. Maybe like Kim, when you started needing a cane to get around, you’d sit at the Sentient Bean every day and write a wonderful novel, The Bell Unrung, and when you realized you still had juice left, you’d start working on another book about your itinerant adventures.

Maybe MS would light the fire under your tush to do stand-up comedy, parachute out of a plane or spend every afternoon at the beach, even in the rain. 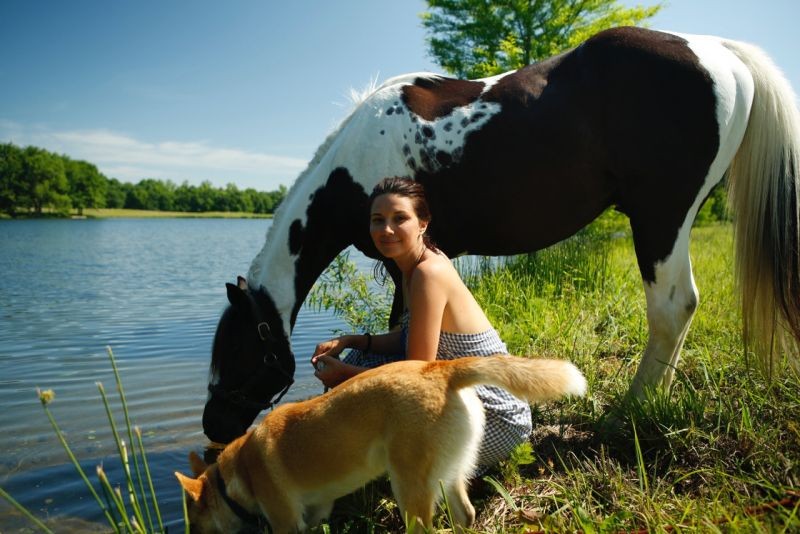 If you are Tamara Feldman, and a doctor pointed at an MRI showing more than a dozen lesions on your brain and spine, you’d tell MS to go screw itself and the horse it rode in on. Moreover, you’d throw a saddle on that horse and ride it 2500 miles to show it who’s boss.

This Sunday, the 35 year-old actress and musician will saddle up her handsome quarter horse, Bow, and begin a coast-to-coast sojourn from downtown Savannah to downtown Los Angeles. She calls this personal response to MS And So I Ride, and conceived the project to raise research funds as well as dash some of the myths about the often-but-not-always debilitating disease that affects 2.3 million worldwide.

“Part of this is to counter the judgments people have about MS,” explained the ambitious equestrian last week as she and left-hand man Stan McGriff prepared Bow for the open road at a rural campsite near Statesboro.

“When people hear you have it, they treat you differently. But there are a lot of people out there with MS who are running marathons, having successful careers, and navigating around their disease to achieve their dreams.”

Tamara is accustomed to dealing with judgment—along with answering the call of her dreams. At 20, she left her native Kansas for the dangling carrot of Hollywood, where the petite brunette has worked steadily in the brutal entertainment industry, appearing in countless commercials, films and lots of TV, including episodes of CSI, Gossip Girl and Dirty Sexy Money.

She also writes songs and performs music, and a year ago started to experience an odd buzz coursing through her arm when she played her electric guitar.

“It was like I’d stuck my finger in a socket,” she describes.

“I use lot of pedals, so I thought I was just shocking myself. But then it started happening when I was just sitting down.”

The neurologist’s damning diagnosis terrified her, especially since Tamara had been watching her sister struggle with MS for 15 years, losing her vision and ambulatory capacity. But her sister’s hardcore cigarette and drug habits have surely contributed to her decline, and the already health-conscious Tamara went the opposite route, going all in with juice fasts, yoga and meditation.

There’s must be something to such Californication, because today Tamara is clear-eyed and strong, hauling hay for Bow on her slight shoulders and editing her blog from the shade of the camper she’s sharing with Stan and her pup, Chumley.

She still has bad days, though. MS thrives on exhaustion and stress, and though riding Bow is her favorite activity in the world, she’ll board him mid-journey to fly back to L.A. and check in with her doctor. Yet the same cheerful combination of creativity and tenacity that has afforded her success in Hollywood has already carved the path for this epic endeavor. The cross-country trip is already 100 percent funded and the equipment either borrowed or paid for, so all donations to And So I Ride go directly to Race to Erase MS, a research supergroup comprised of the world’s top medical scientists.

While her relationship with Stan is purely platonic (he’s a production colleague of Tamara’s serious BF), they make an excellent team, she directing the action and he manning the video camera, driving the Jeep-hauled trailer and handling logistics. At night, the two shoot music videos in the light of the Jeep’s headlamps.

“We’re just entertaining ourselves as we go. I just want us to make art,” says Tamara.

She chose Savannah as her launch pad for its fairy tale beauty and because it’s the terminus of historic Highway 80, which happens to stretch all the way back to California. The tiny posse plans to pick up part of Route 66 as well, though in some places Bow’s safety will necessitate taking roads less traveled.

After they leave the stables at Savannah Historic Carriage Tours on Sunday, Stan will cruise ahead to scout the night’s camp as Tamara and Bow head out on Old Louisville Road into the sunset. Depending on her health and the weather, the odyssey could take almost a year. But in spite of the looming specter of limited mobility, Tamara feels like she has plenty of time before MS catches up with her.

Tamara, Kim and others show us that it’s possible to live courageously and outrageously with MS. They’re also reminders of the wide-eyed truth that there’s a slow-moving train coming for you, me, for all of us, whether it’s disease or old age or an actual train.

So what would—what will—we do with the precious juice we’ve got left?

Register for the 10am May 7 Walk MS at Daffin Park at facebook.com/MSSavannahGA