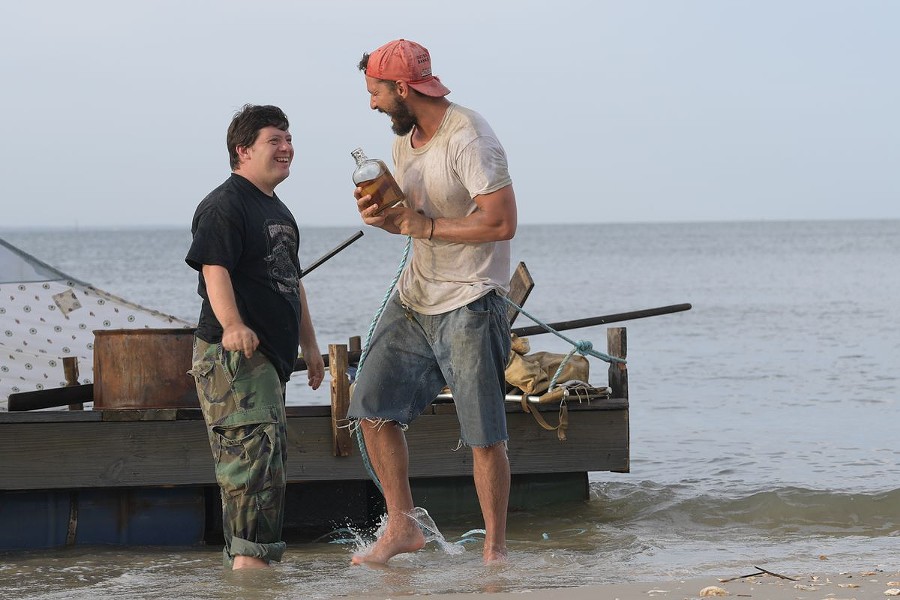 Filmed in (and around) Savannah but set in Virginia and North Carolina, The Peanut Butter Falcon is yet another example of real life turning into reel life.

Zack Gottsagen, a young man with Down syndrome, wanted to be an actor. Tyler Nilson and Michael Schwartz, who met Gottsagen at a film camp for people with disabilities, were so impressed with his self-confidence and determination that, at his prodding, they decided to write a movie for him. They swapped out his interest in one mode of show business — acting — for another — wrestling — and came up with The Peanut Butter Falcon.

Gottsagen plays Zak, who is forced to live in a retirement home because there’s no other place in the vicinity where he can be boarded. While he enjoys a friendship with his roommate Carl (Bruce Dern), he’s nevertheless understandably miffed at having to be the only young person living among old people. A caretaker named Eleanor (Dakota Johnson) is particularly sympathetic toward him, and she’s also the one most upset after he escapes.

Eleanor sets out after him, figuring he’s alone and unable to fend for himself. But Zak has managed to strike up a friendship with a most unlikely person: Tyler (Shia LaBeouf), a troubled guy still reeling from the accidental death of his older brother (Jon Bernthal in flashbacks).

Constantly getting into trouble and presently being pursued by a couple of irate fishermen (John Hawkes and rapper Yelawolf) whose supplies he has destroyed, Tyler becomes Zak’s unlikely traveling companion, with the two men forging a unique bond as they search for The Salt Water Redneck.

Along the way, Tyler informs Zak that he needs his own colorful moniker if he hopes to make it as a wrestler. Cue the title. Nilson and Schwartz have stated that they took their inspiration from The Adventures of Huckleberry Finn, and Mark Twain is even name-dropped at one point in the film.

Yet even if the movie hints at the same type of folksy Americana and examines a person who (like the novel’s Jim) will invariably be looked down upon by myopic members of society, the characters are very much the filmmakers’ own.

The Peanut Butter Falcon is neither condescending nor cloying, and its greatest strength rests in the relationship between Zak and Tyler. Tyler isn’t sentimental toward Zak, and he doesn’t treat him like a child, as even the well-meaning Eleanor is apt to do. This in turn allows Zak to enjoy a camaraderie that remains on equal footing.

Like Kristen Stewart and Robert Pattinson via their participation in the Twilight flicks, Johnson has been frequently criticized for her acting chops by dint of her co-starring role in the lambasted Fifty Shades series.

Yet she’s superior to her reputation, and, as with those vampire lovers, sustained work in indie efforts will bear that out. Here, she’s particularly noteworthy, playing Eleanor as a woman who’s well aware of her innate decency but also afraid of making the wrong move at any given moment.

As for LaBeouf, he has never been better in a movie. Generally cocksure in his characterizations, he reveals a newfound vulnerability that adds unexpected layers to what in other hands would have remained merely a “good ole boy” role.

The Peanut Butter Falcon is so intent on fulfilling every “feel-good” scenario that it loses its way in the final stretch: There’s a late-blooming romance that’s barely believable, as well as a fantastical moment that would seem more at home in one of those “magical realism” movies.

And the final scenes are inexcusably rushed, with little time to absorb the last-minute developments. Overall, though, the film does justice to its title. It frequently soars, and Gottsagen’s irresistible performance will stick with viewers.