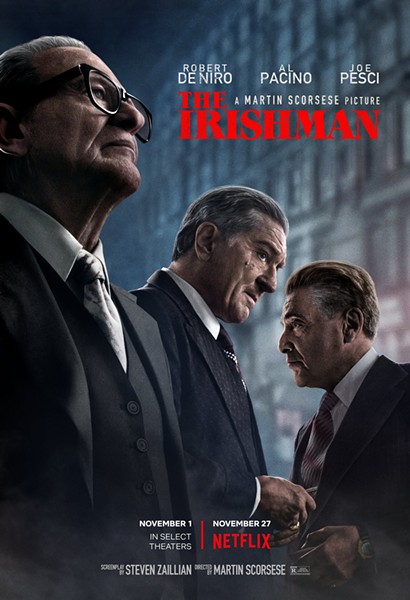 Having spent snatches of his career married to the mob, Martin Scorsese now returns to familiar turf with The Irishman, a film that’s epic in scope (over 250 credited performers), epic in cost ($140 million budget), and epic in length (3-1/2 hours).

If The Irishman (playing in select venues and now available on Netflix Streaming) isn’t quite the magnum opus one would expect or desire, it’s still a solid piece that provides parts to all the Scorsese regulars (Robert De Niro, Joe Pesci, Harvey Keitel) and marks the historic first teaming of Scorsese with Al Pacino (it’s rather startling to realize that these two have never worked together on a movie before).

Adapted by Steven Zaillian from Charles Brandt’s much-disputed book I Heard You Paint Houses: Frank “The Irishman” Sheeran and Closing the Case on Jimmy Hoffa, the film follows the controversial narrative that mob hitman Frank Sheeran (De Niro) was (by his own admission) the person who killed Jimmy Hoffa (Pacino) in 1975, the year the famed union leader went missing.

The movie examines how Sheeran moved up the ranks under the mentoring of syndicate bigwig Russell Bufalino (Pesci) and later became close friends with Hoffa before ultimately betraying him.

The Irishman often plays like a “Greatest Hits” compilation of moments from such Scorsese offerings as GoodFellas and Casino, following the expected rhythms and developments of these and similar gangster sagas. Its extreme length works against its overall potency — while the film is never dull, its energy does drain during a painfully protracted final half-hour.

Still, the movie is a worthy entry in Scorsese’s cinematic ledger, and, while the best performance comes courtesy of Pesci, its greatest gift might be that it allows De Niro to again tap into his formidable thespian skills for the first time in, oh, forever.
comment