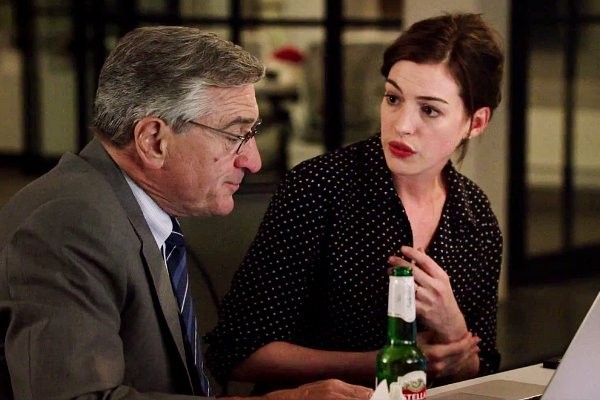 As a director, Nancy Meyers won’t ever be mistaken for one of the greats. An unfussy, straightforward filmmaker, she has no style to call her own, seemingly content if the actors hit their marks and their lines.

But as a screenwriter, she’s proven that she has wit and wisdom to spare, penning such sturdy efforts as Private Benjamin (her only Oscar nomination to date), the surprisingly rich Irreconcilable Differences (which was much more than just a movie about Drew Barrymore “divorcing” her parents, as the ads suggested), the delightful remake of The Parent Trap, and The underrated bauble The Holiday.

The new picture finds Robert De Niro as the goodwill ambassador for the older generation – he’s Ben Whittaker, a widower who’s bored with his retirement until he spots an ad for a successful startup company seeking a senior citizen to serve as an intern. Against underwhelming competition, he lands the job, and he’s assigned to serve directly under the company’s founder, a workaholic named Jules Ostin (Anne Hathaway).

While Ben’s an immediate hit with everyone else at the office – he’s personable, funny, and full of sound advice – Jules opts to keep her distance, although it isn’t long before he’s broken through her defenses to such a startling degree that he’s soon sharing morning coffee with her stay-at-home husband (Anders Holm) and serving as a babysitter for their adorable daughter (JoJo Kushner).

The occasional Silver Linings Playbook aside, the deterioration of De Niro’s career has been swift and brutal, the result of too many bald lunges at sizable paychecks. So it’s nice to see him underplaying rather than overacting, delivering a relaxed, sympathetic performance and matching up nicely with Hathaway’s comparatively jittery character (strictly platonic, it must be noted; the always welcome Rene Russo provides the romance as the company masseuse).

The Intern features many humorous moments, several appealing characters and even some subtext about the lunacy of dismissing this nation’s elderly when their value to society still holds some currency. Given all this, it’s a shame the movie isn’t a tad better.

Meyers’ greatest flaw as a writer is that, like Woody Allen 90 percent of the time, her stories and people live in a bubble of pampered privilege and tasteful décor, and this tends to lead to some rather rigid narratives with no room for unpredictable happenstances. Worse, the picture features a few embarrassing moments that suggest Meyers allowed her own 20-something intern to try his hand at scripting a couple of pages.

An overlong vignette involving a break-in is hopelessly contrived (though it does allow for some amusing chitchat regarding Ocean’s Eleven), while a couple of out-of-left-field bits involving Ben’s erection are sophomoric and completely out of place. Notwithstanding these limp developments, though, The Intern is dependable enough to earn a modest recommendation.

The Intern is not showing in any theaters in the area.