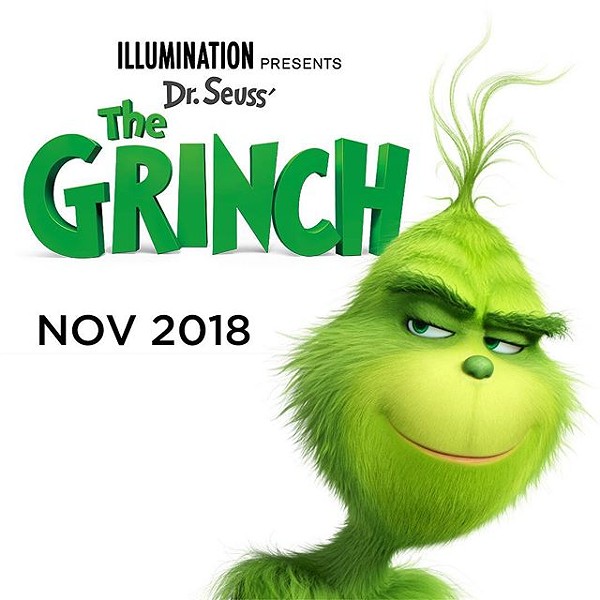 He’s not a mean one, this Mr. Grinch. And that’s largely what cripples The Grinch, the latest and lamest adaptation of Dr. Seuss’ classic children’s book.

Illumination Entertainment, which previously performed a hate crime on the Seuss canon with the odious 2012 adaptation of The Lorax, now returns with another cacophonous rendition that completely misses the charm and sly simplicity of the source material. Obviously, it doesn’t compare to the 1966 TV classic How the Grinch Stole Christmas, but it doesn’t even measure up to the much maligned 2000 live-action adaptation, which at least benefitted from a bravura turn by Jim Carrey.

This new picture offers Benedict Cumberbatch, and he should have been the perfect Grinch/narrator, perhaps even competing favorably with the masterful Boris Karloff, who was pluperfect in the ’66 version. But hold on.

In this latest version, Pharrell Williams handles the role of the narrator, and he’s perfectly pleasant but also aggressively dull. As for Cumberbatch, handed the (sugar)plum role of the Grinch, he has elected to chuck out his British accent and tackle the part with a flat American inflection. It’s a disastrous decision, further stripping this Grinch of any personality.

The basic story remains the same, as the Christmas-hating Grinch elects to make life miserable for the residents of Whoville, all of whom love the Yuletide season. But because the brief narrative found in Seuss’ text and in the ’66 version needs to be stretched into feature length, the filmmakers have elected to offer a tired backstory to demonstrate what made our not-so-jolly green protagonist loathe Christmas to such a fanatical degree (no, it’s not because of daddy issues, but good guess!).

The expanded length also requires that we spend more time with the Whoville citizens than would be deemed healthy – over the course of the picture, we find ourselves siding with the Grinch more than with the joy germs populating this insufferable burg, surely not the angle anyone sought.

The Grinch is loud, garish, and clumsy, but what ultimately sinks the picture is its interpretation of its title character. Frankly, he’s never nasty enough, taking time out to (among other niceties) dote on his faithful canine companion Max and grow misty-eyed over distant memories.

You’re most assuredly not a mean one, Mr. Grinch. Mildly aggravated is probably the best we can muster.

The Grinch tells the story of a cynical grump who goes on a mission to steal Christmas, only to have his heart changed by a young girl's generous holiday spirit. Funny, heartwarming and visually stunning, it's a universal story about the spirit of Christmas and the indomitable power of optimism.

The Grinch tells the story of a cynical grump who goes on a mission to steal Christmas, only to have his heart changed by a young girl's generous holiday spirit. Funny, heartwarming and visually stunning, it's a universal story about the spirit of Christmas and the indomitable power of optimism.

Dr. Seuss' The Grinch in 3D

The Grinch: The IMAX 2D Experience