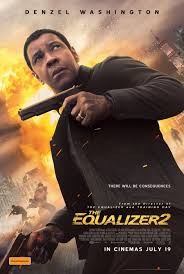 Much has been made of the fact that Denzel Washington, who’s been appearing in movies since 1981, has never starred in a sequel. In an industry that gets high off the fumes of highly lucrative follow-ups, that’s an incredible — and impressive — fact, and while it’s hard to see sequels to, say, Malcolm X or Flight, other Denzel vehicles are certainly more franchise-friendly (personally, I would have enjoyed seeing his detective from Spike Lee’s Inside Man tackle more criminal capers, but a proposed sequel was ultimately cancelled).

The Equalizer 2, therefore, represents the first time that the actor returns to the screen essaying the same character — in this case, it’s Robert McCall, a former CIA operative who employs his particular set of skills to aid the helpless and hopeless among us. Believed to be dead by everyone save for his CIA pal Susan Plummer (Melissa Leo) and her husband Brian (Bill Pullman), McCall is thus able to slip beneath society’s radar in order to perform his good deeds.

Released in 2014, The Equalizer (itself based on the popular 1980s TV series starring Edward Woodward) was a satisfying action yarn in which McCall protected a battered teen prostitute (Chloë Grace Moretz) against a gang of murderous, misogynistic Russians.

Watching McCall deal with all manner of evildoers (not just Trump’s buddies but also corrupt cops and petty crooks) over the course of the film was a cathartic experience, but the movie also worked because of its kinetic action scenes as well as a gradual reveal of the layers of Washington’s character.

The Equalizer 2 offers no such pleasures. This is a particularly dreary movie, one which makes no attempt to freshen up or even disguise its rote storyline. The film gets off to a vigorous start, as McCall tackles some kidnappers in Turkey and then, while serving as a Lyft driver in Boston (in the previous picture, he worked at Home Mart), beats the living hell out of a hotel room full of Men’s Rights Activists.

But then the picture turns stupid and stuporific. As in many an unimaginative sequel, This Time It’s Personal™, meaning that (modest Spoiler alert, though it is in the trailer) Susan gets killed once she gets too close to the truth regarding a faked murder/suicide (that truth is so fleetingly and haphazardly explained that it scarcely matters; Susan might as well have been slain for trying to steal a neighbor’s cherished pie recipe).

There’s a betrayal that identically mirrors the one from last week’s Skyscraper, meaning that it’s equally easy to sniff out the villainy right from this particular character’s introduction. A subplot involving McCall’s mentoring relationship with a young kid (Ashton Sanders) seems to have been imported from a lesser ABC Afterschool Special from the 1970s.

It’s laughably absurd, and just one more reason why The Equalizer 2 is less than the sum of its slickly oiled parts.

Denzel Washington returns to one of his signature roles in the first sequel of his career. Robert McCall serves an unflinching justice for the exploited and oppressed - but how far will he go when that is someone he loves?

Denzel Washington returns to one of his signature roles in the first sequel of his career. Robert McCall serves an unflinching justice for the exploited and oppressed - but how far will he go when that is someone he loves?

The Equalizer 2: The IMAX 2D Experience