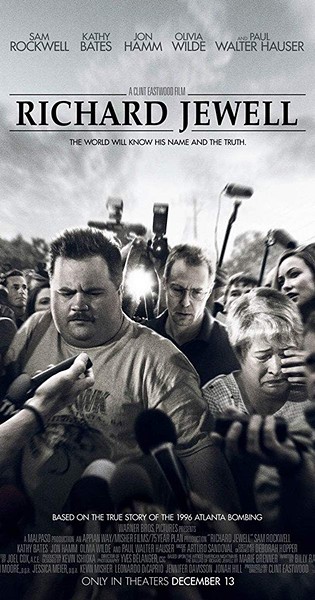 It’s unlikely that a more hypocritical movie than Richard Jewell will see the inside of theaters over the course of the next several months. The film is supposed to be about the championing of an innocent man — a hero, no less — who was unjustly and irresponsibly maligned, and that’s a fine and noble pursuit.

But when the picture repeatedly sets said objective on the backburner while taking equally irresponsible potshots at other targets, then it tends to diminish the points the movie is attempting to make.

Paul Walter Hauser, who previously played the dimmest of white supremacists in Spike Lee’s BlacKkKlansman, stars as Jewell, the security guard thrust into the national spotlight when he discovers a backpack containing explosives at Atlanta’s Centennial Olympic Park during the 1996 Summer Olympics.

While the pipe bombs do eventually explode, Jewell manages to herd countless civilians away from the area, resulting in only one death rather than the hundreds that conceivably could have occurred.

Initially, Jewell is hailed as a hero, much to the delight of his proud mother Bobi (Kathy Bates). Before long, though, the FBI receives information that places Jewell clearly in its crosshairs. He becomes the agency’s prime suspect, and that information is soon relayed to the public by zealous Atlanta Journal-Constitution reporter Kathy Scruggs (Olivia Wilde, oddly not provided a pencil mustache to twirl).

A frenzied news media swallows the security guard whole, with even Tom Brokaw painting him in an unflattering light. Jewell has no choice but to obtain the services of a lawyer, so he nabs local attorney Watson Bryant (Sam Rockwell).

In reality, the problem wasn’t that the FBI initially focused on Jewell — after all, he fit the profile of the “lone bomber,” he had raised flags in the past (including being arrested for impersonating a police officer), and other recent incidents tracked by the FBI had involved a law officer planting explosives and then pretending to find them in order to be the hero.

The problem wasn’t even the AJC’s initial news story, which simply stated that Jewell was being investigated by the FBI (true). The problem was the period, as this particular circus occurred one year after the start of the O.J. Simpson trial and two years after Tonya Harding and the knee-whacking incident.

It was a bloodletting time when the media worked 24/7 to find the juiciest stories to satisfy sensationalism-seeking viewers and readers (honestly, this period still continues, with no expiration date in sight).

But rather than even squint in the direction of the national mood and place the story within its proper context, director Clint Eastwood and scripter Billy Ray (already repped this season via the duds Gemini Man and Terminator: Dark Fate) set their sights squarely on the usual boogeymen. At least the FBI gets sort of a pass since the aggressive agent on the case (Jon Hamm) is a fictional character.

Not so Kathy Scruggs, a real-life journalist with a reputation for having been a superb reporter with killer prose and an inclination to protect her sources. In this hit job, though, she’s a fire-breathing nitwit who not only has her male colleague handle the heavy writing but, most offensively, sleeps with a source to obtain her info.

Since Scruggs died at the age of 42 of a prescription overdose (like Jewell, who passed away at 44 from diabetes-related issues, she remained haunted by this ordeal), it’s not surprising that her friends, family and former colleagues have defended her since she’s not able to do so herself.

Yet even Jewell doesn’t come off great, as he’s painted as a simpleton on the order of Forrest Gump (the real man was slightly more complicated and rounded, and he even had girlfriends and later a wife). This portrayal further suggests that he isn’t really the reason for the film but rather an excuse, with the real focus elsewhere.

Aside from last year’s amateurish The 15:17 to Paris (which I still maintain was directed by an intern while Eastwood slept in his comfortable hotel bed), Richard Jewell benefits from the same professional sheen that the director brings to all his projects. But it’s become increasingly disappointing to note the reversal of the thoughtfulness of his earlier films.

As for the real bomber of the 1996 Olympics? That would be Eric Rudolph, barely mentioned in the film since he's a right-wing nut who murdered a police officer and blew up abortion clinics and homosexual establishments, and Clint wouldn't want these messy details to get in the way of his systematic "alternative facts"/”fake news” takedown of societal safety nets.

Directed by Clint Eastwood and based on true events, “Richard Jewell” is a story of what happens when what is reported as fact obscures the truth.

“There is a bomb in Centennial Park. You have thirty minutes.” The world is first introduced to Richard Jewell as the security guard who reports finding the device at the 1996 Atlanta bombing—his report making him a hero whose swift actions save countless lives. But within days, the law enforcement wannabe becomes the FBI’s number one suspect, vilified by press and public alike, his life ripped apart. Reaching out to independent, anti-establishment attorney Watson Bryant, Jewell staunchly professes his innocence. But Bryant finds he is out of his depth as he fights the combined powers of the FBI, GBI and APD to clear his client’s name, while keeping Richard from trusting the very people trying to destroy him.

Richard Jewell is not showing in any theaters in the area.