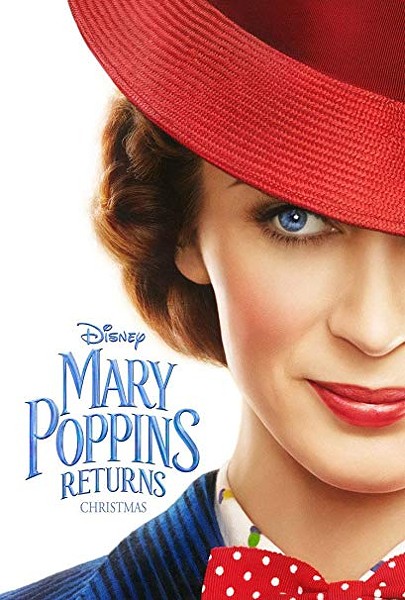 While millions of moviegoers both young and old continue to find 1964’s Mary Poppins a motion picture that’s practically perfect in every way, the dirty secret for those not completely invested in its nostalgic pull is that it’s ofttimes arid and unwieldy. It’s packed with delightful songs and electrifying interludes, but it’s also frequently lumbering when it should be lithe, and its 140-minute length requires us to spend too much time with the rather drab Banks parents.

As for Julie Andrews, she excels in her Oscar-winning turn as the title nanny, but the part doesn’t allow her much variation or variety — she’s actually much more enchanting and alive in the following year’s smash musical The Sound of Music.

Ergo, one’s enjoyment of the 54-years-later sequel Mary Poppins Returns might depend on one’s POV regarding the original film. If one holds the OG Mary Poppins in the highest esteem imaginable, then this follow-up is sure to disappoint; if one can see room for accommodation and equality, then this new film is sure to entertain.

Certainly, even the detractors already popping a cap in Poppins have conceded that Emily Blunt was the right choice to assume the Andrews mantle. As the magically endowed nanny who reappears in 1935 (25 years after the first film’s timeframe) to again aid the Banks family, she’s an absolute delight, retaining Andrews’ frosty demeanor but adding a spark of sly mischievousness to her interpretation.

The Banks family can certainly use some assistance, as the now grown-up children from the first film, Michael (Ben Whishaw) and Jane (Emily Mortimer), are in danger of losing the family home to the Fidelity Fiduciary Bank (repped by Colin Firth’s wolfish president) and Michael’s three small children are being ignored by their well-meaning but weary and widowed father.

Therefore, it’s up to Mary to entertain the moppets, receiving invaluable assistance from Jack the lamplighter (Hamilton guru Lin-Manuel Miranda) and Mary’s daffy cousin Topsy (more overexposure for Meryl Streep). Cue the songs as Mary takes the kids on a nautical adventure (“Can You Imagine That?”), Mary and Jack take part in a music hall extravaganza alongside animated figures (“A Cover Is Not the Book”), and Jack and his fellow lamplighters help the children find their way home (the showstopping dance number “Trip a Little Light Fantastic”).

Mary Poppins Returns is slow getting out of the gate (the first song, “(Underneath the) Lovely London Sky,” is one of the weakest), but once Blunt shows up, it picks up considerably. Blunt is the linchpin, yet the entire cast is well-chosen, and it’s particularly delightful to see the co-star of the original film, 93-year-old Dick Van Dyke, turn up to briefly perform a soft-shoe number (other old-timers invited to the party are 93-year-old Angela Lansbury as the Balloon Lady and 77-year-old David Warner as Admiral Boom).

In Mary Poppins Returns, plot doesn’t count as much as pomp, and the central figure occasionally feels superfluous even in her own film. But this is certainly of a piece with other recent Disney pilfers of the past, endeavors like the live-action Beauty and the Beast and the recent Star Wars flicks.

The force of originality may not be particularly strong in any of these movies, but as long as they keep the customer satisfied with their irresistible something-old-something-new aesthetics, it’s hard not to chomp down on these spoonfuls of cinematic sugar.

The film is set in 1930s depression-era London (the time period of the original novels) and is drawn from the wealth of material in PL Travers' additional seven books. In the story, Michael (Whishaw) and Jane (Mortimer) are now grown up, with Michael, his three children and their housekeeper, Ellen (Walters), living on Cherry Tree Lane. After Michael suffers a personal loss, the enigmatic nanny Mary Poppins (Blunt) re-enters the lives of the Banks family, and, along with the optimistic street lamplighter Jack (Miranda), uses her unique magical skills to help the family rediscover the joy and wonder missing in their lives. Mary Poppins also introduces the children to a new assortment of colorful and whimsical characters, including her eccentric cousin, Topsy (Streep).

Mary Poppins Returns is not showing in any theaters in the area.