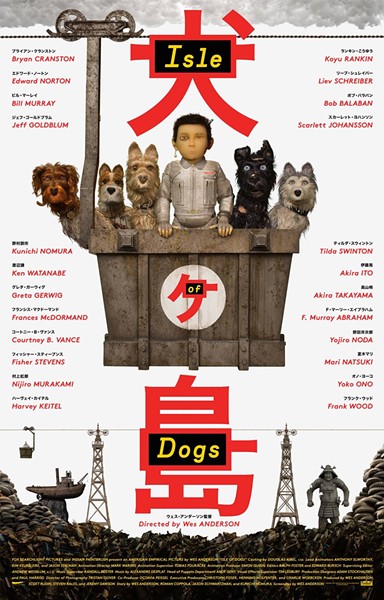 It probably doesn’t need to be reiterated, but here goes anyway. Despite a rating that allows for the admission of children, despite the animated nature of the piece, and despite the focus on our cuddly canine companions, Isle of Dogs is decidedly not one for the kiddies.

In a pinch, parents are in fact probably better off taking their youngsters to Fifty Shades Freed than the latest from Wes Anderson – at least in that film, there are no shots of a dog’s skeletal remains, the result of nobody being able to get the poor mutt’s locked cage door open.

On the other hand, adults are encouraged to check out Isle of Dogs at their earliest convenience. Anderson’s first film since his grandly entertaining gem The Grand Budapest Hotel is a dazzling and heady achievement, employing quirky animation to relate its tale of a futuristic Japan in which all dogs have been confiscated to nearby Trash Island after a canine-related virus has swept through the country.

The fascistic ruling class ultimately seeks to kill, not just quarantine, all dogs, with only a pro-dog professor (Akira Ito), his dedicated assistant (Yoko Ono!) and his courageous students seeking to thwart this insidious agenda. For his part, a little boy named Atari (voiced by Koyu Rankin) misses his dog Spots and sets out to Trash Island on a rescue mission. Upon arrival, he encounters resistance from a gruff stray named Chief (Bryan Cranston) but receives assistance from a quartet of former pets (Edward Norton, Bill Murray, Jeff Goldblum and Bob Balaban).

Naturally, the one student who rallies the others to save the dogs is American (Greta Gerwig), but aside from this opening for charges against the usual “white savior” syndrome exhibited in movies, Isle of Dogs is otherwise too fantastical to be compared to any real-world parallels.

The stop-motion animation is even more impressive than that displayed in Anderson’s previous romp in this realm, 2009’s Fantastic Mr. Fox, and the multi-faceted plot continually branches out in imaginative and unexpected ways.

Canines will understandably object to the phrase, but Isle of Dogs is clearly the cat’s meow.

ISLE OF DOGS tells the story of ATARI KOBAYASHI, 12-year-old ward to corrupt Mayor Kobayashi. When, by Executive Decree, all the canine pets of Megasaki City are exiled to a vast garbage-dump called Trash Island, Atari sets off alone in a miniature Junior-Turbo Prop and flies across the river in search of his bodyguard-dog, Spots. There, with the assistance of a pack of newly-found mongrel friends, he begins an epic journey that will decide the fate and future of the entire Prefecture.

Isle of Dogs is not showing in any theaters in the area.