The water alone is a show of its own. 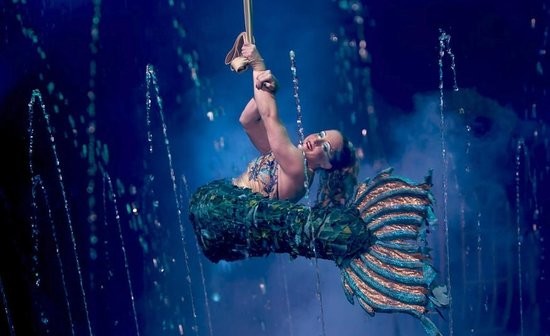 A MILLION-DOLLAR stage, 35,000 gallons of water, acrobatics, and blood pumping stunts are four components amongst many that brought and kept the crowd during this week’s visit from Cirque Italia.

While holding the title of America’s first official water circus, Cirque Italia travels for 48 weeks to ten cities. Six on the west side and four on the east, including but not limited to Pensacola, FL, Gulfport, MS, Baton Rouge, LA, Savannah, GA and Charlotte, NC.

Behind a gate made of shaped metal bars and an arched sign that read “Cirque Italia,” three large blue and white stripped tents sit tall and firm in the middle of Meding St., guarding the even larger big top behind them.

The three tents housed the concession stands “which is really nice so because you don’t really get pestered while enjoying the show, everything is right here when you walk in,” said Sarah Elizabeth, one of three girls who perform acrobatics in the finale of the show using a large suspended circular chandelier made from metal bars as well.
“They like to make fun of us back stage, saying things like “Ohh, it’s the onion girls,” it just a big round sphere looking thing, and there is me and two other girls that perform on it together as a trio.”

Sarah talks about the great amount of trust that goes into putting together the pieces of the stage, getting the water to operate properly, and in a way that reflects the happenings of each circus act.
"There is really no bad seating here, everything is pretty close, and that's just what I mean when I say intimate.” click to tweet


“Thankfully we have some really trusted tent crew and stage hand. They pick us up and down while we show off out flexibility and strength by hanging there like little bad girls, but the water aspect is one of my favorites, its makes everybody go 'Ohhh.””

At first arrival, the circus stage appear as only a circular, 360 stage, allowing each audience member to see everything taking place under the tent, but not too far into the show, men in black pants and black shirts that read “Tent Crew,” come onto the stage and begin hooking chains into the top half of the floor, just moments later, using either a button or a rope, the stage was raised up into the air, with water falling down from the bottom, and fountains spewing water inward and outward of the stage.

Only piece left was a small round platform in the middle of what at the moment was a pool. “They call it a donut, it’s a ring of light that when it comes up, it creates a water curtain, and so what makes this water curtain so unique is that the water droplets, actually produce images.”

During the first a second half of the show, aside from two rather charismatic clowns who distracted the crowed from the setup being done on the blacked out stage, the audience witnessed the donut and all its power.

“The water alone is a show of its own, it’ll do shapes like zig-zag patterns, hearts, roses, really cool images, they change it to where it’ll be like rainbows, it’ll set on different colors, depending on what act is on stage, the water kind of mingles with the acts, so you can get a better feel for the show.”

Though many come to a circus only thinking of the performers and what they are going to do, a lot of preparation goes into putting on a great circus act and guaranteeing the audience has a breathtaking experience. Even the performers help with concession and various other back stage things.

“It’s not just us working the show, it’s our sound guy and it’s our water engineer. They also must have a feel for our routines as well."

The clowns were a big highlight for the vast array of children in attendance, lines upon line stood ahead of them at the end of the night for pictures, questions and comments, “the clowns are awesome and the come around through here [tent walk way].”

Between each act clown Alex and his clown brother entertain the entire audience with crowed interaction, an iPhone 20plus, a large foldable trampoline, and their wacky up-to-date dance moves.

Sarah expresses that her favorite part about working with Cirque Italia is the feeling for intimacy “Cirque Italia is probably one of my favorites actually, it’s fairly different from your standard three ring shows, at other circuses there is just a lot always going on but here it a little more intimate. There is really no bad seating here, everything is pretty close, and that's just what I mean when I say intimate.”

It is evident that circus life isn’t for everyone, the extensive traveling and training can become overwhelming for some, while for others, the passion for performing and advancing in their craft supersedes anything other than that. “You have people who are born into the circus and then you have people who were born for it.”

Cirque Italia will be in Savannah, GA until April 2, and will then be sharing their passion with Charlotte, North Carolina. Tickets prices vary in seating area, student discount available. For more questions or more information see the Cirque Italia website at CirqueItalia.com