Regina Thomas: ‘I intend to win’

REGINA THOMAS is enjoying her role as the "throw 'em out" candidate in Savannah’s mayoral race. The former state lawmaker hasn’t been in office for over 11 years. So her campaign is counting on voters sharing her opinion of the municipal status quo: that it’s not good.

“I have been watching and keeping up with what’s going on with the city and I’m just not pleased,” she tells me as we begin talking about a wide range of issues at her Eastside home. “There are too many things that need to be addressed, and all simultaneously.” 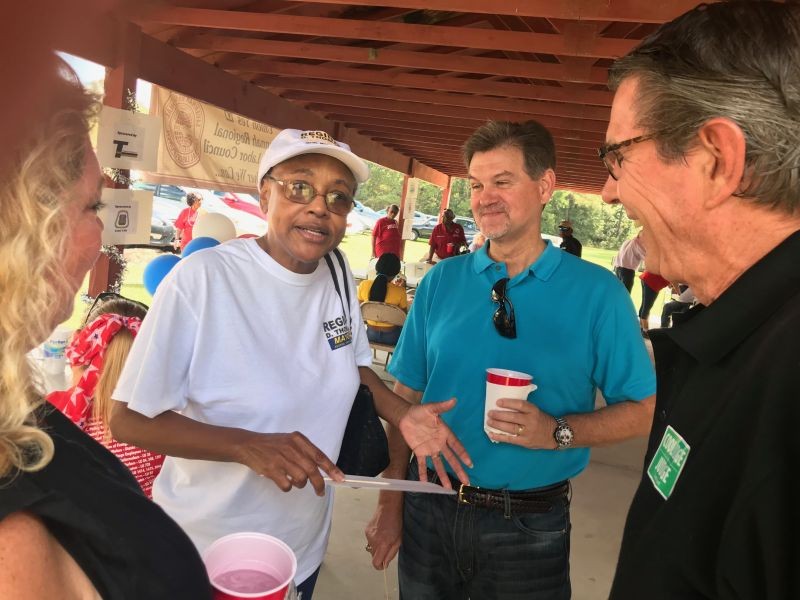 Now, she’s aiming directly at the first-term incumbent mayor, Eddie DeLoach, and the four-term City Council member from the First District, Van Johnson, both of whom have amassed huge amounts of political capital and also are seeking your vote for mayor.

A fourth candidate, Louis Wilson, Sr., received two percent of the vote in the last mayoral election and doesn’t have much of a campaign presence.

Given her time out of the public eye and the nature of Savannah’s run-off system, I felt Thomas needed a backgrounder.

What does she want voters to know about her the most?

“The people should know that they have a level playing field with me,” she tells me. “I don’t have a clique. I don’t have anyone controlling me. I’m not a puppet. I’m not a prisoner to the party I’m in.”

As someone who covered politics back when Thomas (and Bordeaux, Johnson, Pelote and Day, anyone?) was in the legislature and Democrats like her controlled it, I can say that this anti-establishment positioning is consistent with how she moved around Atlanta.

She was the only local lawmaker, and one of the few statewide, to question the Georgia Ports Authority on its environmental damage and how much it actually contributes in local taxes. She also challenged the natural gas industry during its botched deregulation.

She says of deep-pocketed interests like that, “Whoever pockets they’re lining, whoever they’re aligned with, those people go to them and say, ‘Okay, I helped you, now it’s time to return the favor.’ There’s too much of that going on here. That’s why I’m running.”

With that in mind, Thomas is making financial transparency her top campaign item. It’s a salient topic with the city budget facing what has to be called an unsustainable spending vs. revenue track that has us looking down the barrel of either new taxes or deep cuts.

“We have so many contractors and subcontractors on the city payroll that are doing absolutely nothing and no one is asking why,” she says. “We need to have a forensic audit of where the money’s coming from and where it’s going.”

But apart from generalities about fat-cutting and audits, she offers no specific ideas about our looming budget choices. And about our city’s biggest project, the $165 million arena, she likewise treads in well-known territory (drainage, parking) without specific remedies.

I suppose that’s the outsider candidate’s definitive advantage: It’s easier to criticize from the sidelines when you don’t have to sit through actual meetings and take actual votes.

She becomes more animated when we start talking about tourism and housing.

“We absolutely can talk with the developers and the property owners of those hotels and say, ‘We can help you with this but you need to help the people because they need housing,’” she says.

“Development is good. But too much development ruins a city.”

She appears to know her way pretty well around NewZO, the new zoning ordinance, and has specific critiques of it, namely as it relates to commercialization of neighborhoods. She feels that city officials value tourists and hotels more than residents and homes.

But after all the policy spaghetti, we both return to where we started, what she’s clearly having the most fun doing (and I’m having the most fun hearing): Name-checking just about everyone who’s ever been on council, for decades, for inaction and stagnation.

She skewers DeLoach (“more of the same”) and Johnson (“Have you driven through the First District?”) as if they, clearly frontrunners, weren’t sparring in their own slow-motion UFC fight. But in our form of government, they’re both also clearly incumbents.

And in our officially non-partisan, runoff-prone mayoral election, another such result could send Johnson and DeLoach into a dicey December poll.

So her harshest critics accuse her of being a spoiler for Johnson, another black Democrat, against DeLoach, a white Republican.

But I detect nothing in this campaign but her usual political status: outspoken, independent and sometimes on her own.

At a union hall picnic recently, Thomas hugged acquaintances, passed out fliers, ate a hot dog, listened to complaints about service agencies and insisted to me that it’s all not in vain.

A former tax and purchasing professional, once active in many non-profit boards, a tennis and line dancing enthusiast, known by most people as just Regina, she of the stylish hats, Thomas will find out soon if an anti-incumbent mood can return her to public service.