Initially formed as the backing band for mandolin virtuoso Chris Thile’s 2006 album How To Grow A Woman From The Ground, the Punch Brothers stuck together when they realized they had something good.

The band, featuring Thile and a group of equally virtuosic bluegrass musicians, has gone on to record a number of highly successful albums - often blurring the lines between bluegrass, progressive music, classical compositions, and even pop songs. They’ve won Grammy awards and garnered immense critical acclaim along the way. 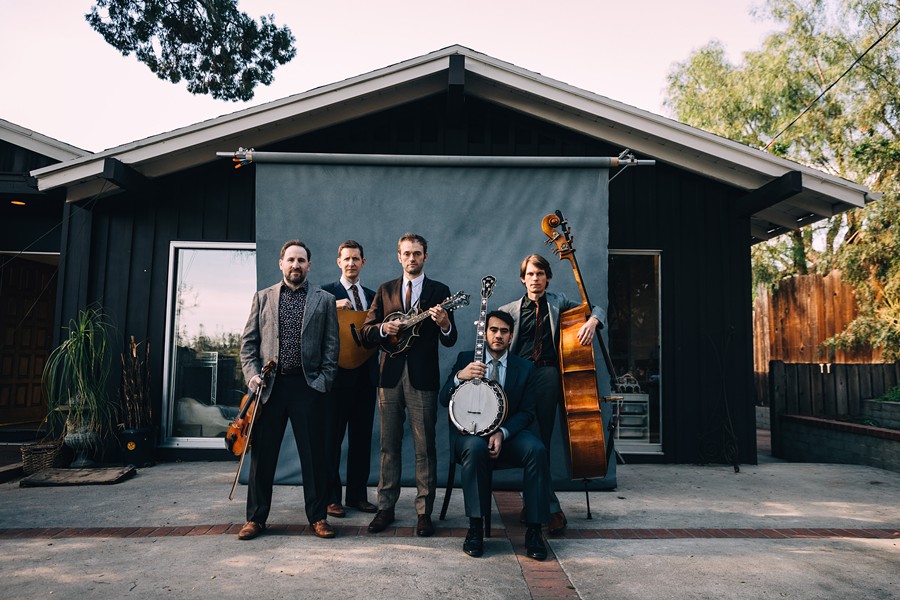 The band is still charging along, releasing their latest album All Ashore in 2018 after a short hiatus to focus on other projects. They seem as energized as ever, and will bring that energy to Savannah Music Festival on Sat., March 30 at the Trustees Theater. Ahead of their performance, which will mark the third time they’ve played SMF, we spoke to banjo player Noam Pikelny about the band’s history, writing process, and more.

How did you all meet? I know the band sort of came together pretty spontaneously, but did you all know each other from that general world of players that you were in?

There were a few long standing connections. The longest relationship went back to Southern California. Gabe Witcher, our fiddle player, and Chris Thile both grew up in the Southern California bluegrass music scene. Those guys would see each other at festivals and concerts and contest, from a very early age. Chris was five and Gabe was seven, or something like that. They’d known each other for twenty years or so at the time the band started.

They’d always wanted to put a project together but weren’t sure exactly what it would entail. I was aware of Chris Eldridge, our guitar player, and met him at MerleFest probaby in 1999 or 2000. I knew him through the festival scene, and then I re-met Chris Thile at the Telluride Bluegrass Festival in 2003 or 2004. I was there playing with the John Cowan Band. There were these late night sets happening, and Yonder Mountain String Band had invited a bunch of guests for their second set. Thile showed up and I showed up, and we played on stage together and then continued jamming all night in the dressing room.

When we met, the ball started rolling on this project that he’d been working on. I think he was dreaming up this piece that became “The Blind Leaving the Blind.” I remember him telling me about this concept early on, and I just assumed that he was going to call the acoustic music superheroes like Edgar Meyer and Bela Fleck to help him fulfill that vision. Little did we know how extensive the process was going to be to work up that record, or that he was also going to be interested in doing it with guys his age.

The thing that I love about this band is that it really pushes a lot of musical boundaries within the bluegrass configuration. New Grass Revival had sort of done the same stylistic thing many years earlier. Was it intentional for you guys to do the, for lack of a better term, “progressive bluegrass” thing? Or did you just feel like you just had a blank musical slate?

I don’t think our intention was ever for it to be progressive bluegrass. And what “progressive bluegrass” means to one person might mean something completely different to someone else. We’re kind of living in a post-genre universe in some ways - mainly because there are no more record bins, unfortunately [laughs].

It used to be that you had to organize music into genres in the record stores, so that people knew where to look. You couldn’t just alphabetize an entire record store and then go try to find a Tony Rice record along with every other jazz or rock record. You’d spend all day just sifting. Now, due to changes in how people consume music, it’s not even part of the process necessarily to figure out what genre you are. People find your music from just clicking through or following a trail of breadcrumbs from other artists.

We had this luxury of growing up listening to people play this very progressive, modern music on these instruments. People like Bela Fleck and Edgar Meyer had sort of redefined what these instruments could do, and I think we just saw an opportunity to be sort of carrying on in the tradition of all of the progressive music that I think bluegrass is innately. It’s innately kind of an amalgamation of all of these influences that Bill Monroe had. That’s the irony of the moniker of traditional bluegrass, because in its essence it’s a very radical and progressive musical statement.

I think Chris felt like, when he was writing “The Blind Leaving the Blind,” that we should start this band by writing for instruments that we knew inside and out. So all of the sudden you had this ensemble that looked like a bluegrass band but didn’t necessarily sound like a bluegrass band.

Is the writing process pretty collaborative for you guys?

Yeah, overarchingly it is collaborative. But there’s a different process for each song, and it always depends on what someone is bringing to the table. The writing process with the band really does happen with everybody in the room. We’re a band that writes most of our music instrumentally first, and Chris is the lyricist.

The whole process really happens with the five people in the room, which might be something that is a little unusual with bands. It’s a tedious process because you’re writing with a counsel of people - it has to pass muster with everybody. We kind of made this decision that we’re not going to record or play any music in Punch Brothers that everybody isn’t on the same page [with] or approving of.

You guys have the luxury of being able to pursue other projects and creative interests in between records and tours - do you see Punch Brothers, at this point, as something you want to see continue for the foreseeable future?

Yeah. It’s my hope and my sense that this band is something we’ll be able to do as long as we’re physically capable of it.

It feels like a musical family. After an album and tour we kind of go our separate ways, but inevitably we’re kind of drawn back to each other to work on music again. That lure is kind of a familial thing. It’s almost like the feeling one gets towards the end of the year, around the holidays. You’re drawn to going home and seeing your family, you want to check in with everybody. It kind of helps ground you.

This feels kind of necessary as part of our music identity. That said, we could have some major blowout on stage and never speak to each other again [laughs].

Exactly! Imagine if that happens at the Savannah show?

Yeah, it’d be a great way to end the tour! It’s the last show of the tour, so it’d be convenient [laughs].