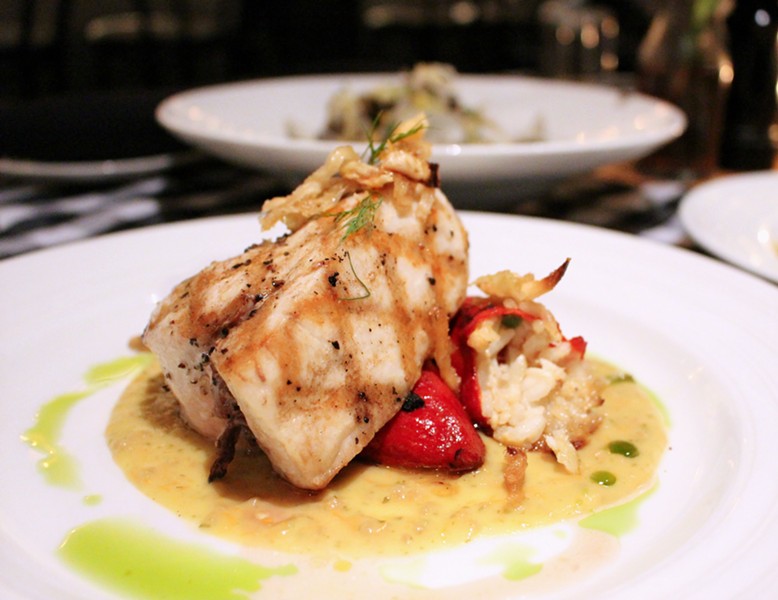 ON THE quiet end of East Bay Street, away from the hustle and bustle of visitors and foot traffic, sits an understated cream square building with modest windows and no apparent entrance.

Yet, a quick turn onto Houston Street, heading towards the historic Washington Square, one will see a large sign, mounted on an over hang, stating “THE BRICE.”

At this point the cream walls shift to a charcoal grey, indicating a subtle separation between the hotel and the restaurant that resides within its shared walls.

The Kimpton Brice Hotel and the Pacci Italian Kitchen + Bar are housed in the formally renovated Mulberry Inn, itself a former Coca-Coca bottling plant. While the Brice boasts an aura of modern Southern charm, Pacci possesses an Italian villa rustic farmhouse vibe. Furthermore, whilst they share the same space, Pacci is run as an independent restaurant, away from the hotel.

“We make simple things that are really good. That’s the heart of Italian cooking,” he tells me.

Based on our region’s environment, with “the plains that grow vegetation well” and the waters that essentially serve as an estuary, Grove believes that “we are in a really good spot for food”.

Grove aims to utilize meat and produce that is locally available, sourcing products from nearby fisherman, farms and suppliers. For example, the fish he uses are from Bluffton, the clams are from Sapelo Island, the pork is from Savannah River Farms, and some produce is from a few raised beds at the West Broad Street YMCA.

“We use what is available to us.” It is with this mindset that Grove has branded Pacci’s fare as Coastal Italian Cuisine.

Savannah native Grove studied biochemistry at the University of Georgia. While there, Grove became involved in a supper club of sorts, in order to meet new people. This weekly gathering prodded him to take a wine education course for continuing education credits.

Gaining knowledge in this area ignited Grove, who started pairing food and wine with some of his classmates. Even more, a friend who majored in horticulture, living in a communal “Garden Home,” gave Grove fresh produce for his new found passion.

This solidified his desire to enter the culinary world.

“I was hooked,” Grove professes.

Grove began his culinary journey working with James Beard award-winning chef Elizabeth Terry at Elizabeth on 37th. There he developed an understanding of each restaurant role, including bar service and back of the house prep.

Terry proved to be a fruitful mentor, enhancing Grove’s knife work by making him time himself chopping vegetables.

“I hated it at the time, but now I think it was genius,” Grove recalls.

Grove developed his expertise further by cooking in a diverse array of restaurants, first in Atlanta and then Florida. These experiences led him back to Atlanta, where he became corporate chef for three privately owned clubs.

Yet Grove could not stay away from Savannah for too long. In 2008, he spent one year as the executive chef at the Mansion on Forsyth Park, then a little over a year at Vic’s on the River, followed by three years managing clubhouses at The Landings Club.

While Grove may not be Italian, he aimed to learn the language in college to “woo women” and had first-hand experiences with this country’s cuisine. Grove worked very closely with Italian chef Gino Noci in Atlanta.

He also had a remarkable opportunity to visit Italy, in order to gleam from their techniques and taste the bounty of the land. Additionally, Grove apprenticed with pasta king Michael White in NYC, learning the craft of hand-made pasta.

As a Savannahian, Grove recognizes the importance of “paying your civic rent.” He believes “there is not enough community involvement and communities are falling apart.”

In order to bridge this gap, Grove refused to sit idly by and allow this to happen.

Take the West Broad Street YMCA for example. The most recent vegetables that he and the local children planted were Italian Christmas beans, squash, and cucumbers.

“The kids can pick and eat fresh veggies over there.” Grove graciously invited the kids into Pacci’s kitchen, where they were wide-eyed and enchanted.

“My hope is they will be more apt to try new foods because they had a hand in planting them.”

Grove also seeks to bring the community together through weekly events hosted by Pacci. On Tuesdays, Grove offers specially priced Pinots and Pastas.

Each week three different pasta dishes are featured with a glass of wine for under $20. Imagine dishes like Braised Beef Rigatoni or Roasted Rabbit Ragu with Sundried Tomatoes and Truffle Pecorino.

The highlight of Pacci’s community events is their Wednesday night Supper Clubs. Aside from being the only formal Supper Club in Savannah, what brings a community together more than sitting around a twenty-foot table, breaking bread with 28 of your neighbors?

“Supper Club is a locals gig. You get to meet people in the community.”

Every second Wednesday of the month, Grove stages a grandiose multi-course meal with wine pairings for about $45.

Each month, Chef features a region in Italy, serving its local cuisine and wine. November’s region is Emilia-Romagna, in Northern Italy, and December is Piedmont, bordering France and Switzerland. Grove aims to expand the well-attended Supper Club to a weekly basis.

It is apparent that Chef Grove is enthusiastic about and inspired by the fare he creates. “In this industry more than any other, you have to love what you do. It’s very stressful, but you have to put it all into perspective,” he says.

Grove often encourages his young line cooks to step out of the kitchen in order to see people in the dining room experiencing their food. “That’s why we’re doing it.”

Grove spoiled my husband and I with decadently rustic Italian food, each plated with precision and sophistication. Initially, we were served Beef Carpaccio, one of Pacci’s signature dishes, from which the restaurant’s name is derived.

Thin slices of raw Wagyu beef were drizzled with creamy, yet pungent, garlic aioli, and topped with arugula and shaves of Parmigiano-Reggiano. Shards of salt enhanced the beef’s natural flavor profile, making it exceptionally memorable.

Following this dish, we shared the ingenious Asparagus Carbonara, which was a play on the classic, minus the pasta. Also a signature dish, this bundle boasted creamy and savory ribbons of carrot, asparagus, pancetta, and onions. The poached egg on top oozed rich yolk when cut. The unifying flavor was the sweetness from zabaglione, comprising whipped egg yolks, sugar and Marsala wine.

Chef Grove then served us with three pasta dishes and one fish entree.

The house made Linguini with briny Sapelo clams and green olives in a white wine sauce was vibrantly effervescent. This is an olive-lover’s dream, as the green olive permeates every tantalizing bite.

Stracci, meaning rags, is a pasta dish in which the scraps of dough from other macaroni are resourcefully mixed with garden peas and thick slices of 18-month old Parma Ham. These were then tossed in a sumptuous black truffle cream sauce.

Then handcrafted “Rooster’s Crest” pasta was served with slices of Savannah River Farms sausage and broccolini, all in a white wine sage sauce. This was truly a comforting bowl of delicately layered familiar flavors.

Lastly, we dined on a thick and juicy grilled Swordfish steak. This mild fish was served with sweet piquillo peppers stuffed with crab and rice. The finishing touches of toothsome candied fennel and ripe yellow tomato coulis were simple but brilliant.

As evident in the food he produces, Grove’s science background allows him “to break flavors down into parts and piece them back together on a plate.” His innovation and passion are unmistakable.

Grove knows that “if a chef is bored, you can see it.” This Chef is clearly anything but bored, as his inspired dishes made us feel as though even the last bite was as new and exciting as the first.