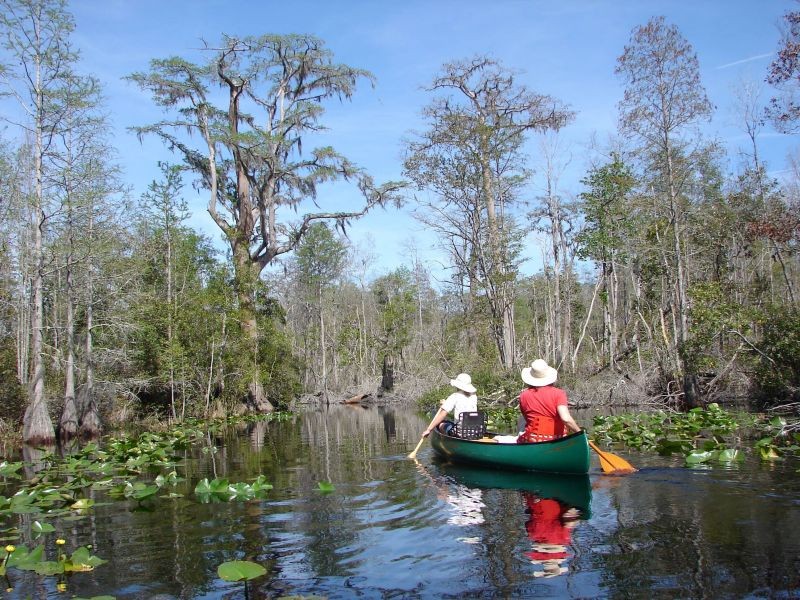 NATIVE AMERICANS gave the mist-enshrouded and black-watered Okefenokee Swamp its fearsome name: Land of Trembling Earth, referring not to earthquakes, but unstable peat deposits that line the swamp floor and tremble underfoot.

These days, friends of the vast bog, one of the oldest and best-preserved freshwater ecosystems in North America, are trembling because its age-old enemy, humankind, has returned to extract it and get rich.

Twin Pines Mining Co. has proposed a 2,414 acre titanium mine about 2.7 miles away from the Okefenokee National Wildlife Refuge on a natural land formation called Trail Ridge, the ancient shoreline and hydraulic barrier that acts as the “lip of the bowl” when it comes to the swamp’s groundwater.

It’s all about hydrology in this wetland. And that’s why friends of the Okefenokee came in force to a public meeting in Folkston.

“They’re telling us they’ve put together a model dealing with the hydrologic aspects of the site but we haven’t seen any of that,” says Bill Sapp of the Southern Environmental Law Center, one of the groups watching this closely.

“They’ve got four different studies that haven’t even been completed yet. How can the public comment on this project when they don’t even know if there’s going to be a hydrologic impact on the swamp?”

On Aug. 15, however, the Charlton County Commission ended up voting to allow the proposal to move forward.

Whether the mine continues to go forward is up to the U.S. Army Corp of Engineers (USACE), which is collecting public comments on the mine proposal through September 12.

All the studies so far have been done by a paid consultant of Twin Pines. There’s been no (what’s called in federal-speak ) EIS, or Environmental Impact Statement, a formal and independent analysis carried out under federal law. The USACE could require an EIS if they chose to.

“It’s absolutely critical that they do an EIS in this case,” Sapp says. “We have got to know what this mine could do to the Okefenokee Swamp.”

In their comments to the USACE, the U.S. Fish and Wildlife Service wrote, “We have concerns that the proposed project poses substantial risks for significant affect to the environment.”

The wildlife agency also quoted former Interior Secretary Bruce Babbitt, who said “Titanium is a common mineral, while the Okefenokee is a very uncommon swamp.” Babbitt spoke 20 years ago when mining last threatened this unique ecosystem.

Will Trump’s enviro-chief champion “water level and holding capacity,” the indigo snake or anything else mentioned in the lower-level USFWS document apparently issued from that bustling corridor of power and influence, Townsend, Georgia?

“The political climate has changed,” says Alex Kearns of St. Mary’s Earthkeepers. “The Trump administration has called the lack of domestic titanium a national security issue.”

Steve Engle, President of Twin Pines, pointed to defense aviation as just one potential use for the minerals that his company would like to extract from Trail Ridge. Paint pigments and pharmaceuticals all get manufactured with titanium.

Engle says he’s 100% confident the mining, once completed after eight years of “dragline excavating,” “topsoil removal” and “conveyor materials transport” not only won’t harm the area, but will improve it.

“What we’re proposing to doing with our mining activity on this is to re-establish these areas in our post-mining reclamation to what it was to pre-silviculture [timber extraction] time, to try to mimic what it was before it was totally destroyed.”

So, the question becomes, if he’s so confident, why not agree to an EIS? “All the studies that we have done so far have been in accordance with the methodology of an EIS,” he says.

“Those [state and federal environmental] agencies provided us comments with their concerns. And then we took those concerns totally to heart and designed our monitoring project with every concern that they had.”

He’s asking you to trust his heart.

I myself would trust those who work not for money but for the calling heron and ibis, the prickly scrub shrub, lazy Suwannee, the sunning alligator and the feisty bowfin. That’s the USFWS and a proper EIS.

Tremble not to submit a comment using the means below. And please acquaint yourself with this fragile, sprawling Wilderness, Georgia’s largest, about two hours from Savannah — hopefully in the morning or under clouds. cs