NON- is a musical amalgam without any exaggeration. The band, founded by Jack Whelan in 2015, fuses elements of black metal, post-punk, shoegaze, 90s emo, and screamo in a way that sounds like it hasn’t quite been done before.

What started as a bedroom project for Whelan has taken on its own life thanks to powerful production, emotionally and socially-charged lyrics, and a unique approach to heaviness and melodic intensity.

The Boston-based band is headlining a special show at Civvies on Wed., Jan. 8, alongside SEED, soundaltar., and Love Cosma. The show will include a pop up shop from Sol Flair Jewelry, as well as a clothing swap.

It’s another stellar show for Civvies, who have started hosting touring and local bands as an all-ages alternative to traditional clubs and venues in town.

Ahead of the show, we caught up with Whelan to learn more about their ambitious and enthralling band, and why representation matters in heavy music. 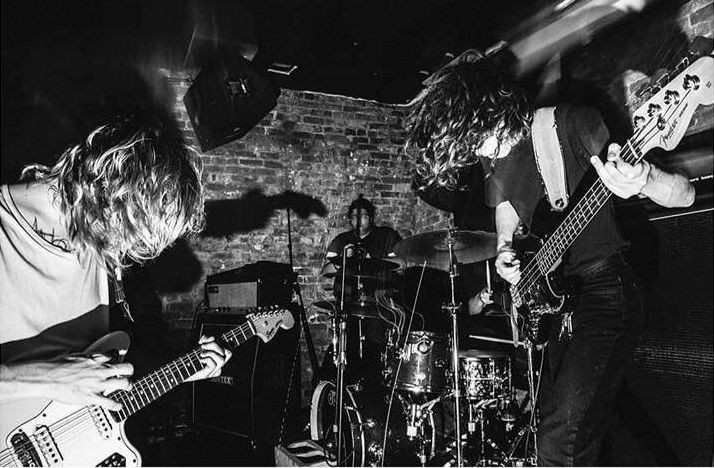 So this started about four years ago?

Yeah, it started with me in my bedroom just super depressed and writing atmospheric black metal tunes. I wasn’t even very good at guitar at that point, but as I was starting to write music that was just outside of what I was able to play, I started bringing in some of the old Midwestern emo stuff I was into, the screamo stuff, and the shoegaze stuff. I stopped thinking about what I was writing and whether or not it fit into a genre.

It seems like it does have sort of a “no holds barred” thing to it. Did you come from other bands, or was that truly your starting point musically?

I was in a band previous to that called Dent, and I was the drummer. That was much more of a kind of frenetic punk-meets-black metal sort of thing. I was in that band with Lane from Elizabeth Colour Wheel; that was her first band, and then ECW got really big. While we were in the midst of that band, I started writing music of my own and bouncing ideas off of Lane.

It sounds like Non- wasn’t really a conceptual thing necessarily—was there some level of wanting to do a certain musical thing?

Well, the initial impetus was that I wanted to be making my own music. I like being in bands, but in the platitude of a tortured soul, there’s something that needs to get out. Musically it’s semi-conceptual, but a lot of why I write is a lot more conceptual. The first few EPs definitely had a binding thread to them. Each body of work has thematic ties holding it all together. We’re working on a really big record right now that’s definitely thematic, and some of the most ambitious and genre-defying stuff we’ve done.

When you go into a studio to do a project like that, do you reference certain records or songs and source inspiration sonically speaking? Or do you just plug in and play and find the sound as things progress?

I kind of like to be left to my own devices, you know? If you listen to something too often, it has in the past colored things that I’ve written. Some of the stuff that really, really inspired me was bands like Krallice. Coming back to those records, like Dimensional Bleedthrough, definitely inspired me a lot. But even with some of the stuff we've been writing now, I've been listening to a lot of folkier stuff like Sun Kil Moon and those Big Thief records that came out this year.

You mention Sun Kil Moon—everything Mark Kozelek does, whether it's that project or Red House Painters, has this very melancholic vibe and it's for the most part very poetic. Does that sort of approach to lyrics inspire you?

Especially nowadays with the stream-of-consciousness singing that he does, there's a beautiful monotony to what's going on. The emotional capacity comes from the storytelling or the small inflections in his playing.

On a lyrical level for you, what subjects, etc do you find yourself gravitating towards at the moment?

I have a really hard time with nightmares, so a lot of the thematic stuff from the first EP was reconciling with some of the nightmares that I had. A lot of them had to do with trauma, gender, and that sort of thing. A lot of it is analyzing the extent to which introspection is healthy and unhealthy. Some stuff that I've been writing about now kind of deals with guilt and culpability. Living with trauma and mental illness, there's a lot of flatline in terms of intensity. That's a lot of what I've been dealing with lately.

I think those are things that are really relatable to lots of people in various ways, whether it has to do with trauma, mental illness, or things like gender identity. It's important to talk about that stuff, too—as much art can reflect people's realities as possible is never a bad thing.

The big thing for me is seeing these kind of spaces of commiseration in areas that even five or ten years ago it was hard to find representation for. You don't see a lot of people exploring gender and sexuality in heavier styles of music. I mean, you see it more nowadays because the tides have been changing. I would never, for the sake of comfort, find a way to downplay those ideas. The lyrics are visceral—extreme music is hard to listen to and it shouldn't be a comfortable thing. I don't want to cut corners. In that extreme space, I think there's a lot of capacity to find comisuration and catharsis.