Match made in burlesque heaven

THIS weekend, Tied and Tasseled Fetish Cabaret partner with Beers and Babes for a heavy-hitting weekend of burlesque.

The fun starts Thursday at Club One with Full Metal Tassel, the troupe’s season opening show featuring performances from every era of metal music.

The next night, Savannah gets its first burlesque bar crawl led by members of Tied and Tasseled and other local burlesque performers. The starting point of the bar crawl is El-Rocko, but everything after that is a mystery, since the tour is up to the performers leading it.

The partnership was an easy choice for Beers and Babes organizers Leisha Bananas and Sadie DeSade, who cemented their decision at a Tied and Tasseled show.

Performer Rose LaRuse was emceeing for the night and dealt with a heckler particularly well. Bananas and DeSade decided then and there that they wanted LaRuse to emcee their first show, and the partnership has flourished ever since.

Since their first show on Halloween weekend of 2014, Tied and Tasseled Fetish Cabaret has sought to push Savannah’s collective boundaries. 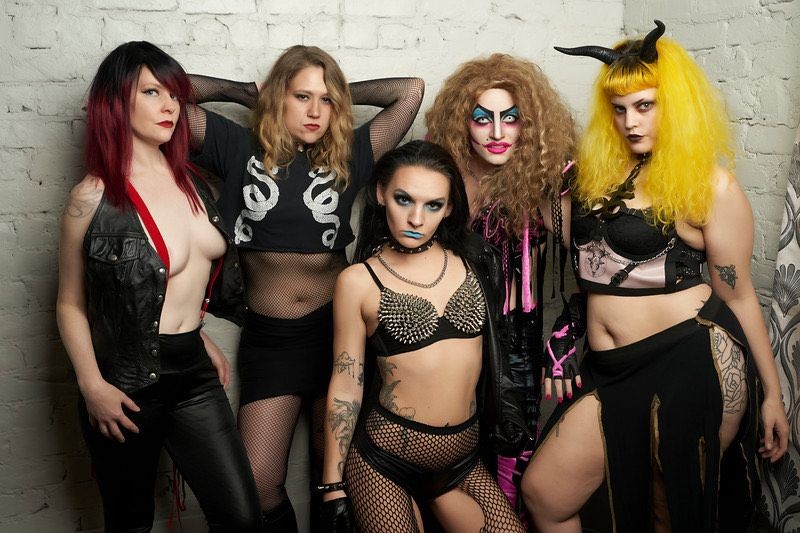 The performance troupe incorporates neo-burlesque dance with elements of fetish for a show that’s probably unlike anything you’ve ever seen before.

In fact, fetish cabaret is nothing like 50 Shades, which is watered down to make kink more palatable for a wide audience. Tied and Tasseled performs shows every other month, and between those, they host fetish parties, which is an exploratory night for anyone interested in the idea of fetishes to see what it’s all about.

“Those build the community because we’re trying to create a safe space for everybody to come, people that are brand new and just figuring it out to people who have been in the community,” explains von Bleu. “Obviously, we’re in a public space so we’re limited to how far we can take it, but we definitely push the limits.”

Fetish parties are totally confidential and open to anyone who’s interested in joining or watching, even those who think that seeing “puppies” at the party means that there are some dogs in the bar (spoiler alert: it doesn’t).

“The last one we had, we had a lot of puppies there, which was a first,” remembers von Bleu. “They just came down the stairs. Any other place, you say ‘puppies’ and they think puppies, but it’s totally different.”

One of the struggles that Tied and Tasseled faces is censorship. von Bleu notes that most places don’t even say the word “fetish” when introducing their troupe, which is a major problem—if a venue can’t even bring themselves to say the word fetish, would they even be willing to host a fetish party or performance?

“I think the issue is that there aren’t enough spaces for performance—not just drag, not just cabaret. There are not enough physical, actual stages that are alternative friendly, whether it be queer spaces or sexually positive spaces,” says Bananas.

The lack of alternative-friendly performance spaces has been compounded by the recent announcement by the Jinx that they’ll only book one drag or burlesque performance a month in an effort to get back to booking musical acts.

DeSade, a member of the Savannah Sweet Tease Burlesque Revue, has performed on the Jinx’s stage multiple times and understands their perspective.

“The Jinx wants to go back to being a predominantly music venue, and I understand,” she says, “but it’s limiting for the rest of us because we’ve found such a haven in that bar opening its doors to us. People have come to understand it as the burlesque bar in town, as opposed to the gay bar, which will always be Club One.”

As spaces for shows like this dwindle, the importance of events like the Burlesque Bar Crawl become more clear.

“You have overhead going into a show, and we’re trying to offset those unexpected expenses that ultimately cut into how much you can pay the performer,” says DeSade. “By doing things like a bar crawl, we can fund these mutual collaborations.”

In turn, collaborations like these strengthen the Savannah’s burlesque community, already a tightly-knit group.

“We’re not trying to compete with [Tied and Tasseled], we’re trying to help bring more diversity to Savannah in general via burlesque, which is why we created Beers and Babes because it’s not your typical burlesque show,” says Bananas. “Our goal is to be predominantly in breweries, and because it’s a big open space, we found it works very well and it’s different. It’s bringing that variety into it.”

Part of the excitement of the Burlesque Bar Crawl is that participants will be able to learn more about the performers who were just on stage the night before. It’s a great opportunity to ask questions that might otherwise remain unanswered.

“If you don’t know a performer, how else are you going to ask these questions that may seem awkward or untoward?” asks DeSade.

Ultimately, the weekend is all about the love of performing.

“I couldn’t say it better for myself,” laughs DeSade. “When I get onstage and I pour a bunch of corn oil that smells like butter on myself with a bunch of yellow glitter, I do that for me and you guys are all just privy to it.”