THIS WEEK’S opening of Shakespeare’s Macbeth — known in theatre superstition as simply "the Scottish play" — is the culmination of one of Savannah's most ambitious theatrical projects.

In 2015, Christopher Soucy and Sheila Lynne Bolda of the group Savannah Shakes had the crazy idea to do a four-year cycle of Shakespeare productions, progressing through chronological time.

They began with Taming of the Shrew, set immediately after WWII.

After seven more productions over the following years, their most recent production was Measure for Measure, set in the present day.

They end the cycle with a Star Wars-style Macbeth, set in the science fiction future.

The match is tailor-made, Macbeth being Shakespeare’s shortest and most tightly-written tragedy.

Soucy, who plays the titular medieval noble, fell in love with the Scottish play at an early age.

“The first time I ever read it as a child, I was like, hey I can follow this! It’s shorter than Shakespeare’s other plays, it’s easier to digest. It doesn’t waste time on a lot of subplots, or comic relief sections,” Soucy recalls.

The plot revolves around the Scottish warrior/noble Macbeth and his wife, Lady Macbeth, and various machinations for him to kill the king of Scotland, Duncan, and take over the throne himself.

Guilt and betrayal are the main themes, with Lady Macbeth’s famous “Out, out damn spot” sleepwalking monologue being one of the most immortal — and accurate — summations of the effect of guilt on the human psyche.

There’s a touch of the occult as well, with the play’s trio of prophetic witches and their “Double, double, toil and trouble” mantra.

And did you know? “The knock-knock joke comes from Macbeth,” says Soucy, of the character known as The Porter and his attempts to entertain himself.

“The best science fiction is still about relationships grounded in humanity,” says Travis Spangenburg, who directs Macbeth. “One of the chief struggles in almost any science fiction storyline is that all the terrible things people do in the present, will follow us into the future.” 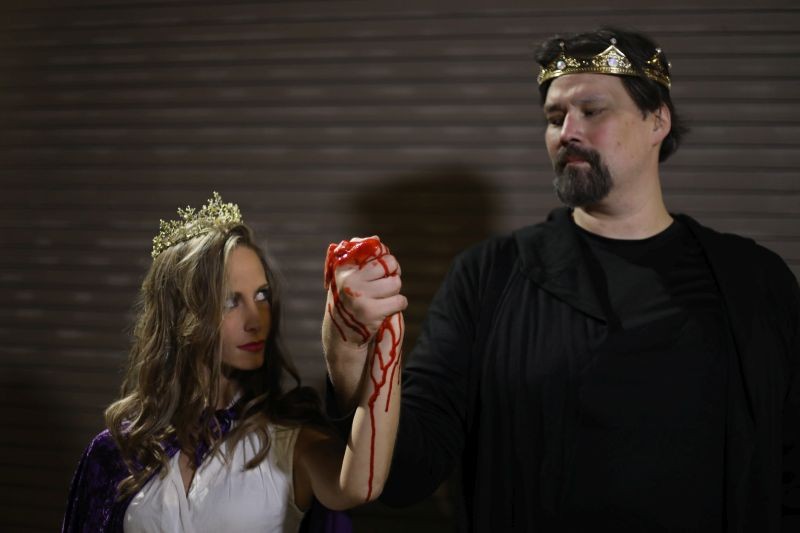 As director, for Spangenburg “the key thing was to keep the roles in Macbeth basically the same. For example, a soldier in 11th century Scotland should also be a soldier in a year 2500 reimagining.”

The only slight change, he says, “was with the witches, who are sort of spiritual aliens, humanoid figures but clearly different. When they appear, I want them to be wholly unique.”

For Spangenburg as well as Soucy, the sci-fi setting isn’t as much of a stretch as you might think.

“Chris dreamed up this sci-fi concept for Macbeth. After I thought about it awhile, I began watching some classic science fiction — Star Wars, Star Trek, Battlestar Galactica, things like that — and I could imagine a really cool mixing of the best things about classic sci-fi,” Spangenburg says.

“Macbeth has some of the classic sci-fi storylines,” Soucy adds. “Betrayal, abandonment. You almost have the whole Anakin Skywalker to Darth Vader thing happening, as Macbeth transforms from a good-hearted person, a valiant hero, to someone much more dark and complex.”

Scholars have argued for years about the role of Lady Macbeth. The old point of view sees her as a manipulative, hen-pecking wife with murderous intent, pushing her husband to do her dirty work for her.

More modern takes, however, see the complexity in Lady Macbeth.

“We want people to see Lady Macbeth’s humanity, and why she might want all this to happen,” says Spangenburg.

“We need to see that team of the two of them, and how it crumbles. The truth is that of all Shakespeare’s couples, Macbeth and Lady Macbeth are probably the most functional — they really seem to love each other.”

“In a sense, she is the protagonist,” says Soucy. “Without her, Macbeth spends much of the time denying the call to kill a king. He’s like, ‘I can just wait — the witches talk about my fate, why not let fate do the work for me?’”

While the Star Wars-like homage is unmistakeable, you won’t find any copyright infringement in this production.

“It’s a wink and a nod, but just a wink and a nod,” says Soucy. “But they do make fully functional light sabers now, that people have full-on combat with all around the world. I thought, wouldn’t these be perfect for stage combat.”

This is Spangenburg’s tenth show with Savannah Shakes in some capacity — he’s an alumnus of all of them.

“The only show I’ve directed was Titus Andronicus,” Spangenburg says, referring to Shakespeare’s most notoriously blood-soaked play, which Savannah Shakes performed in 2017 as a tribute to the grindhouse movie era.

“I joke that I refuse to direct a show unless it has an awkward dinner scene.”

In another interesting twist, this performance of Macbeth is completely free to attend.

“From the beginning of Savannah Shakes, we talked about accessibility, whether it’s in the frame of reference or the setting, or in the literal accessibility — as in, what’s more accessible than free?” says Spangenburg.

“We decided we’d rather have a full house than a full pocket,” laughs Soucy.

“We did use a Kickstarter to help recoup some costs. But we never make any money doing this anyway,” he jokes. “So why not make it free?”

The play’s nickname among theatre people, the “Scottish play,” comes from an old superstition that it will guarantee a disastrous, cursed production if you utter the word “Macbeth” while inside the theatre.

“There are people who really go bananas if you say it,” laughs Soucy. “But I looked into the superstition, and it supposedly only applies if you’re in the theatre but not working on a production of Macbeth.... think about it: How are you supposed to rehearse Macbeth if you can’t say his name when it’s in a line?”

The performance is free to attend, but seating is limited. Make a reservation by calling (912) 346-5954 or emailing savshakes@gmail.com